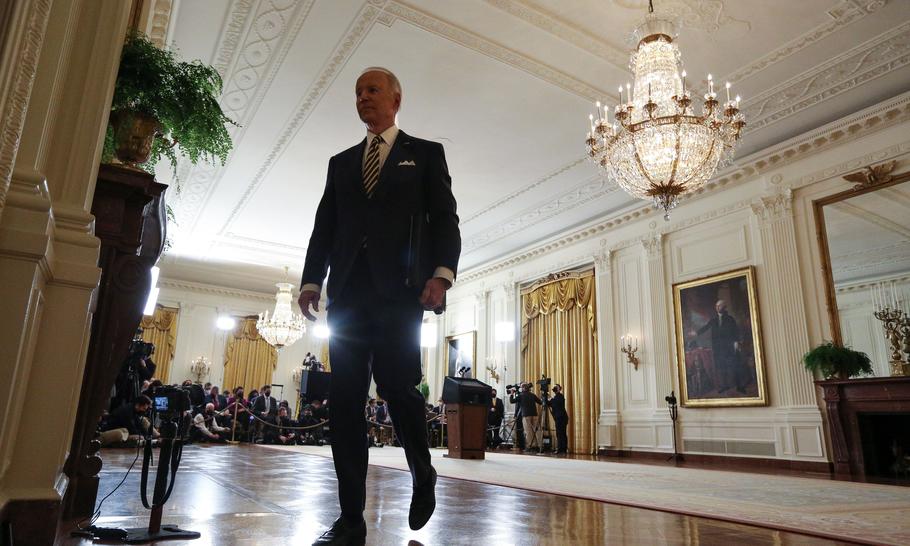 Nobody knows whether Vladimir Putin will launch an invasion of Ukraine — possibly not even the Russian President himself. As Robert Fry argues in an important strategic assessment today, any such invasion and subsequent occupation would be fraught with hazards for the Russians. As a Lieutenant General with experience of several wars, including Iraq and Afghanistan, Sir Robert knows what he is talking about. So I shall leave the military analysis to the soldier in order to focus on the politics and diplomacy.

Here what was a clear-cut situation has recently become utterly confused — and not in a good way. At a disastrous press conference on Wednesday, President Biden suggested simultaneously that Putin probably would “move in” to Ukraine, that Nato was hopelessly divided and implied that the alliance might not retaliate at all if there was a “minor incursion” rather than an “invasion”. It is hard to conceive of a worse example of mixed messaging. Indeed, Putin may be inclined to think that he has already won without a shot being fired.

What was Biden thinking of when he lifted the lid on what must have been strictly confidential conversations with other Western leaders? And what did he mean by distinguishing between an invasion and an incursion? “It’s one thing if it’s a minor incursion and we end up having to fight about what to do and what not to do,” he mused. In Kyiv, where the Secretary of State, Antony Blinken, was meeting President Zelensky, the Ukrainians were aghast. An unnamed official there told CNN that Biden had just given “the green light” to Putin.

How did the Commander in Chief suppose his speculation about nuclear war would be received in the Kremlin? “I am hoping that Vladimir Putin understands that he is — short of full-blown nuclear war — he is not in a very good position to dominate the world. It is a concern…” This was another own goal: nothing could be easier than for Putin to mock the leader of the West for accusing him of world domination, when he is merely dealing with a little local difficulty.

Equally muddled was the suggestion that the Russians “had to do something”. Why? Officially the massing of Russian forces on the border is a purely internal affair, a mere exercise, which could all be scaled down again without loss of face. By raising the stakes, Biden has made it more likely that Putin will gamble on a token response from a weak and divided Nato, which will leave the Ukrainian Army, outnumbered and outgunned, to its fate.

Worst of all was the implication that Nato is so lacking in unity that “we have to be very careful about how we move forward in making clear to him that there are prices to pay”. What is that all about? During the many weeks of diplomatic exchanges (including phone calls with Putin not only involving Biden but all the major European leaders) one simple message has been consistent: if the Russian Army invades, its economy will be crippled by sanctions.

Until now, that is. We learned earlier this week that, in deference to Germany, the US has dropped its threat to cut off Russia from the Swift international banking system. But the assumption was still that other, almost equally severe sanctions would automatically be applied. Now it looks very much as if a graduated response is contemplated, with anything short of an armoured offensive towards Kyiv resulting in no more serious consequences than the annexation of Crimea and de facto occupation of the Donbas in 2014. If that is indeed what the White House has in mind, Ukraine is now as good as abandoned and, at no cost in blood or treasure, the Kremlin will have pulled off its greatest diplomatic triumph since the end of the Cold War.

The American tendency to treat Europe as a single entity has seldom been less appropriate. The new Social Democrat-led coalition in Berlin has apparently refused to permit RAF planes to overfly Germany in order to supply purely defensive anti-tank weapons to Kyiv. While Chancellor Scholz has been tight-lipped, it is clear that behind the scenes he has been urging an ultra-cautious policy, not only because of the notorious German energy dependency on Russia, but also because of business lobbying. The new German opposition leader, Friedrich Merz, appears particularly eager to appease these vested interests. The Germans hold a trump card: the Nordstream 2 gas pipeline. Yet they seem disinclined to allow it to come into play in negotiations with Moscow.

As for France: President Macron has just announced his own side-deal with Putin. This week he proposed a “new security and stability order” between the EU and Russia. As France holds the European presidency, this proposal is bound to be seen as an attempt to cut the US and UK out of the picture. It is the worst kind of unilateral French initiative and it has more to do with Macron’s election campaign than with Ukraine’s security.

Where does this leave the British Government, which has been notably more hawkish than its US counterpart, let alone our “friends and partners” in Europe? Not in a good place. Boris Johnson is fighting for his political life. The defence establishment is worried about possible miscalculations by the Russians. The Foreign Secretary, Liz Truss, is said to be angling for a visit to Moscow, but as she can see from the failed attempts by Secretary Blinken and NATO’s Secretary General Jens Stoltenberg, the Russians are in no mood to make concessions. The time for jaw-jaw is visibly running out.

Perhaps the last and only chance of preserving peace in Europe and preventing potentially the most dangerous crisis since 1945 is for us to rekindle the old Special Relationship. Biden and Johnson should issue a joint declaration by the US and the UK that they stand by the 1994 Budapest Memorandum, which both nations signed and which was also signed by Russia, to guarantee Ukrainian sovereignty.

No ifs or buts. Let Putin be in no doubt that an invasion of Ukraine would be an abrogation of a solemn international agreement and leave Russia as an outlaw, a rogue state, with all the consequences that implies. Does Putin wish Russia to become another North Korea, excluded from the comity of nations? Or will he stand down his armies and talk seriously? The ball belongs in his court, not NATO’s.