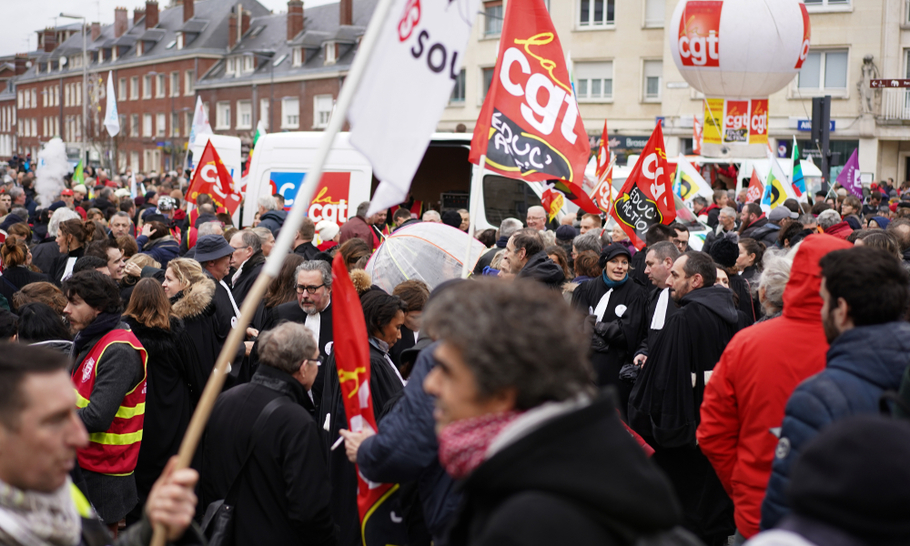 On a foggy December day, 800,000 protesters of all ages, backgrounds and professions took part in the biggest display of union strength in nearly a decade, defending what they call the hard-won French way of life.

Rail workers, air-traffic controllers and public sector staff brought the country to a standstill with an open-ended strike, prompting transport chaos and prospects of fuel shortages. A showdown was on the cards even before the protestors knew the finer details of President Emmanuel Macron’s planned pension overhaul.

Opinion polls showed that seven out of 10 French people supported the strikes when they began, while 76 per cent conceded that their post-war retirement system was hardly sustainable without any reform. So what can France do about its colossal, creaking pensions system?

France spends 14 per cent of its gross domestic product on public pensions, compared with an OECD average of 7.5 per cent. Between 1950 and today, the worker-to-beneficiary ratio went down from four job holders for every pensioner to to 1.7. While birth rates have dropped since 1973, retiree numbers have tripled and are forecast to reach 25 million by 2060.

France has more pensions to pay of and fewer employed people to generate the tax revenues to pay them: if no immediate action is taken, it will run a deficit of more than €17bn (£14.4bn) by 2025, warned former pension czar Jean-Paul Delevoye in his recent report.

Almost every president has tried to defuse the ticking time bomb, including Jacques Chirac, who infamously caved in to demonstrators back in 1995.

But now, Macron, having secured his labour, tax and unemployment reforms despite waves of demonstrations, faces his most daunting challenge to date: the transformation of the Byzantine system he deems to be “a relic from another era”. Indeed, it is a core campaign pledge.

Since 1945, French job holders and employers have paid pension contributions from their income. After 41 to 43 years of chipping in, workers are entitled to a full state pension, which averages at €1,500 (£1,267) gross per month. This amounts to 60.1 per cent of pre-retirement earnings, compared to 21.7 per cent in the UK or 38.7 per cent in Germany.

As a consequence of its welfare policies, France features one of the lowest at-risk-of-poverty rates for pensioners in Europe: 7.3 per cent compared to a 15.2 per cent EU average. French retirees receive entitlements for around 26.5 years, as life expectancy continues to rise.

A total of 17 million people are currently enrolled in the general system, with another 4.2 million belonging to one of the 41 other sector-specific schemes which have been granted to air crews, mariners, dockers, civil servants, energy workers and many others as compensation for  tough working conditions.

Doctors and lawyers also have tax cuts. Ballet dancers can retire at the age of 42 and train drivers at 52. Critics say that such early retirement schemes is not only costly but also anachronistic, pointing, for example, to rail workers who no longer endanger their health operating coal-fired steam locomotives.

Macron wants to implement a “much fairer and accountable” Swedish-like universal points-based system under which every pensioner gets equal rights for each euro contributed. Prime Minister Édouard Philippe likes the notion of replacing “solidarity with certain professions with national solidarity”.

Millions are still worried that a change in calculation will diminish their pensions. The government has promised that some social benefits will be preserved, notably for the military and police. Unemployed, sick and disabled people will also gather points, as well as parents in a bid to compensate for maternity leave.

Macron stopped short of raising the legal retirement age, an explosive topic for unions. Lowered from 65 to 60 years by François Mitterrand in 1982, it is still among the lowest among the OECD countries despite having been raised to 62 by conservative Nicolas Sarkozy in 2010 after days of strikes and protests.

The Prime Minister has offered a few concessions, announcing that he would no longer seek to restore financial equilibrium by 2025, and that the reforms would only concern people born after 1975, instead of 1963 as initially designed.

Philippe also unveiled a controversial system aimed at convincing workers to retire 24 months later than they are entitled to, at 64 years old. This would act as a “pivot age” at which benefits could be unlocked. Work less and you get less. Work more and you’ll get more.

According to the economist Patrick Artus, an additional six months on the job would be sufficient to make the pension fund deficit vanish. In interviews, he has also questioned the logic of focusing on retirement age instead of the contribution period.

For now, the government is playing the clock down, claiming it is willing to compromise while knowing that strikers already suffer the financial burden of their exhausting fight.

In this power struggle, protesters can, however, boast about breaking a symbolic record: with no end in sight, their action is set to go down in history as the longest uninterrupted transport strike France has ever seen. Now, that’s saying something.