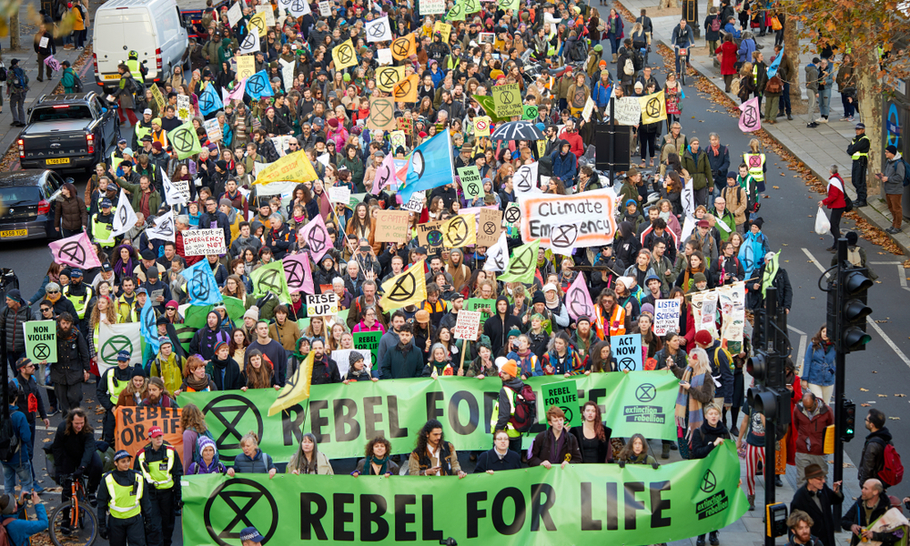 The rule of law is the keystone of civilisation. This week it has been called into question by the Extinction Rebellion protests in London. While police looked on, hundreds of climate activists have occupied Oxford Circus, blocked Waterloo Bridge and brought traffic in the capital to a halt. Today they have threatened to do the same at Heathrow, potentially ruining countless family holidays.

Londoners have reacted with characteristic decency to this disruption of their daily lives. There has been no violence, although several hundred demonstrators have been arrested. Gentle handling by the Metropolitan police is preferable to the brutal coercion by their French counterparts at the gilets jaunes marches in Paris. And there was something very British about the eccentric idealists who glued themselves together and chained themselves to Jeremy Corbyn’s fence, then burst into tears when the Labour leader declined to meet them and his wife Laura refused their gifts of Easter eggs.

After several days of protests, however, most people’s patience at the spectacle of mass defiance of the law is wearing thin. Why don’t the authorities do anything to keep the capital running? The Home Secretary, Sajid Javid, has called for “the full force of the law” to be applied. The police reply that they can only use “reasonable force” to control peaceful protests. Some suspect that the Mayor of London, Sadiq Khan, has encouraged the police to take a “softly, softly” attitude to Extinction Rebellion for political reasons, in the hope that voters will not blame him, but the Government. Yet public transport and policing in London are responsibilities of the Mayor.

What is most striking about the Extinction Rebellion zealots is their sense of entitlement. They openly defy the law, knowing that they are unlikely to suffer its full rigours. This raises wider questions which have exercised the field of jurisprudence ever since the idea of the rule of law was first given political expression at Runnymede, when King John signed Magna Carta.

By coincidence, this week Britain’s finest legal thinker was speaking in public about a very different but equally vexed area of law, that of assisted suicide (or “assisted dying”, as its advocates prefer to call it). Jonathan Sumption, who has recently retired from the Supreme Court and is widely acknowledged to be the best lawyer of his generation, is this year’s Reith Lecturer. Responding to questions after giving the first of his lectures, Lord Sumption startled his audience of judges and lawyers at Middle Temple by placing conscience above the law.

“I think the law should continue to criminalise assisted suicide,” he told them. “And I think that the law should be broken from time to time.” Describing this view as “an untidy compromise few lawyers would adopt”, he added: “I don’t think there is a moral obligation to obey the law…ultimately it is for each person’s conscience.”

The rest of us must wait until next month to listen to Lord Sumption’s reasoning in his Reith Lectures, to be broadcast on BBC Radio 4. But it is no secret that the Supreme Court has refused to rule on the case of Noel Conway, a victim of motor neurone disease, whose lawyers argued that the law was depriving him of his human right to die. The Court, evidently reflecting the thinking of Lord Sumption, has handed the matter back to Parliament. Unless there is new legislation, the law remains the law — but it may be broken.

There will be those who will criticise Lord Sumption for appearing to undermine the rule of law. After all, if people can break one law, why not another? But this great judge is hardly naive. Among his many accomplishments, he is a historian of distinction, author of a multi-volumed history of the Hundred Years’ War. He is well aware of what can happen to a society when the rule of law collapses. But he is right to say that people always face a choice: do I feel so strongly about a political or moral matter that I am ready to break the law and accept the consequences?

Those consequences may be more or less severe. In the case of those desperately concerned about a sick family member, the law may be interpreted mildly. But those who break the common law, or even deliberately risk human life by disrupting airports, must expect to be punished and to acquire a criminal record. The law must not be defied with impunity. But Lord Sumption is correct that obeying the law is not a moral obligation, but a moral choice. In a free society, the highest court is always the court of conscience.