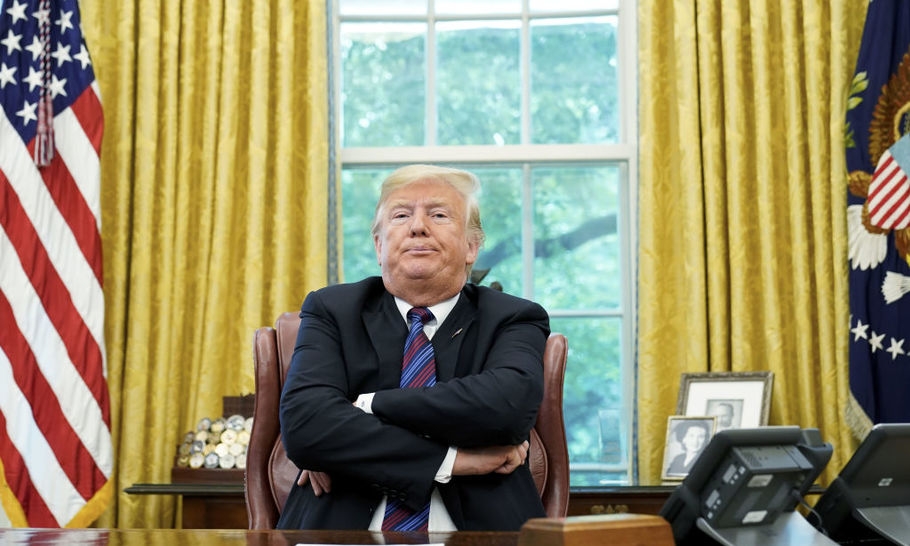 For a short window in late July, President Trump acted differently, and he dramatically changed his tone about the pandemic.

On July 20, Trump tweeted a picture of himself wearing a mask, and declared, “many people say that it is Patriotic to wear a face mask when you can’t socially distance. There is nobody more Patriotic than me, your favorite President!” The next day, Trump restarted the White House briefings about the coronavirus and somberly declared, “it will probably, unfortunately, get worse before it gets better. Something I don’t like saying about things, but that’s the way it is.” Days later, he canceled the Republican National Convention that had been hastily rescheduled and moved to Jacksonville, conceding, “The timing for this event is not right. It’s just not right with what’s happened recently — the flare up in Florida — to have a big convention. It’s not the right time.”

Few longtime observers of Trump expect the 74-year-old to change much, but this was surprising and in the eyes of many public health experts, welcome. Americans who didn’t want to wear masks could always point to the president’s refusal to wear one, even when touring hospitals, factories, or other open facilities. (Almost everyone who comes in contact with the president is tested beforehand, at least within the White House.) A large gathering of people indoors — including quite a few elderly — at a GOP convention in Jacksonville had the potential to be a public-health disaster. (Democrats will attempt a “virtual convention” in Milwaukee later this month, and no one is sure how that will turn out. It could be a boring flop.)

And while optimism has its uses in a crisis, Trump’s public comments about the coronavirus pandemic often veered into naïve denial of the severity and scope of the problem.

But if three and a half years of this presidency have taught us anything, it’s that there is no “New Trump” behind some curtain, waiting to be revealed. He is who he is, and he either cannot change, or is unwilling to change.

The coronavirus presented Trump with a problem that couldn’t be bullied, insulted, denied or obscured with bluster. The problem of a contagious and potentially deadly virus is complicated, with all kinds of lose-lose scenarios. The more you lock down in societies with quarantines, the more you pay a price in economic devastation and preexisting maladies that present health threats of their own: depression and psychological problems from isolation, drug abuse, alcoholism, domestic abuse, etc. Doing the right thing requires telling people things they don’t want to hear and banning activities that are commonplace in non-pandemic times. Everyone wants a simple, easy solution that doesn’t require much sacrifice, and Trump is not alone among leaders in hating — or fearing — telling his base of supporters things they don’t want to hear.

A leader could have the wisdom of Solomon and still make choices that anger, disappoint, and infuriate vast swaths of the public.

But Trump did attempt to spin the pandemic, and his casual attitude convinced a small but vocal minority of Americans that the threat is overhyped, that the virus is akin to the usual winter flu. He played along with the belief that the nefarious “deep state” is overhyping the threat to ensure Trump’s defeat in the presidential elections and empower Democratic governors with their draconian restrictions upon American life. He vaguely but ominously called upon citizens of Michigan, Minnesota and Virginia to “liberate” their states. The first round of daily briefings gradually included fewer and fewer appearances by Dr. Anthony Fauci and Deborah Birx, and more and more of the president arguing with reporters he disdained.

The presidency always required leaders to play a variety of roles. Many were in front of the television cameras — big speeches, town halls, televised interviews. President Barack Obama accelerated the trend of the president becoming a full-spectrum pop culture celebrity.

A significant part of the modern American presidency is indeed performative. But arguably the more consequential part of the job is what happened behind closed doors — think of John F. Kennedy meeting with his military advisors during the Cuban Missile Crisis. Presidencies stand or fall based on what a president concludes from briefings, sorts out through discussion and debate with his advisors, and what decisions he reaches. The presidency is a managerial position, and arguably the toughest in the world.

Shortly before “good Trump” appeared, the New York Times ran a long piece on divisions within the Republican Party about the president’s response, featuring a striking quote from David Carney, an adviser to Texas governor Greg Abbott. “The president got bored with it,” Carney said of the pandemic. (The country had a bad enough problem with voters who though the job of the president was to entertain them. Carney’s quote suggests we have a president who thinks the job is supposed to entertain him.)

As July ended, Trump reverted to his old habits. He retweeted videos featuring a doctor who had elsewhere warned about the health effects of sex with demons, and a Steve Bannon video with a guest declaring, “Dr. Fauci has misled the American public on many issues.” He continues to insist that the reason the United States is finding more and more cases is because the country is doing more testing. (That is a factor, but not the factor; the virus is spreading quickly in states that were largely spared in the spring.)

By July 30, Trump had dramatically reversed course again, suggesting, via Twitter, that the country “Delay the Election until people can properly, securely and safely vote???” (The president has no legal or Constitutional authority to do such a thing.) This prompted previously-reliable Trump supporters like Henry Olsen and Steven Calabresi to furiously denounce the president and his proposal, calling it “the single most anti-democratic statement any sitting president has ever made” and “fascistic and itself grounds for the president’s immediate impeachment again” respectively.

Any responsible advisor would have pointed out to Trump that an incumbent US president even suggesting a delayed election would spur a furious response. It is unlikely Trump consulted anyone before putting that proposal out into the world; an idea pops into his head and he expresses it.

The painful reality is that the virus will be a threat until there is a vaccine, which will probably not be until the end of this year or early next year. Masks and social distancing will be necessary and certain sectors of the economy will have a long, slow climb back to “normal”. But even still, Trump prefers happier fantasies – the virus will disappear one day, every decision he’s made has been correct, the rebound is just around the corner. He even prefers the happy fantasy of the election being put off until after the pandemic has passed and when the economy has recovered, improving his odds of winning another term.

“Good Trump,” with his responsible, clear-eyed assessment of the pandemic and what is needed to mitigate it, was destined to be replaced by “Bad Trump” with his happy talk and blind faith that the problem would go away soon. As the consummate showman, prone to optimism to the point of blind denial, Trump was just never that interested in the hard part of being president.