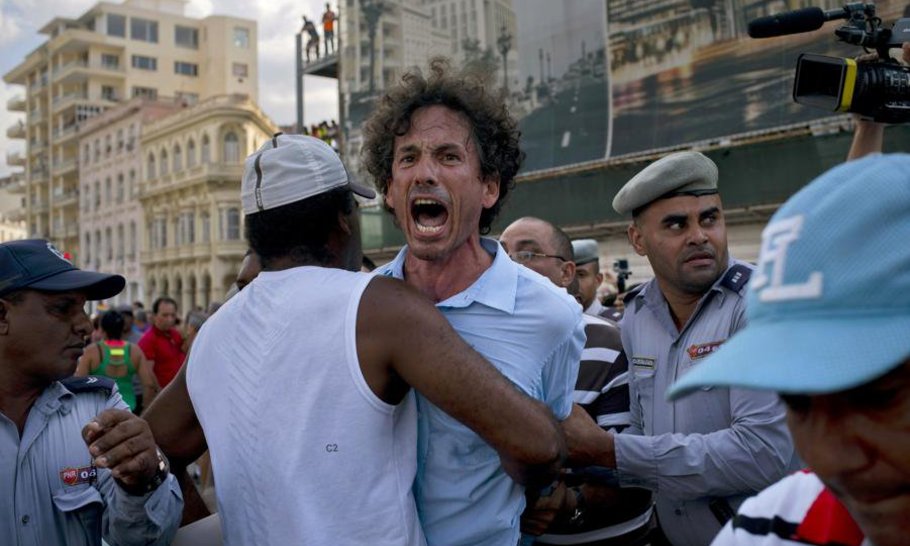 Boris Gonzalez Arenas at a demonstration In Cuba.

The Cuban immigration authorities have prohibited me from leaving the country. They do not feel obliged to explain why, only that the prohibition is a matter of “public interest”. Since June, when this ban was first communicated to me at Havana airport, I have been prevented from travelling to eight countries, one of them Britain.

As provided for in the new Cuban Constitution approved in 2019, after I learned about this prohibition I asked the immigration authorities to send me the information that they hold on me and to explain what determines the “public interest” that prevents me from travelling.

When I did not receive an answer, I filed a lawsuit against the immigration officer. Among the Cuban population there is a common phrase that is used about the denunciation of the authorities made in the courts: “That is for pleasure.” If the official is a military officer, people will say only: “You are crazy.” Months after filing the lawsuit, there has been no reply. Only silence.

As I write this, my friend José Daniel Ferrer, leader of the Patriotic Union of Cuba (UNPACU), the country’s opposition party, has been missing for fifty days. The habeas corpus writ seeking his release from illegal detention was rejected and his wife has only been allowed to see him for a few minutes.

She reported that the opposition leader had lost a significant amount of weight and that he was so weakened, he could barely give her a hug. He told her that he shared a cell with a criminal who was armed with a knife and that he was allowed to keep this weapon by the consent of the prison authorities. This man was continuously threatening to kill him.

When José Daniel Ferrer went to show his wife the marks on his body, her visit was stopped by the prison authorities. Her husband was then dragged back to his cell. Activists and international organisations have asked the Cuban government about the fate of José Daniel Ferrer. The only answer has been silence.

Jeremy Corbyn has never hidden his admiration and appreciation for the Cuban dictatorship and its leaders. It raises the question — which Castroist values ​​does the Labour leader want to introduce in Britain?

Cuba’s recently-approved constitution not only reasserts the primacy of the single party system, but also approves the continuation of the police state that blocks freedom of expression for the citizenry and press. It also prevents the freedom of assembly and the freedom to join independent trade unions. For this reason, Cuba’s jails still hold significant numbers of political prisoners and the rule of law is still absent.

I am a victim of Cuba’s oppressive constitution — the excessive powers it grants to the government means I am still prevented from travelling to the UK. Corbyn was sent a letter by a parliamentary colleague which asked him to intercede with the Cuban Embassy to request that I should be allowed to travel. Corbyn neither replied to, nor acknowledged the letter.

It is not just my case that has been ignored. Corbyn, a long-standing member of the Cuba Solidarity Campaign, has been silent in the face of numerous human rights violations committed by the Cuban government he so vocally supports. It seems Corbyn does not need to become Prime Minister in order to demonstrate Castroist values. He’s made those clear enough already.