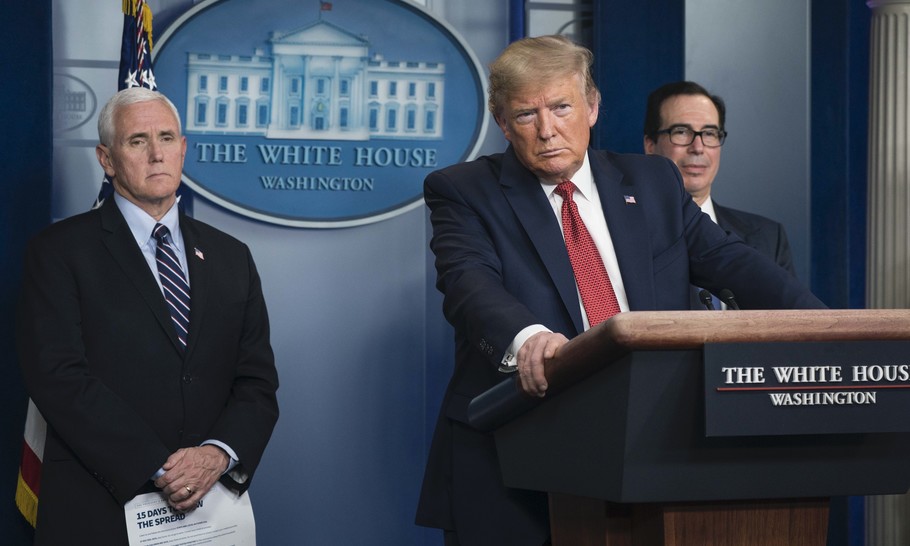 He may be 73 years old and the President of the United States, but Donald Trump has a tendency to be rather childish. He is boastful, simplistic and tends to be rude to his critics. Some find his style candid and entertaining; for others it is a source of dismay.

One feature of his juvenile temperament is that if a phrase causes particular offence, then his response is to repeat it constantly, just for the mischief and thrill of the indignation that results. It is like a child who discovers the power to shock by uttering a “rude word”.

For Trump, the latest instance of this delight in shocking his enemies is to refer to coronovirus as “Chinese flu”. The name of the virus might seem a rather trivial matter, as the death toll mounts and the world economy faces recession. Yet for the G7 — the intergovernmental group that consists of the US, the UK, Canada, France, Germany, Italy and Japan — it was enough to prevent agreement on a joint statement this week. The US was willing to settle on the “Wuhan virus” — after the capital of China’s Hubei province, where the outbreak began. But others wished to use the term “Covid-19”, which is favoured by the World Health Organisation.

From a pedantic point of view, it is technically accurate to refer to the “Chinese virus” — it does come from China, after all. Indeed the phrase is rather closer to the mark that the “Spanish flu”, as the influenza pandemic of a century ago is still known. That killed up to 50 million people around the world — but there is no evidence that Spain was the source or that the Spanish were infected more than others.

Yet it is still a mistake for Trump to use these insensitive descriptions — whether “Chinese virus”, “Chinese flu” or “Wuhan virus”. There been instances of Chinese Americans (and other Asian Americans) suffering racist abuse, prompted by the epidemic. They have been shouted and sworn at by people accusing them of spreading disease. Constant presidential references to “Chinese flu” do not exactly help.

Another objection is that Trump’s language confuses blaming the Chinese government with the Chinese people. During the Cold War, those wishing to see Communism defeated took care, if they were being sensible, to make the distinction between being “anti-Russian” and “anti-Soviet”. The more enlightened during the Second World War might even have managed to distinguish between the Germans and the Nazis.

The obverse applies. An appeal to patriotism is the last — and often the first — refuge of a totalitarian dictatorship. For any such regime, a tried and trusted excuse would be to say that its internal critics are in cahoots with foreign powers. The People’s Republic of China is no exception.

As Josh Rogin says in the Washington Post: “We must all be specific in blaming the Chinese Communist Party for its actions. It was the CCP that hid the virus outbreak for weeks, silencing doctors, jailing journalists and thwarting science — most notably by shutting down the Shanghai lab that publicly released the first coronavirus genome sequence. The Chinese people are heroes in this story. Chinese doctors, researchers and journalists risked their lives and even died fighting the virus and warning the world. The Chinese public’s community solidarity holds lessons for us as our own situation worsens. The Chinese are also victims of their own government’s draconian measures, which caused massive extra suffering.”

Some have made the case that when there is a crisis, such as an epidemic, dictatorships have advantages over democracies. It is obvious that those frightened of the authorities would have less inclination to flout the instructions they are given.

Rather heroically, the Economist has tried to produce some solid data and “analysed all recorded epidemics since 1960, from an outbreak of smallpox in Nepal in 1963 to more recent threats such as Zika and Ebola”. It concludes: “The results were highly dispersed but a distinct trend was apparent: for any given level of income, democracies appear to experience lower mortality rates for epidemic diseases than their non-democratic counterparts. In authoritarian countries with China’s level of income, for example, we found that past epidemics have killed about six people per one million population. In democracies with similar incomes, they have killed just four per one million.”

So whatever the plus points of living in a police state during a period of disease, the downsides — the secrecy, dishonesty, corruption, inefficiency and lack of innovation — are greater. You are more likely to catch whatever is going around and less likely to recover from it.

When it comes to pandemics there is an implication regarding foreign policy. It means the isolationists — the “America First” Trumpites in the US and their equivalents in other Western countries — have another challenge to their mindset.

They might conclude that the moral argument for promoting freedom and democracy around the world is unconvincing. Such intervention or “interference” should be avoided, especially if it risks a significant cost to their own people in blood or treasure. Should there be a military threat, that might attract more interest, but often the danger could be dismissed as remote. Yet when a virus can cross the globe so quickly and easily, threatening such vast human and economic cost, intervention should surely be worth consideration.

The lesson of coronavirus is that it doesn’t need a war for a dictatorship abroad to cause large number of people in our country to die. Defeating tyranny in the remotest corners of the globe could help to save lives in our own country.