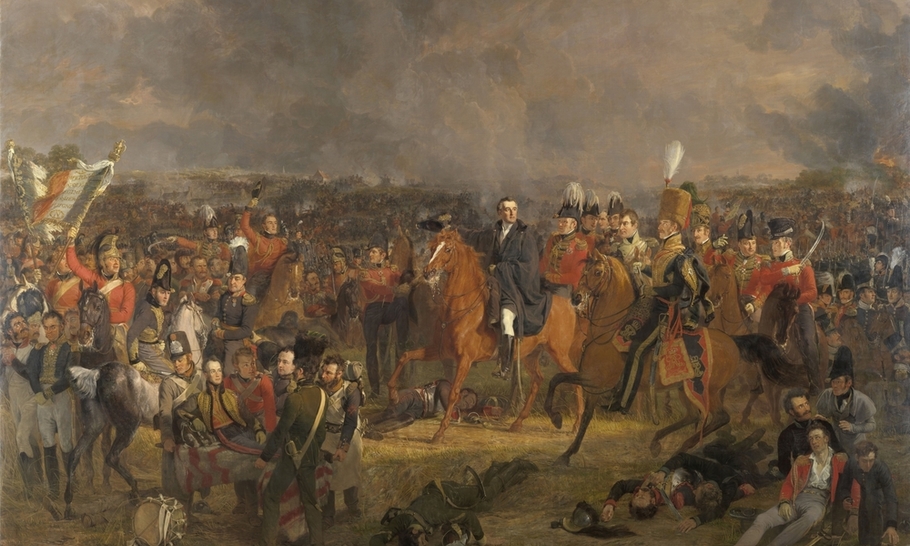 The Battle of Waterloo, by Jan Willem Pieneman, 1824 (Shutterstock)

It used to be so simple. National strategy in the modern era (post the French Revolution) was formed at the point where military power, diplomatic reach and economic muscle overlapped. Military power provided the decisive instrument on the battlefield, diplomatic reach tried first to avoid war and then to shape the alliances that would win it, and economic muscle underwrote the entire edifice by producing the weapons, feeding the people and creating the financial depth to prosecute war successfully. In the British case, this conjunction was further informed by a simple aphorism: never fight the main enemy in the main theatre of a major war.

Of all the wars we have fought since, the Napoleonic Wars still provide the strategic masterclass. British money kept successive continental coalitions in the field, which meant that it was the Austrians, Prussians and Russians that bore the human and material cost of wearing down French military power. We relied on insular geography and a powerful navy to secure the home base, and Nelson’s victory at Trafalgar did not change the terms of strategic engagement, it simply confirmed the existing ones and meant that France could never contemplate an invasion of England.

To show willing, we made a limited incursion into a subsidiary land theatre in Portugal and Spain. Later, Wellington managed to turn up at Waterloo with as many Dutch, Hanoverians and Frisians as British under his command in a battle where the Prussians made the decisive intervention. Finally, we accepted the laurels of victory at the Congress of Vienna and dictated a peace that kept us out of a land war in Europe for the following century. The core of successful strategy is doing the most with the least and what later became titled the ‘British Way’ in warfare was first defined in the early nineteenth century, along with its guiding principle of limited liability.

Exactly the same principles were applied in 1914 when the British Expeditionary Force deployed to secure the northern flank of the French army at the outset of the First World War. But once the commitment to the main theatre was made and the French Army became first exhausted and then mutinous, it was the British Army that took up the fight against Germany.

The 1 July 1916 (the start of the Battle of the Somme) to 11 November 1918 (the Armistice) marks the only time in the modern era when we have fought the main enemy in the main theatre of a major war and we still bear the scars. This Great Strategic Aberration left a legacy that dominated British conduct in the Second World War where our singular achievement was to avoid defeat rather than win a victory. German and Japanese forces were eviscerated by others in the Russian and Pacific theatres, while we became the junior partner in the invasion of mainland Europe after D-Day: normal strategic service had been restored.

It was then maintained in the Cold War, where we tucked in behind the US security guarantee provided through its leadership of the NATO alliance. But then everything changed with 9/11 and the second Great Strategic Aberration, where we moved away from the classical tradition of using war as a means of resolving the balance of power between states and began using it as an instrument to address the balance of power within states.

However, the interventions in Afghanistan and Iraq did not go well and we are unlikely to follow their example any time soon. At the same time, the geopolitics of the 21st century is returning us to great power confrontation, and, while terrorism will not go away, it will not dominate future strategic calculus: something resembling normal strategic service is still out there.

So that’s how we got here, but where do we go now? The National Security Capability Review, published last year, will not have detained the casual reader and was mostly read by consenting adults in private — which is a shame because it drove a coach and horses through the three-cornered military, diplomatic and economic structure of national strategy.

The review doffs its cap in the direction of modernising the armed forces, but implies a co-equality between military, cyber and information capabilities in recognition of the indivisibility of the physical and virtual realms in the era of fake news. It also goes on to identify organised crime, terrorism, mass migration and natural catastrophe as threats that sit alongside inter-state warfare and for which policy provision must be made. It then makes clear that only by co-ordinating all instruments of national power available to government, plus those uniquely available within civil society, can the full scale of future threats be addressed with any confidence. The entire process will be overseen by the National Security Council and goes under the catchy title of The Fusion Doctrine.

To some extent, this is back to strategic basics. We did not out-fight Germany twice in the 20th century but we did make better use of intelligence, our industries were more productive and, above all, we made better alliances. Alternatively stated, we mobilised the whole apparatus of the state and civil society in pursuit of a strategic aim. But those were wars of national survival against defined state entities with political doctrines inimical to our national values — the fight was hard but the concept was easy.

The challenge for Fusion Doctrine will be to achieve an equivalent effect in the ambivalent and insidious conditions in which we live now, where it simply doesn’t feel like we are at war, and cyber attack, human trafficking or endemic drug use can neither be attributed to a state actor nor brought to a conclusive end. Seen in these terms, government seems to have made a genuine attempt to bring national strategic calculation into the 21st century, but left itself with the Sisyphean task of implementing a doctrine which, in its current form, is no more than an exhortation to good behaviour.

Of the three dimensions of traditional national strategy, the role of economic muscle is fundamentally unchanged and remains the pre-condition for strategic success; the roles of military power and diplomatic reach, however, are much less clear. The military is confused by Fusion Doctrine. Having been at the pointy end of national strategy on battlefields dominated by kinetic force for so long, military officers are struggling with the idea that digital or cognitive battlefields can now receive equivalent billing.

In this world, the Chief of the Defence Staff might need to get used to the fact that he or she may have less to offer than the CEO of Facebook or that organised crime could deploy as much combat power as a small nation. At the same time the military cannot spread itself too thin; while making a contribution to these new challenges it must retain the ability to do what only it can do through the monopoly it holds on state-owned organised violence.

Military force will still be required, and, at the top end of the register, a link between conventional and nuclear force retained, if the concept of deterrence is to continue to function. All this represents a cultural and intellectual adjustment of historic proportions and for which 300 years of regimental history may not be the best preparation.

If the military arm of strategy is confused, the diplomatic arm is reduced. The Foreign Office has always been its own best publicist, flattering itself that the conveyor belt of fine Oxbridge-trained minds would always continue the Rolls Royce service for which it was internationally renowned.

That may have once been true, but the outsourcing of the development budget to Department for International Development, the transfer of the great issue of the day to the Department for Exiting the European Union and the creation of the Department for International Trade to run our global business affairs has left a vestigial rump in Whitehall, with little institutional confidence, and the ability to run what amounts to a Ford Focus service. Global Britain may restore some of the lustre, but it’s going to take a while.

National strategy is the province of the policy wonk rather than the generalist, but beyond the public gaze, seismic changes are taking place in the way in which we define our place in the world. Government is to be congratulated in recognising that traditional methods are no longer adequate to respond to a Hobbesian world of staggeringly greater complexity than our history has prepared us for. Recognising the problem is one thing, addressing it another and that remains very much a work in progress. Pretty soon, we may no longer know what normal strategic service is.