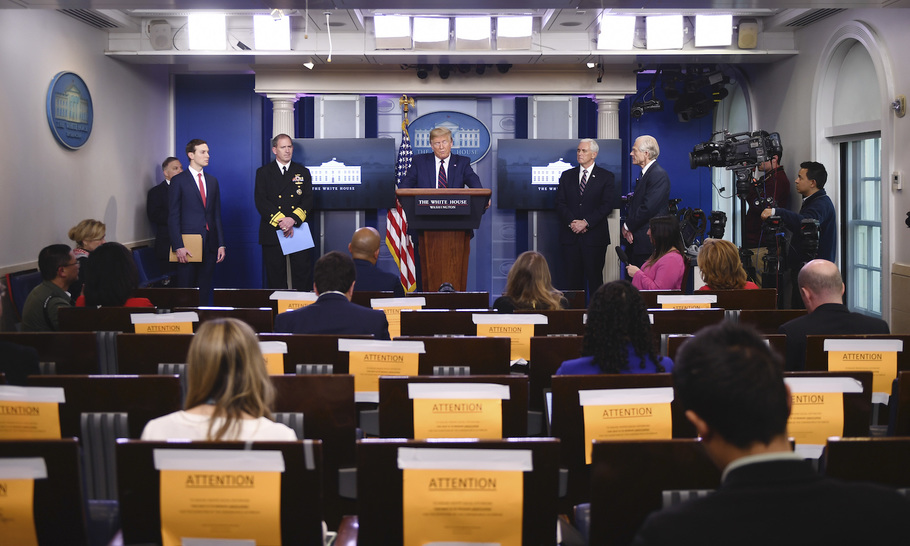 The United States famously reminds us, via its national anthem, that it is “the land of the free and the home of the brave”. For good or ill it is regarded as the swashbuckling, pulsating hub of international capitalism.

Yet the truth is more nuanced. It turns out that Uncle Sam is rather fond of red tape — while for years there have been plenty of lawyers and special interest lobbyists who have found all the resulting complexity rather lucrative. It is to Donald Trump’s credit that his administration has made some modest effort to hack away at some of it.

The coronovirus emergency has prompted an unprecedented increase in state intervention around the world, including in the US. People are accepting restrictions on their liberty that would not usually be imagined in peacetime. Yet the pressure has also prompted some restrictions to be lifted.

Mike Pence, the US Vice President, has said that the Department of Health and Human Services is issuing a regulation “to allow all doctors and medical professionals to practice across state lines to meet the needs of hospitals that may arise in adjoining areas.”

What? Is it not extraordinary that such a prohibition was ever in place? Imagine a doctor in Hampshire being told he was banned from practising in Wiltshire. Quite extraordinary.

By contrast, there are other restrictions we have that might leave the Americans feeling justifiably surprised. Mark Littlewood, the director-general of the Institute of Economic Affairs says: “Bafflingly, only six of the EU27 countries allow patients to order prescription medicines online. Surely we can expect to see that restriction lifted?”

However, these are relatively footling points compared to the obstacles of bringing in new tests and medicines.

The fundamental need for caution still applies. Primum nil nocere: first do no harm, is part of the Hippocratic Oath, the code of medical ethics attributed to the Greek physician Hippocrates who lived from 460–370 BC. It remains valid.

This means that a sense of proportion is needed: there must be a reasonable balance between allowing innovation and ensuring that safeguards are robust. The concern is that in recent years the system has become imbalanced and that some of the costs and delays have been pointless.

One mild piece of liberalisation in the United States has been the “right to try”. This gives patients who are terminally ill the right to take experimental drugs and other therapies that have passed preliminary tests but have not yet been approved by the US Food and Drug Administration.

Another way of minimising delay would be for one nation to give at least some regard to tests carried out in another. The progress with coronavirus testing has varied widely. In the United States, the Centers for Disease Control and Prevention waited to produce its own test — it refused even temporarily to use the test approved by the World Health Organisation, which was being used in nearly 60 countries.

Amidst the 24 hour news cycle it is prudent, as Kipling urged us, to treat the more emphatic claims of triumph and disaster as imposters, at least initially. We read that Hydroxychloroquine, a drug normally used to treat malaria, has been used in France with potential success as a treatment for the coronavirus. We then read that other experts are dismissive of the chances.

Another encouraging piece of news came from Peter Thielen, a molecular geneticist at Johns Hopkins University, who said that when a vaccine is developed that the “mutation rate of the virus” means that “a single vaccine, rather than a new vaccine every year, like the flu vaccine” should be enough. Let’s hope so.

We also hear that we will be able to conduct coronavirus antibody tests at home “within a matter of days”, with finger-prick kits that will be available from Amazon and Boots. We then hear that it might be a week or two.

What gives me hope amidst this blizzard of innovation, so utterly incomprehensible to me, is the law of averages. Some of these scientists — for all their brilliance and dedication — will fail. Yet sooner or later, one way or another, progress will be made. A “breakthrough” or “game changer” will prove real rather than illusory. Will rules lifted to help defeat the coronavirus even be re-imposed?

The emergency has brought to mind the need for rigour. Of course, that means ensuring that the assorted tests, treatments and vaccines work. But it also means avoiding the loss of precious lives through avoidable or unreasonable delay.