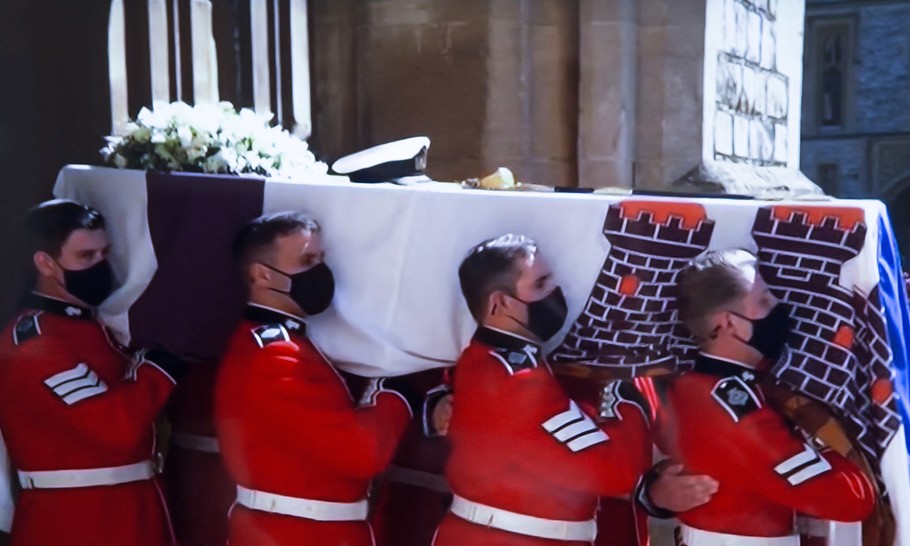 For 68 years, since the Coronation, Philip, the proud naval officer Prince (Mentioned in Despatches after the Battle of Cape Matapan), had walked – metaphorically and often literally – one step behind his beloved Queen on public occasions. Theirs was a love match and all credit to her parents for permitting it, ignoring the carping from fossilised old courtiers. But protocol is protocol.

It grated on Philip at times. God knows it grated in the early years. However, it was his duty. Although a moderniser, who eventually forced those old fossils to abandon some of their more outdated procedures, the Prince was above all a stickler for service. Wherever Elizabeth was, she was centre stage and his role was as the ever-supportive leading man. And that was that. “Get on with it” – to use one of his favourite phrases.

This day it was different. In the glorious Spring sunshine, in the grounds of the castle they loved, it was finally, after 99 years, Philip’s day. It was his funeral and, over the years, he orchestrated every moment it with care – although Covid fine-tuned it. And it was his decision to invite three of his sometimes controversial royal relations from Germany, Denmark and Greece to process with the closest members of his British family behind his mortal remains. We sometimes forget that Philip arrived in this country as a penniless foreign refugee. Even so, he was no commoner but was born sixth in line to the throne of Greece, and could also have claimed a high place at the Danish Court. He became British because he wanted to be British. But he would not reject his European relatives and background.

That procession was led, as he had stipulated, by the spare, surprisingly beautiful, and now famous, military green Land Rover hearse. The one he had converted to his own design. Of course, the Queen did not walk. She arrived in the State Bentley, at the end of the parade. But that Bentley was an indication of her age and vulnerability. Not a signal of status.

And it was her decision to sit alone, socially distanced, and Covid-masked, in the chapel. It is said that she wanted to signal that she was obeying Covid rules to the letter, and also to show that she shared the pain of the many other widows who have had to grieve alone because of the pandemic. Certainly it would have taken ten minutes or less for her senior staff to come up with some fancy formula which would have allowed her to sit with a relative or companion. Look at the nifty way they found to keep Harry and William apart. Their cousin Peter Phillips was inserted between them. But it was the Queen’s decision to pre-empt an unseemly squabble over who should wear military uniform, by decreeing that nobody should. Perhaps Her Majesty was tempted to repeat Philip’s advice: “Get on with it.”

In his sometimes brusque way, Prince Philip once commented that, after his death. the Palace should: “Just stick me in the back of a Land Rover and drive me to Windsor”. And so it came to pass. Except that the scale, the colour, the beauty and the grandeur of that event, even in its scaled down, Covid-compliant form, was staggering. And the fact that the military men (I could see no women, but I may be wrong), 734 in number, were spread out in formal socially-distanced pattern did not diminish the occasion. It added to its sheer, stark beauty. The occasion stuck rigidly to the Covid rules and regulations. It honoured Philip’s injunction. And it still provided a right royal send off.

So what are we left with? Well, I was struck by the massive embankment of flowers and scribbled notes left over the week outside the castle walls by ordinary people. Almost on the scale of the tributes to Diana. Remember this was at Windsor and not in central London. And the authorities had – for Covid reasons – done all in their power to persuade people not to gather to pay tribute. So the Prince must have struck a popular chord. In truth, I suspect that most people loved him for his indiscreet cracks, his so-called gaffes, which allowed the media to tut-tut hypocritically while most of the country chuckled indulgently. There was no cruelty and certainly no racism in the man, and the public sensed it.

Also, I suspect people increasingly came to honour his interest in both wildlife and modernisation, his preoccupation with industry and technology, and his desire to generate opportunities for youngsters of all classes. As the years roll on, history will surely put him up there with the great Prince Albert. And you can’t say much better than that.