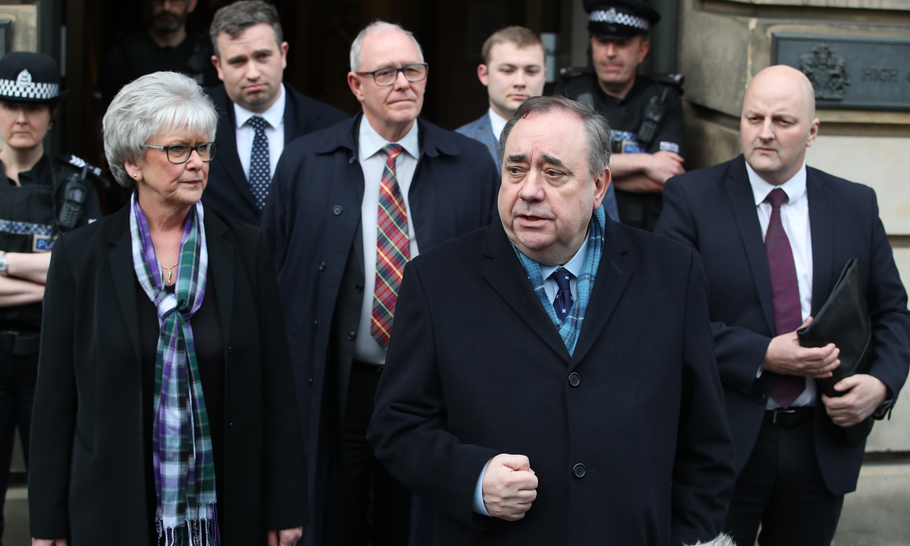 Alex Salmond after he was cleared of attempted rape and a series of sexual assaults. (PA Images)

The acquittal of Alex Salmond after two years, during which he faced accusations of serious sexual assault, is the most important court judgement affecting contemporary British politics in decades.

Normally when prosecutors in England or Scotland put a high profile politician on trial, they are confident of securing a verdict that relies as much on a generalised public and judicial hostility to the political class than on strict evidential rules.

Salmond hired Gordon Jackson QC as his chief defender. Between 1999 and 2007, Jackson, 71, was a Labour Member of the Scottish Parliament, until he lost his Govan seat to none other than Nicola Sturgeon.

The Salmond-Sturgeon tension is well reported. It was made worse when Salmond took his successor as First Minister to court over how the Scottish civil service handled the internal government investigation into the accusations against him. Salmond won that case. The SNP MP, Joanna Cherry, also a QC, warned that Salmond would be acquitted although this was pooh-poohed by the Scottish media establishment who had decided the Salmond era was over.

Salmond, Cherry, and the many in the SNP who preferred his gladiatorial style of leadership to Sturgeon’s more cautious approach will now feel they have won a famous victory. The predictions by the London political establishment and the Tory loyal press that the Salmond trial would weaken the SNP and leave Boris Johnson, after his crushing of Labour in December, as the undisputed master of all the United Kingdom will now have to be revised.

Johnson has postponed the Mayoral elections for London, Birmingham, Manchester and other big cities to 2021. They will now coincide with the elections to the Scottish Parliament in Holyrood next May and deliver a verdict on the first 18 months of the Johnson administration including his handling of the coronavirus crisis.

But in Scotland, the SNP will unite, now that their King over the Water is back in the fold. They will fight the election as a referendum on whether Scotland should stay connected in some form or another with Europe.

There is considerable resentment in Scotland at what they see as southern English Tory votes depriving Scots of their right to stay linked to Europe. It is made worse by the sense that it is a very elite group of English public schoolboys, Johnson and other old Etonians, or Rishi Sunak, the former Head Boy of Winchester, who are deciding Scotland’s fate over the votes and wishes of the Scottish people.

On the assumption that given the coronavirus crisis lasts into the summer, the view from most observers is that No. 10 will have to ask for an extension to the Brexit negotiations. The two chief negotiators, Michel Barnier for Europe and David Frost for Britain, have been struck down by Covid-19. Even if they are soon back on their feet, there is no realistic chance of serious negotiations being sustained in the months of lock-down and travel restrictions that lie ahead.

As Mujiba Rahman of Eurasia reports, there is an acceptance in both Brussels and London that coronavirus requires an extension. The only question is when Johnson can go for this with minimal loss of face and with the fewest possible objections from Tory die-hards.

So Brexit will be a live issue into the first half of 2021 coinciding with the Holyrood elections. The SNP does not have to fight on a platform of IndyRef 2 — a new separatist referendum — but simply to ask for endorsement of the view that Scotland should not be cut off from Europe by southern English Tories.

It will be hard for Labour or the Lib Dems to get back into the game, which suggests that the SNP is likely to win a clear majority and a large majority of Holyrood seats. Labour has always depended on a big contingent of seats from Scotland to form a government. But the next Labour leader can neither endorse Scottish separatism nor back Johnson in insisting Scotland must do what English Tories say.

Far from being diminished by the Salmond trial, the Europe question will dominate politics north and south of the border for the next 18 months.