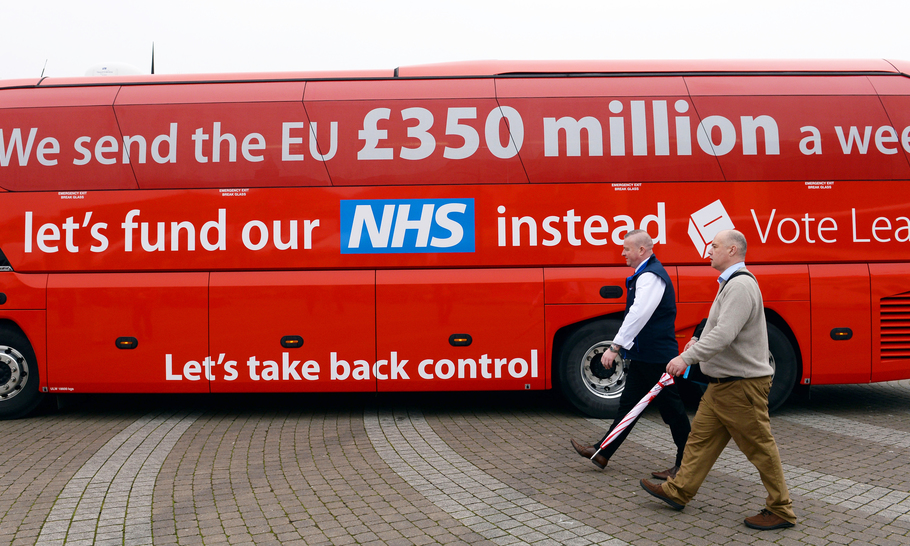 The exchanges in TheArticle between Robert Tombs and George Magnus provide an opportunity to set straight the fraught issue of the potential economic impact of Brexit. Professor Tombs, a highly respected historian, argued initially in the Financial Times that Project Fear “talked up disaster flamboyantly”. There may perhaps be some short-term disturbance, he said, but Brexit is economically rational mainly because our trade with the Eurozone is slow growing. The Single Market, he added, gives us little help and EU regulations may be harming our external trade.

George Magnus, a hugely experienced bank economist and China-expert, countered firstly by saying that that falsity was far more apparent on the Leave side of the Brexit debate. This was mainly a reference to the claim on the side of the Brexit bus that the UK fiscal contribution to the EU was £350 million a week.

He accepted that Treasury and Bank of England forecasts of Brexit were based on “some unrealistic assumptions” but claimed that the overall thrust of how the economy has performed “has been broadly right”. The important forecasts he implied, were for the period still to come. The Single Market greatly helps UK exporters, he asserted, even in services and no economist believes that it can be rational to leave a large trade bloc especially in these uncertain times.

How do we assess these arguments? Let’s deal first with the words on the bus. The Vote Leave claim that the UK contributes £350 million a week to the EU referred accurately to the gross contribution. Of this, around £80 million a week is rebated to the UK although only after a delay of a year. A further £65 million of the £350 million total is spent in the UK mainly via the Common Agricultural Policy and Regional Funds. Whether this spending in the UK should be counted is arguable, but it is the EU rather than UK which decides on how the money should be spent. If we regard the “correct” figure as the net contribution of £205 million a week, the exaggeration on the bus is £145 million or a third of one per cent of GDP. As we will see below, the deceptions on the Remain side were arguably much larger than this.

The Treasury prediction in its short-term report of 2016 was that a ‘no’ vote in the referendum would result in four quarters of recession and a rise in unemployment of between 500,000 and 800,000. In fact, real GDP grew at an annual rate of two per cent in the second half of 2016 and just under two per cent in the following year. It then grew at 1.4 per cent in 2018 and a bit less in 2019. The difference between this observed growth and outright recession is thus at least two per cent of GDP for a single year, dwarfing anything written on the bus. Moreover, unemployment has fallen by a third of a million since the referendum. Tombs’ claim of flamboyant exaggeration sounds about right.

The claim by Magnus that the overall thrust of the Treasury prediction on how the economy has performed “is broadly right”, sounds ridiculous in this light. However, he may be referring to the widely quoted view of several economists that GDP is currently three per cent below what it would have been had the UK continued to grow in line with its main comparator economies. It is true that UK growth has fallen behind that of other G7 economies a little since 2016, but it is facile to simply ascribe this to Brexit. The UK has a different cycle to the other economies and had reached a peak in 2016. A slowdown relative to other G7 economies was thus on the cards irrespective of Brexit. The main factor has been the boost given to the US economy by Donald Trump’s fiscal expansion.

Magnus suggests that the accuracy of the Treasury’s long-term forecasts (to 2030) made in 2016 are as yet unknown and hence may be accurate. However, detailed analysis published as working papers on the website of Cambridge University’s Centre for Business Research by myself and colleagues, showed the Treasury made egregious errors which would inflate their estimate of the impact of a no deal Brexit by 400 per cent. The Treasury estimate of a seven per cent hit to GDP by 2030 could thus be exaggerated by perhaps five per cent of GDP, again hugely greater than the words on the bus.

Most economists, other than the Economists for Free Trade group and ourselves, have adopted a pessimistic outlook when considering Brexit and George Magnus appears to fit this pattern. One other example (repeated recently by the economics editor of the Sunday Times) is the claim that EU membership since 1973 has greatly helped the UK economy. Before the UK joined the EEC its economic growth lagged behind the then EEC. After joining, the UK grew at least as fast as the other members. What such claims rarely say is that the actual growth rate of the UK economy did not improve after joining. Its relative performance looked better because growth in the other EEC economies halved after 1973 (probably because by this date they had closed their productivity gap with the US).

Tombs’ view that there is little to lose economically from Brexit, should be seen in this context. Magnus may be right to stress that these are uncertain economic times, but he is not correct to say that no economist believes it to be rational to leave a large trade bloc. The evidence base is cloudy to say the least. What is clear is that the Treasury has been no help at all in guiding us on these weighty matters.