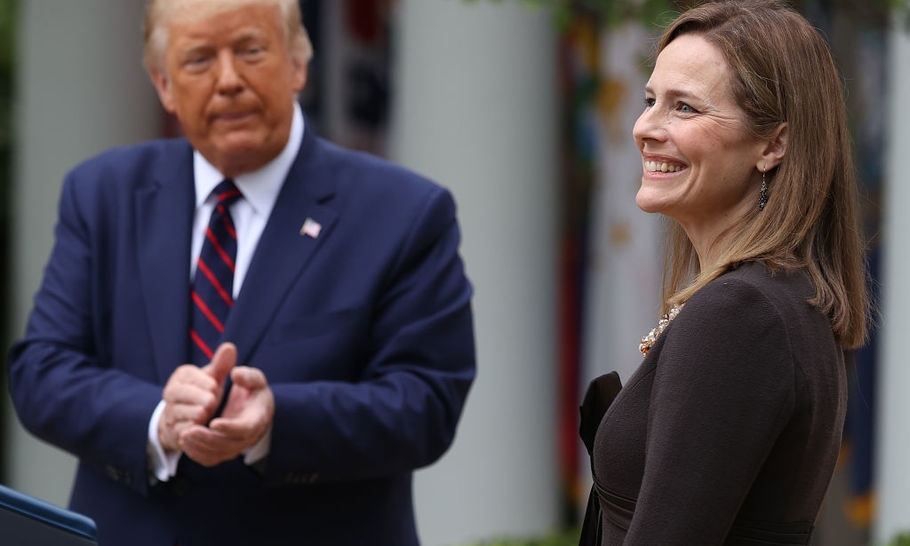 This vote on a new US Supreme Court nominee is an outrage. If we can’t stop the elevation of Amy Coney Barrett, a conservative judge, to the nations highest legal body, then it’s all the more important for Democrats — and democrats — to raise Cain about it.

Justice Antonin Scalia’s death in February 2016 left a vacancy on the Supreme Court that President Obama tried to fill by nominating Merrick Garland. At the time, Mitch McConnell, the Senate Majority Leader, objected to a “lame duck” President making such a nomination during an election year, and the Senate Judiciary Committee’s Republican majority refused to conduct the hearings. This was the first time since the Civil War that a nominee was not given consideration for an open seat on the Court.

At the time of Garland’s nomination, McConnell spoke these words: “It is today the American people, rather than a lame-duck president whose priorities and policies they just rejected in the most recent national election, who should be afforded the opportunity to replace Justice Scalia… The Senate will appropriately revisit the matter after the American people finish making in November the decision they’ve already started making today.”

McConnell made these comments a full nine months before election day. Other Republicans were even more categorical. Lindsey Graham, in an on-the-air interview in 2016, supported postponing filling Scalia’s seat until after the election, and went so far as to say this: “I want you to use my words against me. If there’s a Republican president in 2016 and a vacancy occurs in the last year of the first term, you can say Lindsey Graham said, ‘Let’s let the next president, whoever it might be, make that nomination.’”

The comments of both these erstwhile gentlemen are currently being used against them in their reelection campaigns, as they should be. The level of hypocrisy demonstrated by the Republican Party is beyond belief.

Given the precedent-setting move by the Republican Senate in 2016, it doesn’t make sense that we are pushing forward, within mere weeks of the next presidential election, a nominee to fill Justice Ruth Ginsberg Bader’s vacancy on the Court. Who is holding these people’s feet to the fire for their earlier position on this issue?

The Democrats might have shunned the entire nomination process. But taking the “high road”, as was once so nobly recommended by Michele Obama, won’t work in this broken-down system. Indeed, the image of the Democratic Senator Diane Feinstein embracing the Republican Senator Graham at the end of Barrett’s hearing process will live in infamy. In that one photo op, the maskless Senator Feinstein threw her party, and the sanity of the process, under the bus.

Why, in fact, did Democrats participate in this hearing at all? And why should they participate in the vote, which even by McConnell’s lights in 2016 is an illegitimate act in a democracy? To be sure, Obama’s admonition to go high should remain a watchword for Democrats, but the full-on lies of McConnell and Graham in 2016 about how the Supreme Court nomination process have left us without moral compass.

Many Americans are filled with a sense of moral outrage at what they see. We try to hold people accountable. At this point, only the electorate seems capable of accomplishing this goal. The nomination of Amy Coney Barrett is one more nail in the coffin of democracy.

We have lost Justice Ruth Bader Ginsberg, only to see her replaced by her polar opposite. After having had multiple promises from elected officials that no nominations were to be made during this period, would Republicans have let this go if a Democratic President had nominated someone to the bench?

If the Republicans hadn’t been so intent on hurrying an ultra-conservative into the Supreme Court, perhaps we could have all taken a step back as a country, taken a deep breath, and learned who our newly elected President would nominate to this most important, life-long position.

Why are the Democrats allowing this to happen? Where is the anger? Where is the fight? Are we really going to remain the party of “politeness” and ignore what’s being taken from us? Now is the time to raise Cain, not hug a liar.