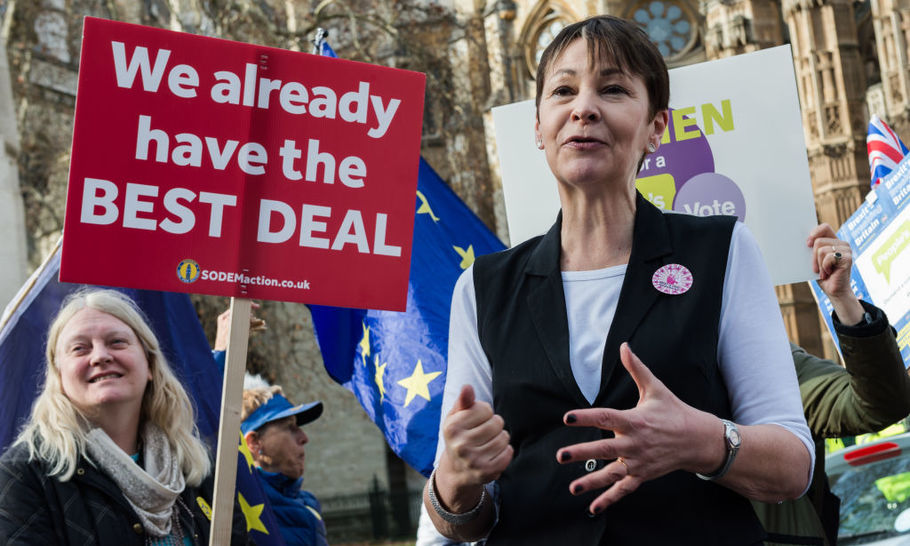 Rather than seeking to persuade Brexiteers, the pro-Remain parties standing in the Euro elections are competing with each other simply to be the most emphatic in insisting that the EU referendum result should be disregarded. The Lib Dems are resorting to vulgarity to achieve emphasis – adopting the slogan “Bollocks to Brexit”.

Then we have what started as the Independent Group (though opposing independence for the UK). It went on to become Change UK (though opposing change in our membership of the EU). Then for a while it styled itself the Remain Alliance (though refusing to enter into alliance with other Remainers). Not to be outdone, the Green Party also favours a second referendum. Just to be on the safe side, Caroline Lucas, the Party’s only MP, says that it would be “so irresponsible for any government to actually leave with no-deal” that that option should not be on the ballot paper. She suggests that the choice should be between Remain and Theresa May’s deal – which one of Guy Verhofstadt’s staff boasts would mean the UK becoming a “colony” of the EU.

This doesn’t seem a very democratic approach. Nor a patriotic one. Green Party members might shrug off such charges. What is more startling is why those who supposedly wish priority to be given to the environment should be such enthusiasts for the European Union.

The EU spends over £3 billion a year on subsidies for fossil fuel production. Anyone concerned about climate change should back a proper Brexit urgently – to stop our money being spent this way. Furthermore, Brexit will allow us to bring in green tax cuts. The Conservative MP, John Redwood, proposes that we “remove VAT on all green products once we are out of the EU and allowed to do so, as I want better draught excluders, insulation materials and control systems to be cheaper and more accessible.”

Few aspects of the European Union have been more disastrous for the environment than the Common Fisheries Policy. This is the scheme that caused a quarter of the fish caught being thrown back dead into the water – a waste of a million tons of fish a year worth around £1.6 billion. The rules have been changed now so that sometimes fishermen are required to land with all their catch – but then be required to send much of it to landfill to rot.

The CFP’s terrible twin, the Common Agricultural Policy, is scarcely better. Its subsidies have encouraged the ripping out hedgerows, the draining of Wetlands and the ploughing over of meadows. The use of chemical fertilisers has been funded to promote intensive farming. There has been a dramatic reduction in bird populations. The number of linnets, turtle doves, and lapwings has plummeted after so much of their habitat has been destroyed. Hedgehogs have suffered as well – as have the butterflies and moths.

Baroness Jones, a Green Party peer, has stated: “The EU is a congenital undemocracy built for big business and secretive lobbying to thrive in and built to resist the scrutiny of a genuine public. It
is an outsized behemoth that simply doesn’t fit with the Green vision of a future lived on a more human scale.” She was in a minority in her Party in voting Leave.

The Conservative writer, Roger Scruton, offered a similar perspective in his book Green Philosophy: “The European Union, with its 180,000 pages of regulations, many of them absurd but most of them useful to lobbyists, illustrates the process. In a normal legislature, lobbying is often an object of suspicion to the ordinary voter. Not so the lobbying in Brussels. For lobbying is the only outside pressure that the bureaucrats feel: there is no popular sentiment or electoral process that might impede its impact.”

One example of the consequences was the EU adopting standards that promoted diesel engines. While the Americans and Japanese promoted hybrid and electric cars, the EU adopted emissions standards that focused on carbon dioxide (CO2) instead of nitrogen oxide. Volkswagen and European car manufacturers had been lobbying hard for this to boost the diesel market. The change was dramatic. Diesel cars went from less than 10 per cent of the UK market in 1995 to more than half in 2012; the rest of the EU saw a similar trend. Dan Hannan, the Conservative Euro MP,  concludes: “In short, the EU was lobbied by a vested interest and adopted rules that increased air pollution and led to the needless deaths of thousands of European citizens.”

As well as causing environmental damage, the EU also often prohibits opportunities for improvements. George Eustace reflecting on his experience as an Environment Minister says: “Rather than thinking through from first principles what would really deliver for our environment, the all-pervasive nature of EU law means that our civil servants spend all their time fretting about whether we are obeying this or that EU regulation. It is very damaging and means that we stop thinking creatively about the fundamental issues. Instead, the lawyers take over. It is a deeply unsatisfactory way to tackle the complex challenges of our natural environment.”

Taken together, the EU must be regarded as an ecological disaster. The examples I have given have not come by chance. It is inherent in the EU’s nature that it lacks accountability. For the Green Party to be seeking a role as the EU’s greatest cheerleaders, is a bitter irony.