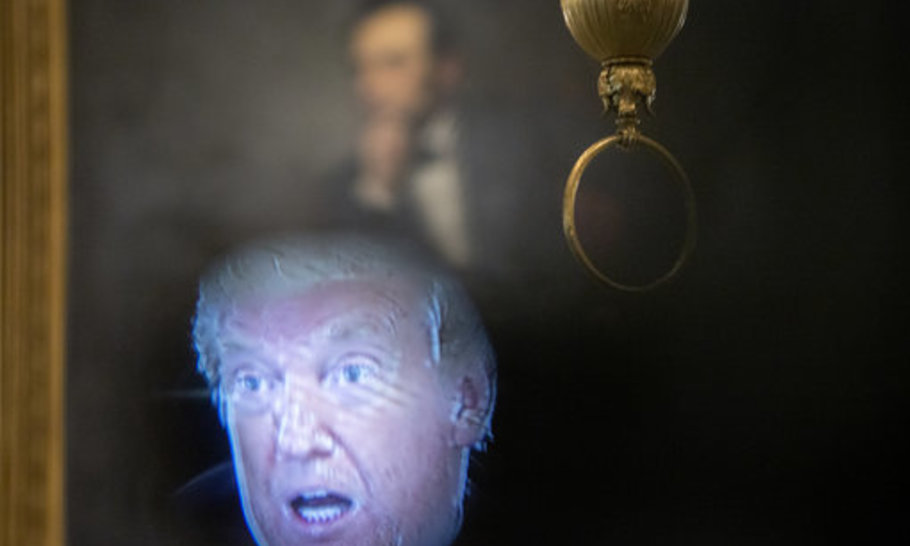 Those who find Donald Trump to be full-spectrum abhorrent — obnoxious, crude, narcissistic, selfish, ill-informed when he’s not ignorant, xenophobic, an enthusiastic spectator of bigotry if not a full-time practitioner — have asked an insistent question since early in his presidency: when will his supporters finally see the obvious and abandon him?

For most of Trump’s remaining supporters, the answer is “never.” At least, never in the form of a public mea culpa, and not in the form of voting for another candidate.

But there are little glimmers that a fraction of Trump’s base is running out of patience when it comes to the president’s flaws. Trump’s head-to-head polling against Joe Biden has been weak lately, and his standing among seniors is also dropping. Senior citizens have the most to lose from a poor governmental response to the outbreak.

And there’s another reckoning with one of Trump’s weaknesses. Since the various quarantines and lockdowns started chafing at American’s patience and devastating their livelihoods, Trump fans have generally been more inclined to reopen society. A swathe of the president’s base has either concluded that a higher risk of spread is an acceptable risk to get the country out of its induced economic coma, or is sceptical that the coronavirus is as dangerous as health experts say. This view is intermittently supported by new information suggesting that the virus arrived in the United States earlier than previously thought, and that asymptomatic cases are more widespread than scientists believed. (The problem is that even under the most generous assumptions, getting to herd immunity is going to push the US death toll to a six-figure sum — maybe the high six figures. Possibly even seven figures.)

Trump’s dirty little secret is that he changes his mind frequently, often in response to the last person he spoke with and whoever he’s talking to at the moment. On April 17, apparently enraged by the decisions of several Democratic governors, Trump took to Twitter, calling upon his followers to “liberate” Michigan, Virginia, and Minnesota. From this, one could reasonably conclude Trump believed it was time to start loosening the quarantine restrictions. But when asked about Georgia governor Brian Kemp’s decision to open up his state on April 22, Trump declared, “I think it’s too soon,” and the following day he was even more contradictory: “I want them to open as soon as possible and I want the state to open. But I was not happy with Brian Kemp. I will tell you that.” Georgia Republicans fumed, and other GOP governors saw a clear lesson: even if you’re a Trump loyalist who appears to be enacting the president’s preferred policies, Trump may switch sides and join your critics with zero warning.

For a handful of usually-loyal Trump fans, the president’s on-and-off-and-on-again willingness to continue the lockdown shook their faith like few other decisions. The good news is that the news cycle always provides a flow of more comfortable arguments — the media is hypocritical, New York City Mayor Bill de Blasio is terrible, Michael Flynn and Roger Stone got railroaded by the justice system. But deep in their guts, some Trump fans begrudgingly realise that he’s botched some enormously consequential decisions about how to respond to the virus.

In the eyes of Trump critics, the president downplayed the threat of the coronavirus and dithered as it approached. In the eyes of a vocal contingent of Trump fans, the president bought into the hype of a overstated threat and unwittingly agreed to jeopardise his own reelection by assenting to the shutdown of the American economy – and he allowed the unnecessary shutdown to last far too long. And some in the middle think he’s brought about the worst of both worlds, ad that his erratic, ad-hoc reactive decision-making designed to win the news cycle, has left Americans confronting the virus with no coherent plan.

Trump kept bragging about how high the television ratings for the briefings were, as if everyone was tuning in to see him, and not frightened for themselves or loved ones and hungry for information about when things could start moving “back to normal”. For any other president, perhaps any other statewide elected official in the United States, the daily White House briefings on coronavirus would be a slam-dunk way to increase public support. Just step up to the podium, offer some reassuring words, mention updated statistics about hospital capacity, and then turn the stage over to Dr. Anthony Fauci and Deborah Brix.

Instead, day by day, the White House briefings turned into Trump’s usual campaign rallies, but without the crowds. The president did minimal preparation and could barely hide his lack of interest in the actual information that he was meant to impart. He much preferred to brag, boast, and fight with reporters. Aides and allies tried to get Trump to stop doing the briefings or accept a smaller and more disciplined role, to no avail. Trump’s inability to be anything beyond who he always is came to a head when Trump blurted out, “I see the disinfectant that knocks it out in a minute, one minute. And is there a way we can do something like that by injection inside or almost a cleaning? As you see, it gets in the lungs, it does a tremendous number on the lungs, so it would be interesting to check that.” Health authorities offered frantic warnings that Americans should not be injecting, ingesting or inhaling disinfectants.

Trump is now reportedly enraged at his campaign staff for their inability to save him from his own worst instincts.

Trump could well be caught in a terrible pincer attack as November approaches. The white-collar suburbanites and soccer moms who left the GOP during Trump’s rise and swung many of the 2018 midterm contests now find him to be a catastrophically unqualified leader. Most of that demographic will be voting for Democrats until the Trump era ends. Meanwhile, the blue-collar whites in the upper Midwestern states who proved so decisive in 2016 might be less enthusiastic about Trump, now that the economy has collapsed on a scale comparable to the Great Depression. Even a small drop in Trump’s 2016 support could flip states from red to blue. Last cycle, Trump’s margin in Michigan, Wisconsin and Pennsylvania was less than one per cent, his margin in Florida was about one per cent, and his margin in North Carolina was about three per cent.

But there’s reason for a few nagging doubts before Trump’s political obituary is written. He was supposed to have no chance to win in 2016, either. Many Americans will remember that the economy was roaring before the coronavirus came over from China, a menace that no world leader managed to completely contain. And Trump was an outspoken critic of China long before it was cool, so to speak; Joe Biden has been, up until very recently, a fairly outspoken cheerleader for more US engagement with China: “they’re not bad folks, folks… They’re not competition for us.”

Perhaps more importantly, Joe Biden just doesn’t look good these days. Time off from the campaign trail was supposed to be restful and rejuvenating. The former vice president’s appearances via television from his basement in Delaware are confirming that what we saw is what we’re going to get — a kindly 77-year-old man whose mind is not as sharp as it used to be, whose statements tend to wander, and who looks like he should be enjoying his golden years, not prepping for four years in the world’s most stressful job.

If you mention Biden’s verbal stumbles, his defenders sometimes deploy disingenuous outrage that this is criticising his stutter. This is nonsense; we’ve all been watching Biden speak for decades. At his best, he was terrific — funny, backslapping amiability and plain-spoken directness. But the Biden of 2019 and 2020 just isn’t the same guy who debated Sarah Palin and Paul Ryan. Now Biden’s sentences begin, suddenly stop as he thinks of something else he wants to say, continue a bit, switch back to the first point, then veer towards a third, generating something of a tossed salad of sentence fragments. Biden’s age is not debilitating, but his communication skills are hindered.

If Democrats had a magic wand, they might have restarted the 2020 primary election and given a longer look at younger, haler and heartier options like Cory Booker, Kamala Harris, or Amy Klobuchar. And perhaps a subtext of the Biden campaign this fall will be, “don’t worry, the vice-presidential nominee will be taking over shortly.” But that’s not the ideal message against any incumbent president, even one as flawed as Trump.

Covid-19 Joe Biden The US Trump