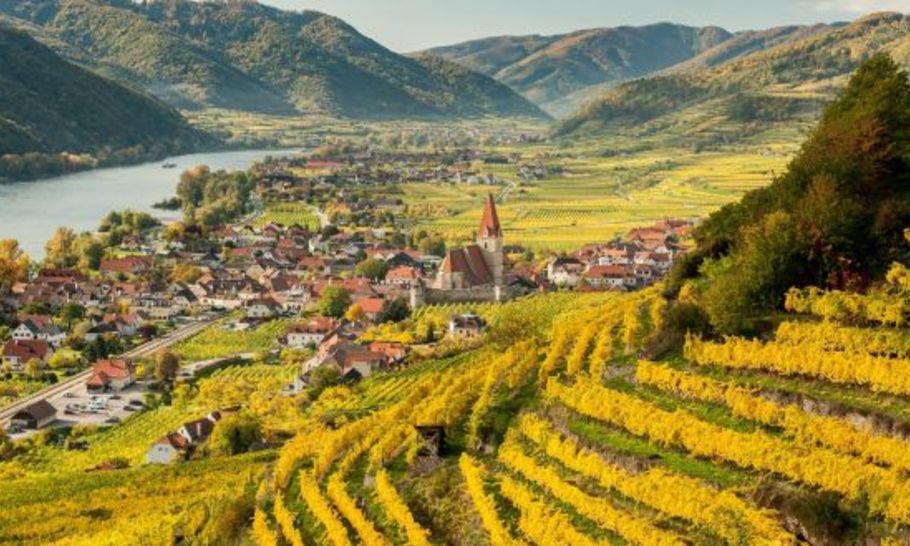 It is Willi Klinger’s last year as the big man in Austrian wine, and his swansong has been to commission a 700-page German-language history of Austrian wine to appear in the autumn. A slightly shorter version in English is due out by Christmas. With this in mind, in the past fortnight scores of journalists from all over the world have been ferried out to Austria to experience itswine and history at first hand.

Of course Austria is only a fragment of its old, historical self. Until a century ago, the Austro-Hungarian Empirewas divided up into two administrations: Cis- and Transleithania. Cisleithania, west of the River Leitha was run from Vienna while Transleithania centred on Budapest. As far as the wine-producing provinces were concerned, Vienna had the job of ruling not only Lower Austria, Carinthia and Styria but also Bohemia, Moravia, coastal Croatia and Slovenia; while Budapest looked after Hungary, Burgenland and Slovakia, as well as inland Croatia.

When the empire found itself on the losing side in the Great War, the Treaties of Saint German and Trianon of 1919 and 1920 respectively decided the fates of the now divorced Austria and Hungary. The principle of self-determination led to the creation of new states in Czecho-Slovakia and Jugoslavia which often failed to recognise cultural and linguistic divisions in the borderlands, such as the large German population in Bohemia and Moravia, the substantial Hungarian element in Slovakia, the Slovakians in Burgenland and the Slovenians in Carinthia.

Austria was eventually compensated with most of German West Hungary (Burgenland) even if the largest town (Sopron or Ödenburg) opted to remain with the Magyars. Elsewhere the people in the frontier villages remained much the same. German-speakers continued to speak German and cast an eye towards Vienna. In many cases their families fell either side of the fence and complicated arrangements had to be made to allow them to see one another. This was also the case with vineyards that had been riven in two. Special passes had to be issued to allow them to cross the borders to tend their vines. Naturally, the grapes stayed the same (they are no great respecters of political divisions), as did the idiom of winemaking: in those days both in the Austrian Weinviertel and Czech Southern Moravia the mainstay was Pinot Blanc (Weissburgunder) and Sylvaner, while in Central Burgenland and the Hungarian Pinka Valley it was the black grape Blaufränkisch. In Slovenia there was a lot of Welsch or Italian Riesling, and Gewürztraminer as well as small amounts of other, nobler grapes like Chardonnay (Morillon) and Sauvignon Blanc on both sides of the border.

We heard a lot about the effect on families and wine wrought by Saint Germain, but far less about the effects of the Germany’s defeat after the great racial war of 1939 to 1945. The effect was not so dramatic on the Hungarian Border, although German-speaking people were careful to keep their language to themselves before 1989. In 1956 the border witnessed some 200,000 Hungarians fleeing to Austria, some of them using a little wooden bridge at Andau which had survived to serve winemakers who had needed to get to their grapes on the other side of the wire.

Germany’s defeat began a process of ethnic cleansing on the country’s northern and southern borders. In Southern Moravia there were ‘death marches’ when the German-speaking population of Brno and Mikulov (Nikolsburg)were driven over the border at the River Thaya. Those banished included many winemakers, like Franz Künstler who eventually found work on the German Rheingau where his son Gunter is now one of the top winemakers. In Western Yugoslavia (Slovenia) the situation was hardly less fraught. After the dust settled, some border-dwellers were able to procure passes to cross the Iron Curtain to see relatives or tend their land, but if they were deemed politically suspicious, permission was denied.

Even Austria was stymied for the next ten years, as its eastern regions (Lower Austria and Burgenland) formed the country’s Soviet Zone until the State Treaty of 1955. What was curious was that viticultural developments behind the Iron Curtain kept track with changes in Austria. When ‘high training’ replaced the use of stakes to grow vines in the sixties, the Weinviertel north of Vienna was soon awash with Veltliner, and neighbouring Southern Moravia followed suit. The adoption of Grüner Veltliner almost wiped out Pinot Blanc and Sylvaner as neither adapted well to the new training.

The situation was normalised in 1989 when Austria and Hungary’s foreign ministers started taking down the Iron Curtain, allowing chiefly East German refugees to walk into Austria. The South Styrian Wine Road had always run partly through Slovenia and since the fall of communism Austrians have been buying up land in the former ‘Lower Styria’ (Slovenia). On the Hungarian border there has been notable cooperation, withAustrians collaborating with Hungarians to make better wine, and many Hungarians are working on Austrian estates. Only perhaps on the old Czech Border is there still some residual animosity. That was where the greatest violence occurred in 1945 and you still encounter monuments on the Austrian side bewailing the loss of life and land that occurred in those savage days in May.

It was generous to let us taste wines from Moravia, Slovakia, Hungary and Slovenia as well as home-grown samples, but so far at least, there was little risk of our preferring the non-Austrian wines which are rarely as good as those produced in  the old mother-country. One producer who has acquired land on the Slovenian side of the border since 1989 is the excellent Alois Gross, some of whose wines are available in Britain from Alpine Wines. The following is a Sauvignon Blanc with rare bottle age . I note that the importer usually stocks their delicious grapefruity Scheurebe (the Austrians generally use its scientific designation sample 88’) which is almost always a safe bet, and is considerably cheaper! The name Scheurebe is another victim of history, as the inventor of the Riesling crossing Georg Scheu was a bit of a Nazi; but then again, so was the creator of the excellent Blaufränkish x Sankt Laurent crossing that bears his name, Friedrich Zweigelt!