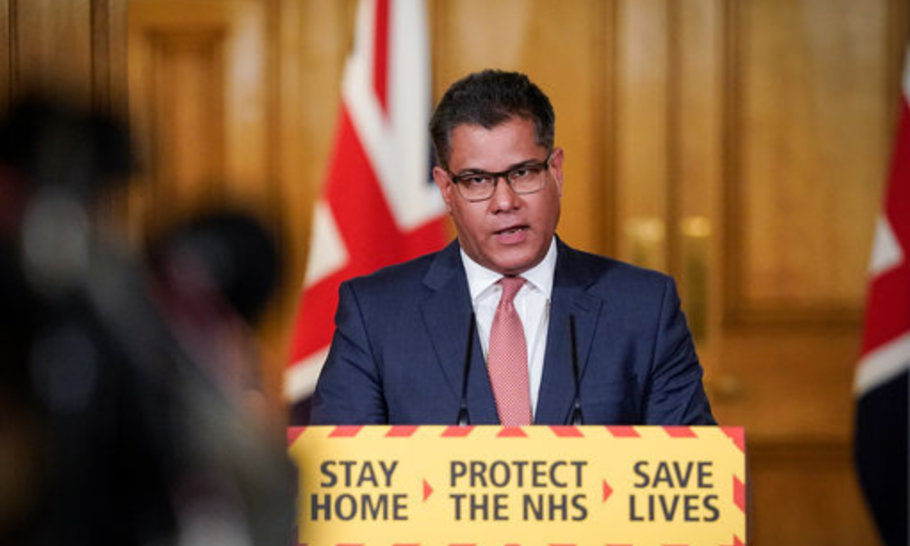 Nicholas Soames has become something of a twitter minor star by ending his tweets with spectacularly long hashtags. He came up with a belter after Education Secretary Gavin Williamson’s Downing Street briefing yesterday.

Williamson’s Cabinet colleagues have set a very low bar in recent days — he took it even lower. We should be pleased, and I am, that at least one Cabinet minister doesn’t sound like he went to the same private schools, Oxbridge colleges, banks, hedge funds and right-wing newspapers and periodicals as so many of his Tory colleagues. It is not just his East Yorkshire accent, however, but his delivery and manner, that make him sound like a love child created by Private Pike in Dad’s Army, and Mr Humphries in Are You Being Served.

One of the most comical parts was when he spoke direct to the camera, addressing children at school, like a very bad school prize-giving. I half expected him to say: “You will look back on the lockdown as the best days of your life.” It was clear from both the words and the delivery, that he really thought schoolkids and students had stopped everything they were doing to gather round the telly and watch The Gav’nor.

Given his subterranean profile since being put in charge of England’s schools, I seriously doubt the majority of those to whom he thought he was speaking, as he felt their pain in the exams they couldn’t sit, and the friends they couldn’t see, have the faintest idea who he is, even if they were watching.

In common with other ministers who have gone before him, he clearly felt that he was auditioning for a prime speaking slot at the Tory Party conference, going through his area of responsibility — education — and dragging out as many vaguely Covid-related issues as he could, before wrapping up with a “Father of the Nation” pitch for which neither he, nor any of the earlier auditioners, were remotely qualified.

He was possibly taking his lead from Saturday’s briefing by Robert Jenrick, Secretary of State for Housing, Communities and Local Government. The Saturday slot is clearly now allocated to a minister who has been in hiding to avoid difficult personal questions. Last Saturday, it was Home Secretary Priti Patel, the first woman to be allowed at a lectern. Next Saturday, might it be Jacob Rees-Mogg who is finally allowed out of whatever box he has been placed inside for the duration?

The tricky question Patel faced was “where have you been for so long?” and she was able to knock off a few of the briefing bingo words that have kept the dwindling viewership moderately amused as they struggle to find a fact amid the ministerial word salads… where she had been, she was keen for the world to know, was working hard, night and day, round the clock, flat out, playing her part in this unprecedented, Herculean challenge in which the Prime Minister had been leading from the front.

Jenrick’s sticky wicket arose from a story that he may have broken the government’s own lockdown rules in flitting between homes so numerous one wonders if he got the job as Housing Secretary because he owned so many of them. Unlike Patel, Jenrick has been allowed out more than once, so must be deemed by the Downing Street spin machine to be moderately effective.

Perhaps it was this, or some very bad media training, which gave him the confidence to try a few out-of-context, exaggerated hand movements, and stern new eye looks.

There were points where he was building towards what those of us who have spent a lifetime writing and making speeches know to be a “clapline.” A clapline strikes me as wasted when there is nobody in the room to clap, apart from a shaven-headed medical adviser looking increasingly concerned as Jenrick continued to work up the non-existent crowd with exciting news about parks and cemeteries, and then a rousing spiel about what we are finding out about ourselves as a country as we go through the crisis.

Unlike, I suspect, most schoolkids, I have watched every minute of every briefing, except for twenty minutes of Business Secretary Alok Sharma the other day, when, Nick Soames/near death like, I simply lost the will to live, and hit the remote. You can only shout “answer the f—ing question!” so often. Sharma is another one clearly deemed by Number 10 to be a safe pair of hands, and is a regular stand-in when none of the main players can be arsed to turn up and listen to Robert Peston working out how to end his question. Yet Sharma not only doesn’t answer a question, he reframes it as a different question; and then doesn’t answer that one either. I watch him, and listen to him, and wonder what level he might have reached in a Margaret Thatcher government — parliamentary bag carrier to Norman Fowler, maybe.

Sharma does sound part of the Eton/Oxbridge/hedge fund/right-wing newspapers and periodicals set. Born in India, he moved to Reading with his family when he was five, went to a minor public school and then the University of Salford, yet he outposhes the poshest of them. His degree was in physics, but that does not seem to help him when asked about anything remotely scientific. He then became an accountant, yet though he does not invent numbers, as Patel did with her “three hundred thousand thirty four nine hundred and seventy four thousand” number of Covid tests, nor does his professional background help him to answer numerical questions. “We’re all very well aware of how indebted we are to frontline staff,” does not strike me as a direct answer to questions about how many have proper protective equipment, or have been tested.

Michael Gove has been an occasional presenter and though he is grammatically flawless, as though imagining his words wafting direct onto the pages of the Times and the Sunday Times, a powerful sense of his personality, and history, leave you wondering what the hidden agenda behind the crystal clear words might be. Dominic Raab has this odd habit of stopping half way through sentences, as if he is suddenly asking himself how he became the de facto Prime Minister, and perhaps deep down knows that many people watching are asking the exact same thing. Chancellor Rishi Sunak has had rave reviews for his performances, and I can see him going down a storm at Davos, but he looks like a man who knows the devil is in the detail, and therefore the sooner he can get back to the Treasury and work out how what he has announced might work, the better.

I therefore find myself typing six words I never expected to write…. “to be fair to Matt Hancock…” The Health Secretary also avoids direct questions, overdoses on platitudes and sounds like he wants a round of applause for all the hard work he is doing. He also provoked my loudest shout at the telly when he swerved a question about how many doctors and nurses had died with the extraordinary words: “Yes, I think this is a question for you Ruth.”

He too, I suspect would have struggled to get beyond the lower ranks of a Thatcher government, and it says something about how desperate our politics has become that he is, dare I say, not as bad as most of the above.

#doitlessdoitbetterandusebigcompetentknowledgeableMinistersonly — so pleads Winston Churchill’s grandson. Where are those competent, knowledgeable ministers?

All this is helping the Boris Johnson team, and his media supporters, to shape a narrative that this crisis will not be resolved until he is fully back in the action. This conveniently overlooks the fact that he was more responsible than any of them for the mixed messaging that bedevilled the government in the early days of the crisis, and that one of the main reasons we are vying with the United States in the death league tables is because of things he said and did — or more to the point didn’t do — as the crisis neared our shores.

Big. Competent. Knowledgeable. Ministers. We are not blessed, are we?