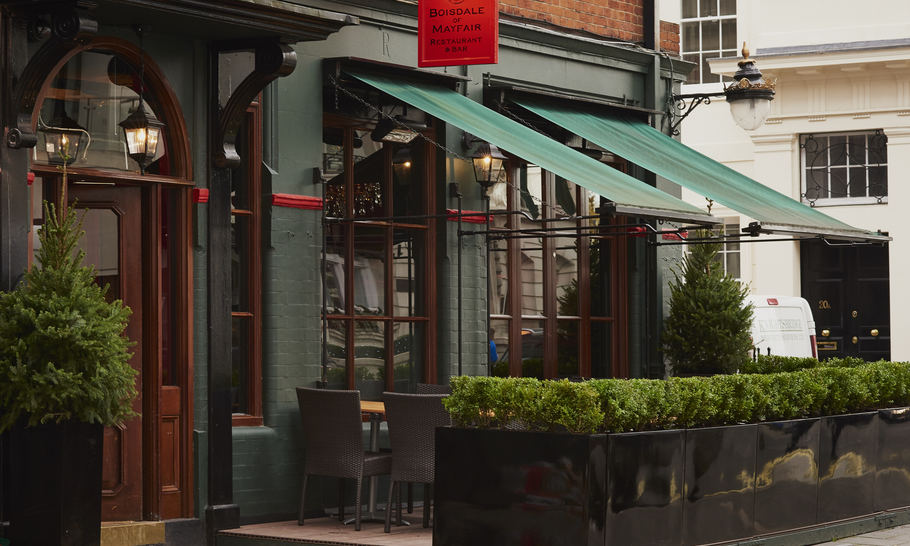 Boisdale, a group of British restaurants, bars and live music venues, is founded on the unexpected but happy marriage of modern British food, Scottish produce, Cuban cigars, live music and whisky. The venues reflect the interests and passions of the founder, Ranald Macdonald, the eldest son of the 24th Chief of Clanranald, who started the business from his mother’s dining table in Pimlico in 1985.

The first Boisdale restaurant opened on Eccleston Street in Belgravia 1989 and was followed by a City outpost at Bishopsgate, a bijou brasserie and bar in Mayfair; and a two-floor establishment in Canary Wharf comprising a music venue, two restaurants, two bars, cigar shop & library and terrace.

Boisdale, named after the remote port on the Isle of South Uist in the Outer Hebrides, endeavours to offer ‘the very finest from ages past’ in a modern world. This remit extends to the best Scottish produce made by age-old methods, the best malt whisky from the Highlands and Islands, live jazz, blues, soul, reggae and occasionally pop and hand-rolled Cuban cigars. The distinctive formula has proved to be a successful one appealing to an eclectic crowd of regulars and destination diners. The atmosphere is reminiscent of a Highland country house, warmly welcoming to people young and old from all walks of life, united in their love of genuine hospitality that is both current and tethered to centuries of tradition.

Scotland’s own natural larder is the source of most of the food served in the group’s restaurants. The quality of the meat, wild game and seafood is impeccable. Diners have come to expect the best smoked salmon – Scotland’s most famous export after whisky – from small family-owned farms and smokehouses, dry-aged, grass-fed, purebred Aberdeen Angus beef, red grouse from the heather-clad moorlands, Highland black face lamb, venison, plump diver-caught Orkney scallops and native oysters from Loch Ryan. Many guests come expressly to try the haggis, served traditionally with mash, bashed neeps and a noggin of Scotch whisky, only here it’s roasted – never boiled – for optimum flavour and texture.

Live music at Boisdale has a global reputation. Jools Holland is Boisdale’s Patron of Music presenting the very best in jazz, blues and soul and occasionally pop and rock’n’roll. Tatler Magazine described Boisdale as “London’s No 1 jazz venue” – the music is fresh, spontaneous and infectious, often improvised and without an off-puttingly strict no-talking policy during performances.

Boisdale makes no secret of its predilection for whisky. A noggin or two from the restaurant’s 1000-strong list of whiskies should be part of any evening spent at Boisdale. Boisdale bars attract serious whisky connoisseurs for their selection of special blends and highlands and islands malts complemented by single grain, premium blended, Irish, Japanese and American whiskies. Boisdale’s whisky menu was voted The Imbibe Whisky List of The Year 2018.

Wine is not forgotten. Boisdale grew out of Ranald Macdonald’s passion for wine and remains serious about listing hard-to-find vintages, larger format bottles and best-kept secrets from small producers. Bordeaux, Champagne and the New World are particular strengths of the cellar. Boisdale also boasts one of London’s best port selections. House wines start from £23.00 a bottle.

Boisdale has probably the most comprehensive choice of handmade Cuban cigars of any restaurant in the world. Boisdale has nurtured relationships with suppliers over the years which allows it now to offer old and rare cigars that simply cannot be found elsewhere. Its collection includes over 160 different sizes and vintages from seventeen different brands and all stored in perfect condition.

Boisdale of Canary Wharf has a 16-metre square walk-in humidor with members’ cigar lockers. It is supplied by Hunters and Frankau and by Mitch Orchant of C.Gars Ltd.

Boisdale cigars food live music restaurants Scotland whisky wine
We use cookies to ensure that we give you the best experience on our website. If you continue to use this site we will assume that you are happy with it. Ok Privacy policy