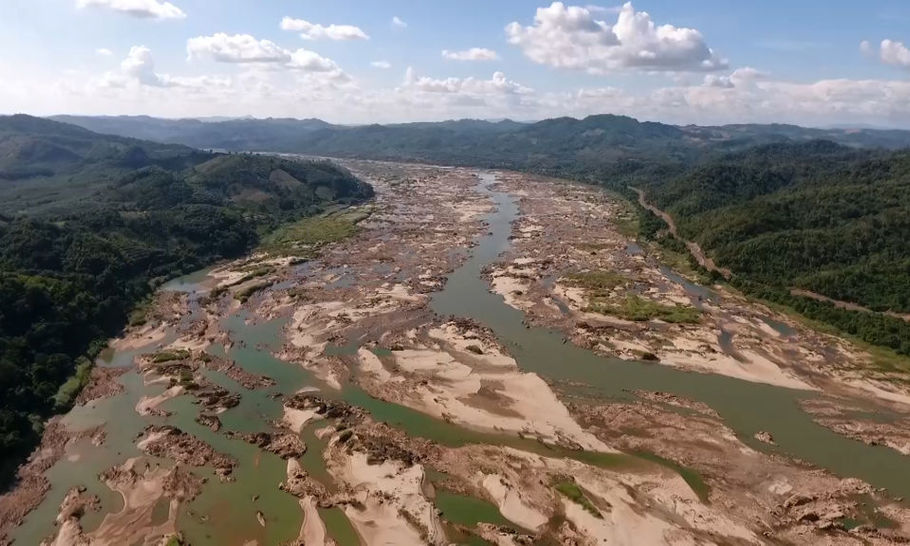 In his book, River of Time, Jon Swain evoked brilliantly the heady beauty of Indochina and the great Mekong Delta in the very south of Vietnam, where the river finally meets the South China Sea. He also captured the terrifying uncertainty as the Vietnam War came to an end and the Khmer Rouge marched into Phnom Penh.

The plot twists and turns against a backdrop of jungle and the fabled Mekong River, which in full flood covers an area larger than Belgium. As Swain wrote: “Some rivers are so still, so complacent, so dead that they leave one’s heart indifferent. The Mekong is not one of them. To see it in full spate as it thunders over the Koh Khong falls in a welter of foam in the rainy season, is to know its awesome power.”

But the stuff of legend is fading fast. Drought, climate change and the construction of vast dams are threatening a river system that traverses five countries and feeds 70 million people, many of whom live hand to mouth.

For a second year in a row, the Mekong River is at a record low, reduced to a trickle when it should be heading into a full flood. Water levels are down by two-thirds. Rainfall for the three months of the current wet season is down by about 70 per cent.

Where the river meets the sea, at least two of 12 tributaries have closed. Salinity is creeping further inland, threatening 850 already endangered fish species. Fishermen complain that their daily catch has been reduced to a kilogram or two, barely enough for the village cats.

It’s an unprecedented man-made problem, which the military-backed governments and one-party states of mainland Southeast Asia are choosing to ignore as Beijing and financial institutions pour billions of dollars into hydro-electricity, which brings profit for the powerful few. According to the Stimson Center, the US think tank, a cascade of dams in China and Laos is in the process of construction. By the time is has been completed, there will be 400 dams.

Fish ladders were introduced into the river, to help migrating fish to reach their upstream breeding grounds, but there is little evidence that these have worked. A report by Eyes on Earth has accused China of hoarding water. Beijing denies the charge.

Meanwhile, climate change has exacerbated the impact of the Indian Ocean Dipole, a phenomenon similar to the El Niño weather pattern in the Pacific Ocean and sometimes known as the Indian Niño. This has meant unusually cooler than average sea surface temperatures across the eastern half of the Indian Ocean and warmer water in the west cause floods in East Africa and drought in Southeast Asia. This phenomenon historically occurs once every 17.3 years — but scientists are forecasting its frequency will increase to once every 6.3 years over this century, due to carbon emissions and excess energy in the atmosphere.

Normally, at this time of year, the Tonle Sap lake in Cambodia swells as flood waters rise, then reverses course flowing back into the Mekong River. It’s an annual event that ties Khmer superstitions with harvests and prosperity.

For the first time in living memory that hasn’t happened and the usually sanguine Mekong River Commission (MRC) has found its voice, forecasting that “extreme drought” is now expanding across northern Cambodia, southern Laos and into central Vietnam. It described the plight of Tonle Sap as “very critical” with water depths across the Lower Mekong Basin below the minimum levels recorded in 1960 and 2019.

“The current low flows could have severe impacts on Cambodia due to a loss of fisheries and irrigation potential,” said An Pich Hatda, chief executive of the MRC Secretariat in Vientiane. “It is time to walk the talk and to act in the common interest of the entire Mekong River Basin and the affected communities”.

That means a total rethink of how people live, what they eat and where they call home. The Dipole will reverse and floods are sure to follow, made all the worse by hoarding and too many upstream dams which would be forced to unleash torrents of water. Whether the generals and politicians like it or not, they have made a mess of the Mekong River.

Swain’s memoir is about to be made into a movie, and the author’s own favourite line is: “I have never been able to stand on its tall banks and look down at its great sweep of moving water without the urge to go round the next bend to explore the wonders that may be in store.”

If the producers want to shoot on location they might want to hurry up. Time is running out.