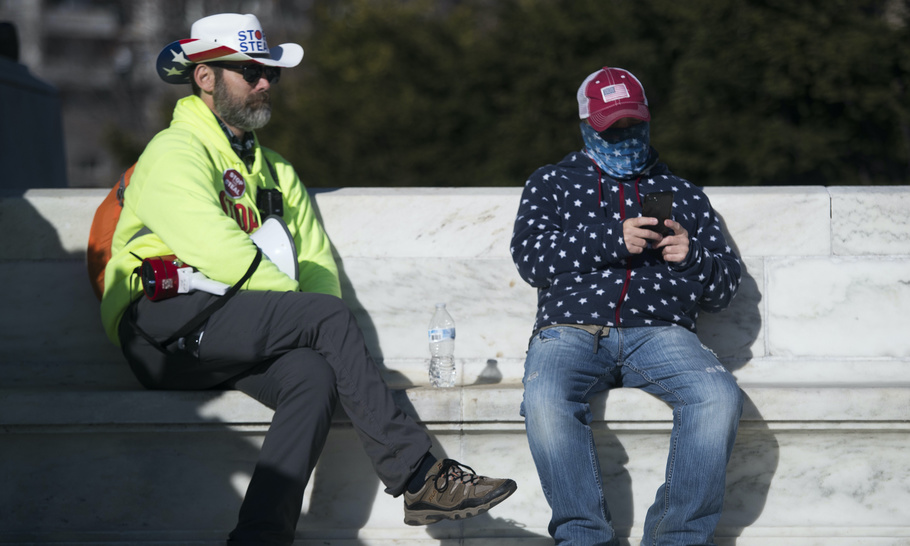 It is tempting to see Wednesday’s Inauguration of Joe Biden as the end of an era. Tempting but wrong. President Trump didn’t invent right-wing white populism. It’s been on the rise since the 1990s.

The Clinton presidency was a key moment. Elected in 1992, he was only the second Democrat president in almost a quarter of a century. The 1990s saw the Waco siege in Texas (1993), the Oklahoma City bombing (1995), which killed almost 170 people, and the impeachment of President Clinton, the first since Andrew Johnson in 1868.

The febrile atmosphere of the time was brilliantly caught by Philip Roth in The Human Stain (2000). But it was perhaps the film Falling Down (1993) which caught the growing sense of white rage in the ‘90s. William Foster (Michael Douglas), a divorced and unemployed former defense engineer, goes on the rampage in LA. Martin Prendergast (Robert Duvall), an ageing Los Angeles Police Department sergeant on the day of his retirement acknowledges Foster’s complaints about being let down by society but refuses to accept that as an excuse for his rampage. Most important of all, in 1996 Fox News was launched, giving a popular voice to the angry American Right for the next 25 years.

In the Obama years there was a second wave, with the Tea Party movement, the anti-birther movement and income inequality, which reached its highest point since 1928. Perhaps most important were not political but the social and economic changes which affected white working-class Americans. In her book, White Working Class (2017), Joan C. Williams wrote, “The typical white working-class household income doubled in the three decades after World War II but has not risen appreciably since…In 1970, only a quarter of white children lived in neighbourhoods with poverty rates of 10%; by 2000, 40% did.” By 2020 the supermarket chain Walmart was the largest private employer in 21 states, including the entire South except for Virginia.

Something else started to take off in the 1990s, the epidemic of opiate addiction. 2018 data showed that every day, 128 people in the United States died after overdosing on opioids. The number of drug overdose deaths was four times higher in 2018 than in 1999. From 1999–2018, almost 450,000 people died from an overdose involving any opioid, including prescription and illicit opioids. That is over 50,000 more than have so far died of the coronavirus in the US. According to an article in Nature, “In 2015, something happened in the United States that hadn’t occurred there in the past 100 years: life expectancy entered a period of sustained decline. According to the World Bank Group, the country’s average life expectancy fell from 78.8 years in 2014 to 78.7 years in 2015, and then to 78.5 years in 2016 and 2017.” The last time that life expectancy in the United States showed a similar decline was 100 years before, in 1915–18, as a result of military deaths in the First World War and the 1918 influenza pandemic. “More people in the United States died from overdoses involving opioids in 2017 than from HIV- or AIDS-related illnesses at the peak of the AIDS epidemic.”

What is most striking is who was dying from this epidemic. The hardest-hit communities can be found in the US states of West Virginia, Ohio, Kentucky and New Hampshire. “They’re communities where there is a problem of under-employment; there is a problem of concentration of poverty,” says Magdalena Cerdá, an epidemiologist at NYU Langone Health. According to Nature, “The term ‘deaths of despair’ has arisen to describe the suicides and opioid-overdose deaths of white people in parts of the United States that have been affected by de-industrialisation and economic decline.” The vast majority of deaths, more than 75 per cent, were non-Hispanic white Americans.

Economists Anne Case and Angus Deaton have argued that the rise in deaths from opiates and suicides was primarily the result of wages stagnating over the last four decades and a decline in available jobs. According to the NIH, U.S. military veterans account for a disproportionately high number of opioid-related deaths.

There are a number of other recurring factors, all parts of a larger social breakdown among poor white Americans — in particular, the collapse of the traditional family and the decline in education. In an article in The Atlantic in 2016 (“All Hollowed Out: The lonely poverty of America’s white working class”), Victor Tan Chen wrote, “Nowadays, well-educated couples are much more likely to marry, stay married, and have children within marriage than those with less schooling. The white working class in particular is seeing sharp drops in these indicators—again, not to the levels of nonwhites, but a drastic reversal all the same, and one that has intensified over the last few decades.”

Writing in The National Review in 2016, David French put it succinctly: “Simply put, [white working class] Americans are killing themselves and destroying their families at an alarming rate.”

“The economic status of adults with a bachelor’s degree changed little from 1971 to 2015, meaning that similar shares of these adults were lower-, middle- or upper-income in those two years. Those without a bachelor’s degree tumbled down the income tiers, however. Among the various demographic groups examined, adults with no more than a high school diploma lost the most ground economically.”

A year later, in 2016, Trump won 51-45% of those with high school or less education and lost 58-37% to Hillary Clinton among those with postgraduate degrees. Last month, according to Professor Matthew Goodwin, Trump won two thirds of the votes of white non-college graduates, whereas Biden won three quarters of the votes of non-white college graduates.

Of course, Trump bears some responsibility for what happened at the Capitol almost a fortnight ago. Curiously, though, the news media have been slow to report the number of white men involved that day, how many were military veterans, and to make links with the long-term changes in American society, from opiate addiction to poor education, unemployment and the breakdown of white working-class families. It’s not all about Trump, as President Biden is about to find out.