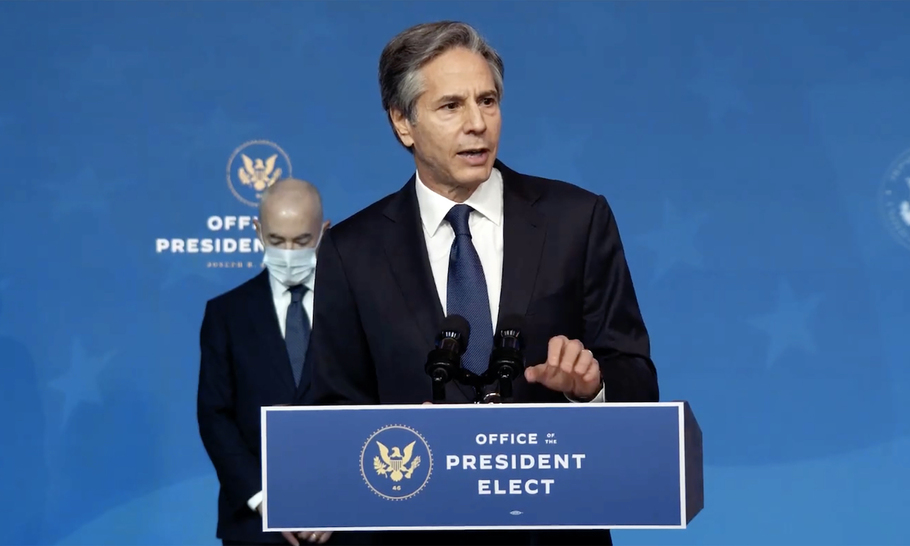 Slowly but surely, power is ebbing away from Donald Trump. The President appeared briefly this week in a vain attempt to take credit for Wall Street’s surge to a Dow Jones record of 30,000. Like all lame ducks, however, he cannot fly. His “rigged election” lawsuits are going nowhere and senior Republicans are tiptoeing away. It is too soon to talk about legacies and pardons, but the Trump era is drawing inexorably to a close.

Meanwhile, the Biden administration is taking shape. The key figure so far is Antony Blinken (pictured), who to nobody’s surprise will be the next Secretary of State. He has worked closely with the President-elect for many years and under Obama served as deputy to John Kerry, who will also play a role in the Biden team as his emissary on climate change.

Blinken is a heavyweight foreign policy intellectual, with impressive academic credentials and long experience in politics, diplomacy and national security. Like Biden himself, he is firmly in the liberal internationalist tradition, but his instincts are perhaps more hawkish than Kerry’s or Obama’s. Raised partly in Paris, he speaks fluent French and his cultural hinterland is European. Blinken is Jewish (though married to a Catholic) and his stepfather was a Holocaust survivor. His support for Israel — though not for Netanyahu — has been solid. In short, he shares many of the liberal views of the Washington establishment, but he will reassure many conservatives who fear that Biden will be putty in the hands of radical Democrats.

Introducing his team, Biden declared that “America is back…ready to lead the world”. But he added that his “core belief” was that “America is strongest when it works with its allies”. There will be no more talk of “America first”, with its isolationist and protectionist connotations. Instead, the President-elect will hope to regain his country’s role as the champion of the free world.

Marco Rubio, the Florida senator who is already positioning himself to run as a post-Trump candidate for the Republican nomination in 2024, dismissed the expertise of the new administration contemptuously: “Biden’s cabinet went to Ivy League schools, have strong resumés, attend all the right conferences and will be polite and orderly caretakers of America’s decline.”

There are echoes here of the powerful critique levelled at Obama nearly a decade ago by John Bolton, Trump’s  former National Security Adviser. Bolton castigated as “the post-American presidency” an administration in which Biden served for eight years as Vice President. Managing decline in the name of globalism won’t cut the mustard in a hostile Senate, let alone in Middle America. Biden will need to show that he has learnt not only from Trump’s mistakes but from his own.

Across the Atlantic, the new administration is already garnering praise and there is a palpable frisson in European chancelleries. But just as Europeans know that Biden will continue the “pivot to Asia” that began under Obama, so he cannot assume that Europe will still be Atlanticist.

In Germany, the defence minister Annegret Kramp-Karrenbauer (known as AKK) has been lobbying for her country to set an example by spending more on defence. She expects Biden to be less disruptive than Trump, but warns Germans not to imagine they can now revert to their long-standing military dependency on the US. Atlanticists like her want to build a better and more equal relationship with Washington by persuading EU electorates that the freeloading is over. Only by stepping up to the plate, they believe, can Europe keep the US on board.

President Macron, by contrast, wants Europe to strike out in a different direction. The lesson of the Trump years, he believes, is that America can no longer be relied on, whoever is in the White House. Nato is no longer very relevant; instead, the EU must promote its values by working with India and a range of developing countries — perhaps even China and Russia. Europe is no longer a junior partner of the US, according to the French President’s neo-Gaullism, but a global superpower in its own right, with interests that are distinct from American ones. He claims that Angela Merkel shares his views rather than her own colleague’s. For the moment, the German Chancellor is keeping her own counsel.

What of Boris Johnson? It would be hard to find a more Atlanticist politician than our New York-born Prime Minister, whose most formative influence was Margaret Thatcher. He has never subscribed to conventional wisdom and, as the man who “got Brexit done”, is often demonised as a populist. Yet he was never “Britain’s Trump” and it was no accident that Biden called him before his French or German counterparts. Other than Brexit, it is hard to think of much in policy terms that separates Johnson from Biden and Blinken. They will work in harmony together on the “three Cs”: Covid, China and climate. There may be slightly different nuances, but on some issues — such as Iran or Hong Kong — the UK is more closely aligned with the US than with the EU.

The world of Biden may prove to differ from the Trump era mainly in being dominated by the desire to return to normality. The Wall Street boom is not a bad omen, but it needs to be sustained by prudent and imaginative policies that unleash the power of the market. If the business of America has always been business, as Coolidge said, the business of Biden will be getting the world back to business as usual. It may seem a modest ambition, but it is not an ignoble one.