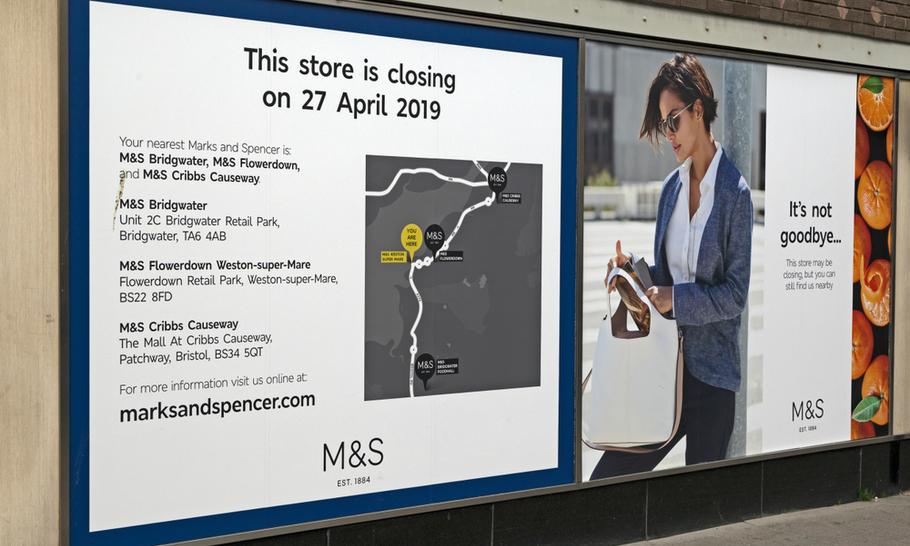 If you live in Darlington, Keighley, Barrow, Stockton, Walsall or Warrington, you probably know that your once-Labour town voted Leave in 2016 and now has a Conservative MP. You are even more likely to know something else. Your town has lost its Marks and Spencer.

For some residents, the loss of their M&S is of little importance; for others it matters more than politics. But if we think of M&S closures not just as a series of local events but as symbols of something larger (and more than just a reflection of M&S’s strategic failures), we can identify one of the great forces that has reshaped British politics, and fighting it will be one of the great challenges facing governments, whatever their colour, in the 2020s.

Leaving aside relocations, M&S has closed 42 clothing stores since November 2016. With few exceptions they were in towns that voted Leave in the Brexit referendum. And “towns” means towns: outside London, M&S has closed none of its big-city stores.

The parallels with the Brexit referendum and recent elections are stark. Three weeks ago, the Tories gained one seat in Birmingham. They gained no seats in any other major British city. Manchester, Liverpool, Leeds and Newcastle all remain Tory-free cities, as do Bristol, Cardiff, Glasgow and Edinburgh; and all eight rejected Brexit.

However, the list of M&S closures takes us well beyond issues of town-versus-city in Labour’s heartland regions. Southern towns such as Clacton, Dover and Weston-Super-Mare have also lost their M&S. They also voted for Brexit. What they have in common with northern towns such as Darlington and Barrow is that they have been struggling economically in recent decades. Clacton and Weston have seen their tourist trade tumble since the 1970s. Dover has one of the lowest rates of business start-ups of any town in Britain.

Think, then, of M&S’s decisions as canaries in the coalmine. The fundamental challenge facing Britain’s towns is easy to describe, but devilishly hard to tackle. It is that many towns evolved with a specific purpose, usually centred on a particular trade or industry (say textiles, or coal-mining, or pottery); that purpose has gone, a victim of economic change, and the town has been unable to adapt sufficiently to make up for what it has lost.

Big cities, too, have faced massive change, and many of them had a grim time in the 1960s, 70s and 80s. But most have adapted better, for example by creating and expanding their universities, which in turn have attracted talent and investment. One benefit of all this, and aiding further development, has often been a vastly improved transport infrastructure (think of Manchester’s trams and Newcastle’s Metro system).

One consequence is that the political bond between industrial towns and cities has fractured. Voters in both used to see Labour as the party that would deliver decent homes, schools, hospitals, jobs and pensions. In the past 40 years, Labour has increasingly become regarded as a party of open, liberal values, which have flourished in the big cities, rather than one of solidarity and social protection, which have failed to shield workers in towns from industrial upheaval. As a result, the politics of identity in towns, with its hostility to outsiders, whether immigrants or EU officials, contrasts increasingly with cities, where the politics of social liberalism and global connections have flourished.

Scale is one source of that fracture. In the quest for urban contentment, size matters. Many towns are too small to have a major university, frequent trains to the rest of the country, a modern full-service hospital — or a thriving shopping centre offering the range of choice available either online or a car journey away.

All too often a vicious circle has set in. Investors stay away; talented people leave, taking their spending power with them; big stores close followed by smaller stores, town centres decline, retired people become an increasing share of the local population; local government finances and services come under greater strain; towns become even less attractive to residents and business who are mobile.

The story is not the same everywhere. There are plenty of specific examples of local regeneration and successful initiatives such as Blackburn’s Cathedral Square, and the Eureka Children’s Museum in Halifax. But mostly they are unable to withstand the full impact of the larger economic forces at work.

The worse thing about all this is that the analysis is not new. The evidence of industrial change and local decline has been visible for decades. What is new is the way the impact of all this, compounded by ten years of austerity, has affected the trajectory of Britain as a whole in the national votes of the past three years.

What, though, to do about the problem? If I were a resident of a struggling town, I would resent being given simplistic advice by a London-based journalist who has woken up to their plight only when it impinges on his chosen specialist subject, political statistics. Here, instead of answers, are some further questions.

What can be learned from the successes we have seen in these towns? Are these merely one-off developments — or can their lessons be applied generally? What difference would be made by improved transport links to cities and other nearby towns? Could better schools and new, affordable homes for young families help to attract talented workers and growing businesses? Or would the extra public spending be better directed elsewhere? Can the decline in many town-centre shopping centres be reversed, or is it wiser to accept their long-term fate and find other ways to revive town-centre life?

How should local people be consulted about all this? Do we need to augment the existing democratic system of decisions being taken by elected local councillors? Where will the money come from to make a significant difference, and how should it be spent? (It is hard to believe that the government’s £95 million regeneration fund, announced in September and to be spent in 69 towns and cities, is remotely enough.) What role can be played by independent organisations such as Business In The Community, and the British Urban Regeneration Association?

The fact that I do not know the answers is neither here nor there. More troubling is that I am far from alone in failing — over many decades — to give these questions the attention they deserve. The beginning of a new decade is a good time to put things right and develop a serious, properly funded ten-year strategy to revive Britain’s struggling towns.