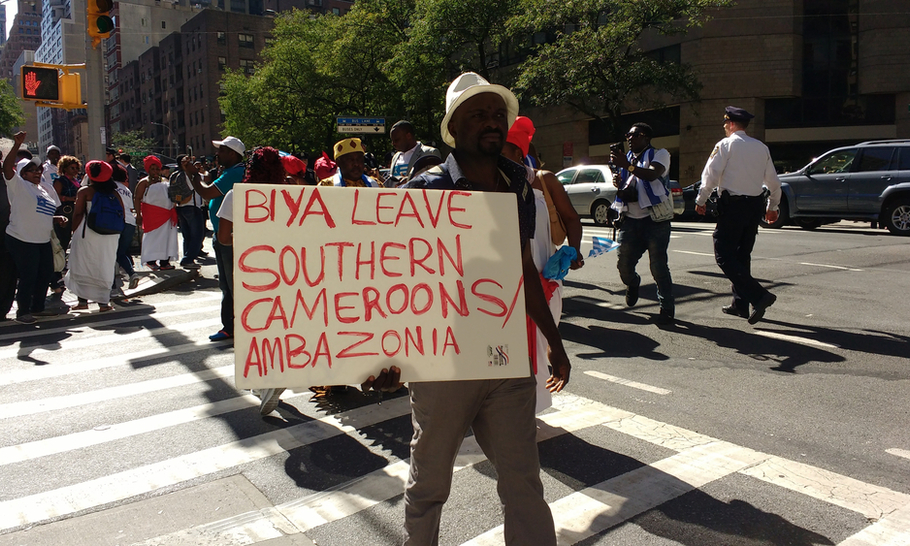 President Paul Biya of Cameroon is, in many ways, your bog-standard African “authoritarian ruler”, or, as diplomats don’t say, “dictator”. He has held on to power for almost forty years and is now in his seventh term as head of state, the oldest and longest-standing ruler in Africa. In 1983, as sole candidate, he won 99.98 per cent of the votes. He followed the example of other one-party states in the 1990s, allowing opposition parties to emerge and simply rigging subsequent elections.

At present, his troops are committing atrocities against an embattled English-speaking minority. They are rampaging through English-speaking villages in a French-speaking country whose economy is de facto controlled by French companies (over a hundred in almost all sectors including off-shore oil).

Cameroon has a civil war on its hands. Anglophone grievances came to a head in 2016, when the Francophone-dominated regime imposed French-speaking judges on Anglophone courts and Francophone teachers in Anglophone schools. Swiss and Commonwealth representatives have tried to mediate but President Biya thinks he can solve his problem militarily and has told both, in no uncertain terms, to go away.

Until 1960, there were two Cameroons. The larger territory was governed by France using the French legal and education systems and language. But in the smaller south and west territories, English common law took precedence, with English judges and English school exams. The present conflict dates back to decolonisation in 1961, when a UN-backed independence referendum offered the Anglophones the choice between joining Nigeria or joining French Cameroon. Thus 20 per cent of the population were not even offered the option of self-determination.

Under President Biya, the Francophone-dominated government, based in the capital of Yaoundé, has marginalised the mainly Anglophone northwest and southwest regions. Only one of 36 cabinet posts is held by an Anglophone. Since 2017, despite the constitution guaranteeing human rights, reputable human rights organisations have recorded the repeated use of force against Anglophone demonstrations. Journalists are arrested and tortured. Government troops, notably the Rapid Intervention Force, have been burning down English-speaking villages, with the result that 656,000 people have fled, between 35,000-50,000 of them into Nigerian refugee camps. Meanwhile, secessionist militias have become increasingly violent. Banditry is rampant. Civilians — including Catholic priests — have been kidnapped, some tortured. Catholic-run schools and clinics have closed, with 800,000 children deprived of schooling. Casualties on both sides have mounted: some 2,000-5,000 have been killed in the violence.

By October 2019, Biya was talking about a “major national dialogue”, but the Anglophone leadership was by now flying under the flag of a “Government Council of Ambazonia’, its name for the two secessionist regions. A paper promise of “special status” on the Quebec model for the two Anglophone regions was refused; few Anglophone leaders were willing to attend the talks while the repression continued, and “special status” left real power centred on the largely Francophone capital, Yaoundé. Biya is France’s man. He is housing 350,000 refugees from the Central African Republic and Nigeria, while deploying Cameroonian troops to fight Boko Haram. He is useful.

But what is France’s role? France never really left Cameroon. It has never shed a certain chauvinistic pride in the merits of its language, so Cameroon with a majority speaking French is an asset. The French Foreign Legion is dotted around the region.

I remember a high-level exercise in “entente cordiale” on Africa in the early 1990s when John Major was Prime Minister. It was held in one of the grand reception rooms of the Quai d’Orsay, resplendent with the decorative arts of the Second Empire, the ornate home of the French Ministry of Foreign Affairs. The British delegation comprised the FCO, Dfid and international developmental NGOs. We were duly impressed. The French fielded staff from quite different government directorates, notably their intelligence services and military plus a lonely anthropologist. That also spoke reams.

An international group of Catholic bishops, brought together by the Toronto-based — non-partisan — Global Campaign for Peace and Justice in Cameroon, has recently signed an open letter to President Biya. They call on the president to join Swiss-led negotiations to address Anglophone concerns and claims. Increased international pressure is necessary if this is ever to happen. But Biya rejects what he claims is foreign interference in a domestic issue, insisting on a “home-grown peace initiative only”.

As the bishops wrote: “When the international community ignores escalating atrocities of the kind happening in Cameroon, it often ends up paying a massive bill. Sooner or later, we must fund refugee camps and peacekeepers, host negotiations, accommodate thousands of migrants seeking asylum, and then help rebuild shattered nations. It makes more sense to use diplomacy to stop the violence at an early stage, finding a political solution to a political problem through inclusive peace negotiations”.

Europe, including Britain, remains distracted by Brexit, but the US has begun to apply pressure, distancing itself from the Biya regime by reducing military aid and removing favourable trade status. It is time for another visit to the Quai d’Orsay and for a little more entente cordiale.