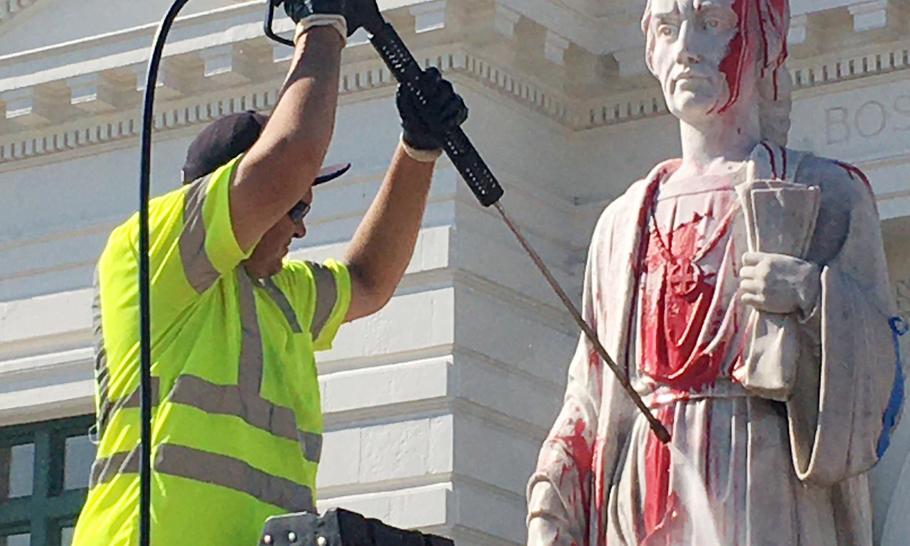 In the United States, Columbus Day has traditionally celebrated the discovery of America by the Genoese navigator in 1492. This year it was a little different. President Biden chose instead to mark Monday’s holiday as Indigenous Peoples’ Day, while Vice President Kamala Harris told the National Congress of American Indians that “those explorers ushered in a wave of devastation for tribal nations — perpetrating violence, stealing land and spreading disease.” Pointing to poverty and unemployment among native Americans, she promised to improve on the Trump administration’s package of support: “This persistent inequity, this persistent injustice, is not right.” In the Vice President’s indictment of “this shameful past”, Columbus himself didn’t even warrant a mention.

Here in Britain, the peace of Belgrave Square in the heart of London’s diplomatic quarter was disturbed by an offshoot of Extinction Rebellion, who vandalised the statue of Columbus there; four arrests were made. In the United States, at least 36 statues of the Grand Admiral have been taken down; interestingly, however, more than 140 remain and Italian Americans in Chicago are demanding that their Columbus statue be restored.

So: was Columbus a hero or a villain? And how should post-colonial societies such as the Americas, or for that matter post-imperial ones such as the British or Spanish, commemorate their histories? There is, of course, nothing wrong with acknowledging the indubitable suffering of native peoples during and after the period of colonisation. In the case of Columbus himself, the island he found and named Hispaniola (now divided between San Domingo and Haiti) endured severe depopulation, mainly due to the inadvertent importation of European diseases against which the inhabitants had no immunity. As many as two-thirds of them are now thought to have died.

It is also true that Columbus himself could be harsh, though scarcely less so towards his own men than he was towards those he subjected to Spanish rule. He was certainly not, as protesters claim, “the father of the slave trade”: that had already flourished in both Atlantic and Mediterranean societies long before he was born, and was long established on the African coast then being explored by the Portuguese. But it is true that Columbus did enslave a number of the native Tainos in his domains, sending a few back to Spain to be sold or presented to his sovereign and investor, Queen Isabella of Castile. The latter was highly displeased with him for treating her vassals as slaves and ordered them to be freed. This particular form of transatlantic slave trade, from West to East, thus never flourished. The importation of African slaves to America began later, after Columbus’s death.

Surely, though, the Grand Admiral who discovered and opened up what soon became known as the New World deserves commemoration for his achievements, not to be airbrushed out of history on account of his incompetence as an administrator and for attitudes he shared with most of his contemporaries. Columbus was a magisterial, mystical, even monomaniacal man; some thought him a crank, but he was also a genius. Nobody else shared his conviction that the Indies could be reached by circumnavigating the world, yet after many years of lobbying he managed to persuade the Spanish monarchs and their advisers to back his expedition. The objections to his theories were not, incidentally, based on the notion that the Earth was flat, but on the best science of the day, which suggested that the planet must be much larger than Columbus believed — and therefore the “Ocean Sea” (as the Atlantic was known) must be too wide to be traversed in the ships then available. As I wrote here in a review essay about Conquistadores: A New History by Fernando Cervantes, “had he not clung with such stubborn tenacity to his erroneous geography, Columbus would never have set off at all”.

Historians such as Cervantes and the late, great Hugh Thomas offer a more balanced view of the Conquistadors and later empire-builders of America. Yes, they destroyed ancient civilisations and subjugated the survivors. But in their wake followed others, such as the Dominican missionaries and later the Jesuits, who condemned the brutal colonial regimes and affirmed what we would now call the human rights of the indigenous peoples. The liberation of Latin America would take centuries and is still a work in progress, but the history of that continent is by no means an inglorious one, however much it has been tarnished by the “Black Legend” of anti-Catholic propaganda.

In North America, slave-owning settlers eventually rebelled against the British monarchy, but did so in the name of the rights of man. “We hold these truths to be self-evident, that all men are created equal, that they are endowed by their Creator with certain inalienable Rights, that among these are Life, Liberty and the pursuit of Happiness.” Once Thomas Jefferson, in the name of Congress, had inaugurated what would become the United States, using this noble prose in the Declaration of Independence, there could be no going back. Though it took many more years and a civil war, emancipation from slavery came to the land of the free for black Americans too.

It would be more dignified for American leaders, North and South, to combine awareness of past crimes and mistakes with an appreciation of what they owe to the pioneers and pilgrims who made their present prosperity possible. The New World and the Old have each incurred incalculable debts to one other, debts of gratitude which far outweigh the mutual recriminations that have surfaced recently. The impulse to travel and discover is a profoundly human one, which cannot be denied, regardless of the consequences. Columbus was one of the first and remains the greatest of his kind. And however much we may deplore the price humanity has paid for the creation of new societies by the boldest and most adventurous members of older ones, it is absurd to ignore the benefits, both material and intellectual, of such enterprises. The discovery of America is one of the greatest acts in the drama of human history. To write Christopher Columbus out of the script is to deny this undeniable truth. That is not merely foolish, but wicked to boot.