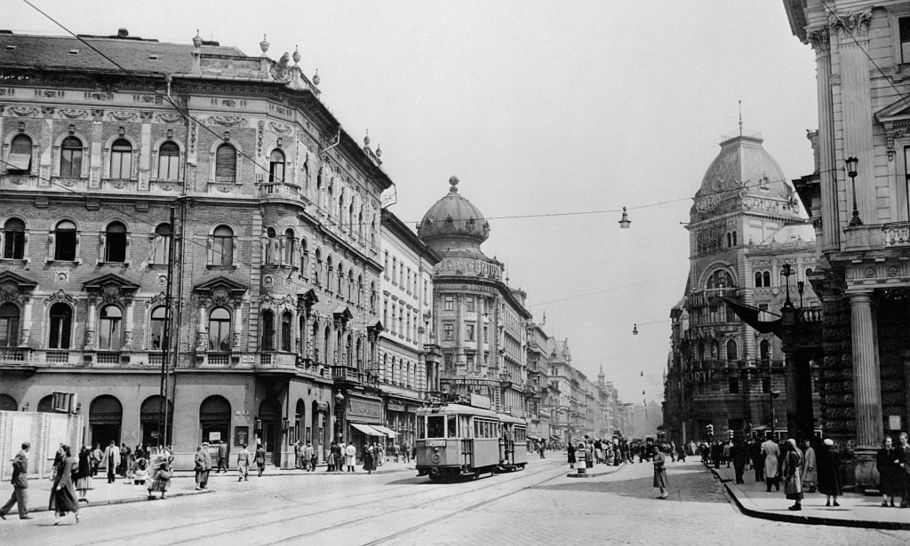 It was 1945. The Russians came in. They stayed for 45 years. Hungary was poor before the war: often referred to as the country of 3 million beggars. After the war, and its devastation, the country was even poorer. Communists seized power in 1948. They gave land to the landless. They nationalised industry. They wanted to create Paradise on Earth. For the many not for the few. For the workers and peasants- for the intelligentsia. Well, not for the old intelligentsia. Those belonging to that elite had not done much for Hungary. They had served Horthy; they had liked Hitler, they had idolised the ideas of the Nazis. The Communists wanted a new intelligentsia which would change the country: new engineers, new teachers, new scientists, new economists.

So how do you go about creating a new intelligentsia, an intelligentsia that the Party can count on? They must come from workers and peasants who will be able to build a new country, a socialist country, full of shiny happy people. How do you do it? Well, you have to start from scratch. It is not as difficult as it sounds. There is bound to be a vast pool of talent, people who missed education when they were of school age but retained the capability to think, to reason, to understand. Among four million eligible people there must be many bright ones. How many? Say one in four hundred? That still means ten thousand people.

Okay, then what? You take a couple of thousand intelligent people, men and women, preferably young, and tell them, that they are privileged, that they can have a year of study to get a school-leaving certificate, that will entitle them to enter any University without an entrance examination. To bolster their confidence they are told that they are the chosen ones, they can do anything. I shall call them SALC (Special A-level Certificate) students.

I come into that picture in 1949 in my second year as an undergraduate at the faculty of Mechanical Engineering of the Technical University of Budapest. It was the beginning of October. Several hundred SALC students joined in the first year. They were proud, domineering, fearful, bewildered. The previous record of 320 students in the first year suddenly doubled. There was only one Lecture Room that could accommodate that number of undergraduates.

The Communist Party appealed to the students, particularly to students of the second year in the same faculty. Among others I volunteered. I accepted a  woman of advanced years to look after. She was 32, I was 19. Her manners were easy, but her maths was terrible. She could manage fractions but that was all. I couldn’t imagine how she could have passed the SALC exam, however easy it may have been. She did not understand algebra; she had only the vaguest notion of what a co-ordinate system was and she was unable to differentiate even the simplest function. The concept of integration was utterly alien to her.

My job was to make sure that she would pass her first year exam in mathematics. I started her off with fractions, to give her confidence. I spent one hour with her every day of the week, excluding Sundays. She was receptive and progress was steady. By next April she was quite competent. By June she was ready to take the exam. I thought with a bit of luck she might get the highest mark (there were five grades, the lowest 1, meaning failed, the highest 5) but reckoned that in the worst case she would get a 4.

She had an oral exam with one of the recently appointed Mathematics Professors. Examinations were public. I sat in a back row. The Professor realised that she was a SALC student. He asked her to go to the blackboard and do a very simple derivation. She did it. He asked her to do a fairly simple differentiation. She did it. It was all over in 6 minutes. He gave her a 3.

Well, in a way, the only important thing was to pass the exam. She passed. She was satisfied. I, on the other hand, was not. In fact, I was pretty annoyed. We had worked hard for 8 months. She could have done all the derivations, given all the proofs required and been able to solve any of the examples coming up in the exam. So why did she not get at least a 4? Because the Professor was a coward. An unprincipled coward. He had been recently appointed to the post and until then had been teaching mathematics in one of the better secondary schools in Budapest. He was catapulted into the Technical University as a Professor of Mathematics based on his early membership of the Communist Party.

I deplored what happened, but I suppose I understood the Professor’s predicament. It was a public examination. If the audience saw a student knowing very little mathematics, the Professor had no choice but to fail the student. Failing a SALC student would have been a betrayal of his Communist Party membership. It was against the Party line to fail a member of the future intelligentsia. So he balked at taking any risk. He had obviously figured out that it would make no sense for him to ask any difficult questions — not even a simple integration. The woman of advanced age, 33 by that time, thanked me and gave me a peck on the cheek. I wished her good luck. The year after I migrated to another faculty. I never saw her again.

Sixteen years later when I became a Fellow in Engineering at Brasenose College, Oxford, I tried to introduce a similar system. (Student mentorship by other students, rather than Communism.) I kept on asking my best students whether they were willing to look after weaker students, to help them when the need arose, particularly between tutorials. In two decades I succeeded only once. He was a believer. He did it as his Christian duty. Of all those who refused to accept my plea, only one deigned to explain why. He belonged to the third generation of Brasenose men. His grandfather donated to the College a magnificent silver bowl often displayed at the High Table. He said, “Sorry, I just can’t take this on. No way. I like your tutorials and you obviously know your stuff. But you were never an undergrad here. You don’t know how busy an Oxford undergrad is, you don’t know how much I have on. Yes, I’m decent in engineering but other things matter to me too: sport and women. I play lacrosse for the University, and as for women, you’ve  already seen me with several girls this year. I would have to make time to take on this lame duck of yours. And why would I do that?”

So what is the moral (morality?) of the story? There are several, possibly contradictory. Some Professors in Hungary had already been corrupted by 1950. The main idea was to serve the Party. If the Party wanted SALC students to pass, then it was the duty of the Professor to act accordingly. How about the moral stance of my lacrosse playing womaniser? He made his point. He wanted to enjoy life. There was nothing wrong with that. After all, Carpe Diem was not invented in the 20th century.

But let me go back to another, more interesting question. Are we to condemn the mass production of SALC students on the grounds that it is a clear example of social engineering for the benefit of a dictatorial regime? I am not sure. At the time I was proud of the role I played, and I am still proud. If you make it possible for someone to realise his/her  potential, does that put you on higher moral ground? Whether it is social engineering or not, is immaterial. Surely, helping someone consistently for months on end, without being paid, must leave you standing on high moral ground. Mustn’t it?