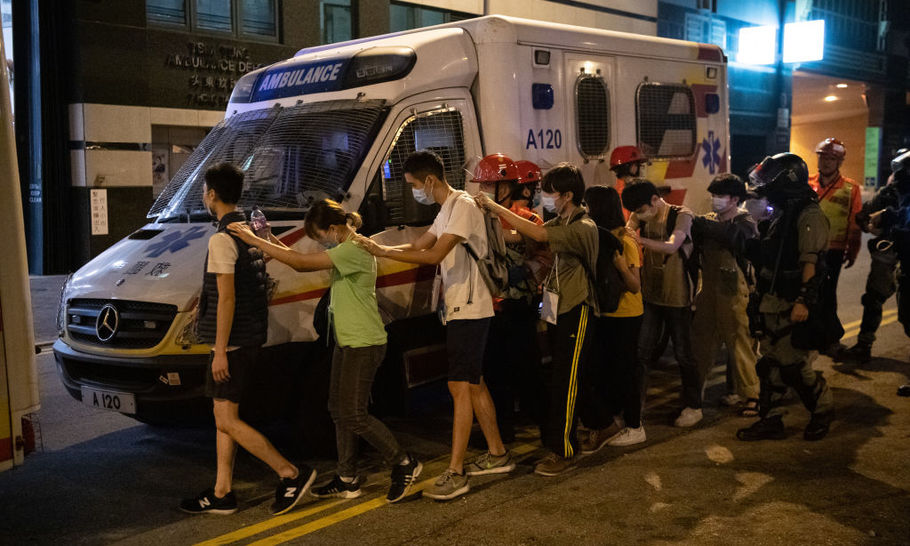 With the authorities in Hong Kong intent on forcing a final, decisive victory over pro-democracy demonstrators hunkered down on university campuses, the administration of Chief Executive Carrie Lam would be badly mistaken if it believes the end to political unrest is near.

Lam, a former bureaucrat nicknamed “the nanny,” does not like to be contradicted and has ignored the demands of protestors and good advice in equal measure, ever since the five-month ordeal erupted shortly after the 30th anniversary of the June 4 Tiananmen Square massacre.

She did shelve proposed legislation that would enable Beijing to extradite people the communist rulers didn’t like, the spark that prompted an historic turnout of two million people – more than a quarter of the population – who shut down the freewheeling city.

But she has proven incapable of dealing with the more complicated issues that do deserve a hearing.

These include an independent inquiry into police brutality, the release of 3,000 protestors – a third of them are younger than 18 years old – an end to characterising protests as riots, universal suffrage as was agreed to with Beijing before the 1997 handover from British sovereignty, and her resignation.

All, including her resignation, are negotiable but with a scent of victory in her nostrils, Lam is not in the mood. Numbers have dwindled since her government announced a ban on wearing face masks – flouted by the hardcore but adhered to by moderates. On Monday, Hong Kong’s High Court declared the emergency measure unconstitutional, restoring a layer of protection for the vast majority of Hong Kong people who support a pro-democracy movement that has evolved for more than two decades.

The government’s announcement on Monday evening of a “reduced chance” that local district elections will go ahead on November 24 will not inspire confidence in Lam’s future.

Hong Kong has a storied history of protests and riots since World War Two. The three deadliest were also rooted in politics, flamed by poverty and falling standards of living, and fanned by governments that prefer not to listen to the wishes of their people.

The nastiest riot was in 1956 when Chinese Nationalists clashed with Communists. The Swiss vice-consul and his wife were among the 59 dead, after their car was doused with petrol and torched.

Protests again turned to riots a decade later when the British colonial administration considered a plan to raise prices for ferry rides across the harbour. Protests were short-lived and one person was killed, but among the 1,800 arrested was a core of Leftist militants who would re-emerge a year later with anti-British sentiment on the rise.

In 1967, a labour dispute erupted into five months of street battles and a bombing campaign by Leftists demanding an end to colonial control. Their targets included police and journalists who did not hold the same political views.

Of the 51 dead, 15 were killed by bombings, and the response was harsh. Authorities closed Leftist schools and publications, and arrested the protest leaders – but nor were they without thought.

The findings by an independent inquiry into the 1967 riots would not be out of place in today’s Hong Kong – young people felt alienated, there was a general distrust in government, and the economy was tanking into high unemployment and unaffordable housing.

Those riots would eventually serve as a catalyst for economic spending and social reform.

Lam’s administration has not tackled the core issues that have sustained the latest episode in Hong Kong’s long-celebrated protest movement. That includes Beijing’s failure to honour its promises under the Basic Law, the mini-constitution hammered out with London ahead of the handover, and the economy.

Economically, Hong Kong has thrived since the handover from Britain 22 years ago with fiscal reserves soaring to US$448.5 billion, from US$92 billion. Yet the Chinese enclave has the greatest wealth gap in the world and it’s being felt on the street.

For the middle classes, rents have doubled and wages have halved,and at the extreme end of poverty the number of cage homes, also known as “coffin cubicles,” is about 200,000 compared with 50,000 a decade ago.

Broader poverty is also at a record high, as about 1.35 million people live on or below the poverty line, potentially an enormous support network of angry people in a densely populated city of 7.4 million which was on show when protest numbers swelled beyond a million.

These are government numbers yet it’s an issue that neither Lam nor the protestors want to deal with.

In freewheeling, capitalist Hong Kong, the poor are anathema that the government cannot simply wish away. Among demonstrators, poverty remains unspoken because, as one insider put it, it might divert attention away from their demands, including universal suffrage, which Beijing has refused to grant.

The protests, which could be careering towards an endgame as students and police face-off with Molotov cocktails and tear gas at the Polytechnic University, have taken a dreadful toll on a city renowned for its freedom and chutzpah. Negotiation is the only solution, if only Lam would listen.