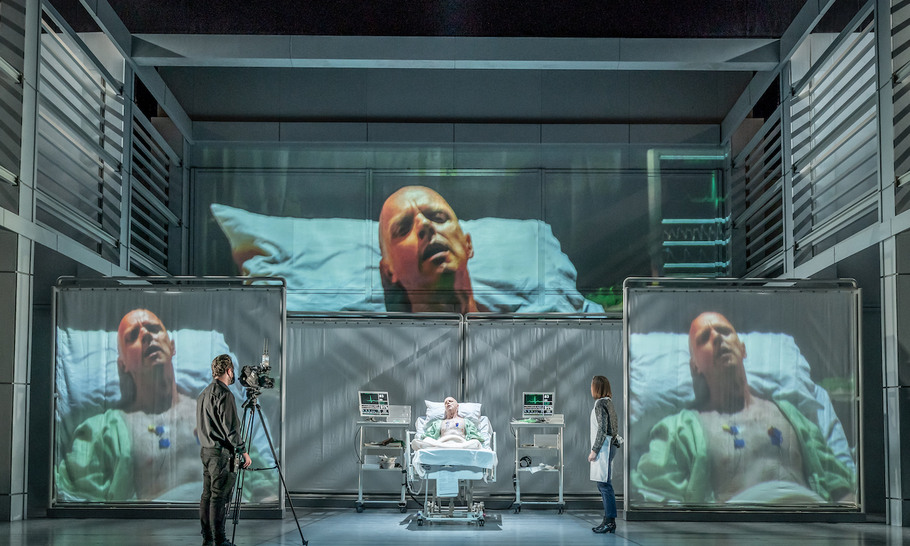 Chapeau to Grange Park Opera for putting on this unashamedly political work. After a sombre start with Alexander (Sasha) Litvinenko on his deathbed in hospital, we see him and his wife in happier times, until a sudden coup de théâtre. Black clad figures with guns appear in the auditorium, recalling the Chechen insurgents who stormed a Moscow theatre in October 2002.

This unexpected disturbance has two clear connections with Litvinenko. One is that he had been sent to Chechnya to wipe out the terrorist resistance, an experience that changed his loyalties after witnessing Russian atrocities. The other is that the gas the authorities pumped into the building, before storming it, remains unknown, unlike the Litvinenko poisoning in London using Polonium (named by its discoverer Marie Curie after her homeland, Poland). After entering the theatre, the Spetsnaz agents killed all the Chechen terrorists who carried out the attack— a fact Sasha’s wife, Marina, later alludes to when she points out they left no one to interrogate, and the only witness left from the FSB (successor to the KGB) died later in a car accident. Sasha was clearly disgusted by the things that had been done, and in an Austrian TV programme he claimed that two of the Chechen militants were working for the FSB.

In the second part of the opera, journalist Anna Politkovskaya, visits the Litvinenko’s house in Muswell Hill and tells of her own experiences in Chechnya. She is later murdered outside her Moscow apartment, on Putin’s birthday. We see, too, how Sasha had once presented a report to the head of the KBG, revealing who is corrupt and who is to be trusted, to adapt the new FSB to be a protector of the emerging Russian democracy — in hindsight, an error.

Chechnya, in the north Caucasus, was a watershed in how the regime dealt with dissenting nations in the Russian Federation. Fierce nationalism stems from a deep history — many linguists see the Chechen language as part of a larger family that once embraced Hurrian and Urartian in the Ancient Near East. The Hurrians were a powerful ethnic group during the Bronze Age, and the Urartians presided over a strong kingdom near Lake Van in eastern Anatolia during the Iron Age. If the Chechens are holdovers from these ancient peoples, their determined independence has resonances with the Basques in southwest Europe.

The quality of the singing was excellent, particularly Adrian Dwyer as the eponymous hero and Rebecca Bottone as his wife Marina, with fine contributions from everyone including counter-tenor James Laing, looking very much the part as the head of the KGB. The story-telling by librettist Kit Hesketh-Harvey (one half of the musical comedy duo Kit and the Widow) was wonderfully clear, and the music by highly successful fund manager, Anthony Bolton, was entirely apposite and engagingly eclectic, even quoting and modifying an excerpt from Tchaikovsky’s Eugene Onegin. It was performed in a recording under conductor Stephen Barlow, though one would hardly have known it was not live. It is truly remarkable that Bolton has managed to create this work, having purchased the opera rights to the book Death of a Dissident (by Alex Goldfarb and Marina Litvinenko) less than ten years ago.

Stephen Medcalf’s direction was excellent, with imaginative designs by Jamie Vartan, and my only reservation is with the very end of the opera. After we see Marina visiting her husband in hospital, promising to return next day, the monitors continue to register his heartbeat – until suddenly they show a horizontal line. That seemed a brilliant ending, but, in fact, Marina sings a eulogy that seemed rather too drawn out. The auditorium appeared as full as Covid restrictions allow, and those who were unable to see it must surely hope it will be revived in the near future.