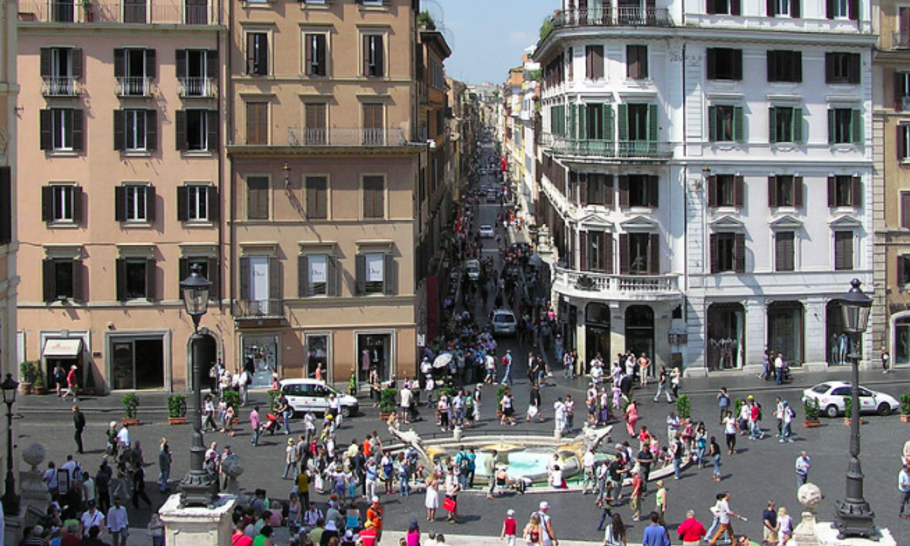 ROME—A short walk from Rome’s central station, Termini, lies Piazza Vittorio, a bustling public square that stands out from the rest of Rome. While millions upon millions of tourists flock every year to Rome to gaze on 2000 years of stunning monuments representing the Roman Empire and the Catholic Church, Piazza Vittorio is the 20th century face of Italy.

For decades, the square has been a hub for the migrant communities of the capital. Restaurants, market stalls and textile shops representing Chinese, South Asian and many more cultures paint a picture of multi-ethnic diversity and culture rarely seen elsewhere in Italy.

And whilst the statistics point to an overwhelming majority of Italy being white (91% in 2021), the political discourse, leveraged by the Right, lasers in on the dangers of immigration and of sullying the purity of Italy’s national identity.

This summer, Piazza Vittorio became a new battleground in which Rome, and by extension, Italy’s identity was contested. Giorgia Meloni, leader of Fratelli D’Italia (Brothers of Italy), the far-Right heirs of Mussolini’s fascist politics, used their municipal clout to install a food fair in the piazza, rechristening it “Piazza Italia”.

Where once the square was used to host various demonstrations organised by refugees and asylum seekers on political issues back in their home countries, now it was saturated with pizza, pasta and porchetta. Though perhaps trivial to an international audience, food has long been a tool to subtly leverage a sense of the Right’s political identity. It gives rise to “gastro-fascism”: using food to complain about the march of immigration: “First they take our jobs, then they turn our spaghetti into noodles and now they transform our ravioli into dumplings.”

Gastro-fascism is an old trick, invented by Jean Marie Le Pen’s supporters in France during the Mitterrand years, 1981-1995. His National Front organised public soup stands in cities, offering free soup to poor or hungry locals. They made sure there was plenty of sausage or ham in the soup, so no French Muslim (or Jew) could join the queue for free soup or stew. The Italian Brothers’ porchetta panini will be grabbed by white Italians, but not by Muslim refugees fleeing states like Libya, Iraq or Syria — destroyed as a result of the enthusiastic interventions of Tony Blair, David Cameron and Nicolas Sarkozy.

Ms Meloni is an unusual far-Rightist. She is a blonde, trim mother of one, the same age as Liz Truss. Unlike Britain’s would-be PM, Ms Meloni did not go to university and has had the same politics since her teenage days. She is an MEP, who chairs the European Conservatives and Reformists Party to which Britain’s Tories once belonged. Unlike many on the far-Right, she firmly supports NATO and the EU in their opposition to Putin. Like Marine Le Pen in France she wants to make her party respectable and capable of entering government. The European far-Right, which shared many of Nigel Farage’s and Boris Johnson’s views on the EU and celebrated Brexit in 2016, have now toned down their enthusiasm as voters across Europe see leaving the EU brings with it political problems, lower growth, and loss of international clout and influence.

Equally, installing a top European technocrat like Mario Draghi as Prime Minister of Italy, after his long stint as President of the European Central Bank, also does not guarantee political stability and a sense of direction. In the end politics matter and Draghi had never got his hands dirty with politics. He was installed by a heterogeneous coalition of parties – classic Italian centre-Left reformists in the Tony Blair tradition, the anti-immigrant northern identity party the Lega (League), which has called like the SNP for their part of Italy to separate from the rest of the country, and the populist Corbynite Five Star Movement, as well as other assorted non-rightist mini-parties.

This coalition is typical of the politics that now occupies most European political space. It is born out of the decline of traditional 20th dominant centre-Right or centre-Left parties and propelled by proportional representation, which allows a multiplicity of parties to arise and seek electoral support. But the resulting coalitions are shaky and can easily collapse as there is little to hold them together if policies turn out to be unpopular.

Draghi is a technocratic neo-liberal reformist. One small reform he tried to push through was to abolish the concessions to run beaches by renting sun loungers at high prices and control all food and drink during the lucrative summer season. He wanted to auction off these money-spinning concessions. It made sense in theory and anyone ripped off by the astronomic prices of sun-bathing on an Italian beach would sympathise. But thousands of small business owners have run protesting to their MPs at the Draghi reform.

He did succeed since taking over as PM early last year in two key areas. He sorted out a poor Covid vaccine roll-out. And he negotiated a handsome €200 billion package of grants of soft loans from Brussels, which his successor will inherit.

But Draghi could not hold together the coalition of vain, ambitious, wannabe prime ministers that provided him with a narrow parliamentary majority. Matteo Salvini, the anti-immigrant rightist nationalist who heads the League, looked with fear on the rise of the anti-immigrant Fratelli and their fashionable, fluent young female leader, Giorgia Meloni.

The Draghi coalition disintegrated and he resigned. Now Italy faces months of electioneering and cross-party arrangements. Silvio Berlusconi has resurfaced at the age of 85, offering his 161 Forza deputies to join the Fratelli, Lega, or Five Star Movement to form a new populist rightist coalition. In the end Italian politics always reverts to the lack of commanding political beliefs and governing parties able to deliver all the contradictory demands of today’s electorates.

The European People’s Party – the dominant centre-right EU political federation, is proclaiming the end of Italy’s Left alliance and Draghi as a shift back to the centre-Right in Europe after their losses in Germany and France. But the likely winners will be the far-Right, now focused on cultural and identity politics and not interested in solid economic governance in the manner of a Draghi. For Italians, fearful of how easily Girogia Meloni replaced the multi-ethnic vibrancy of Piazza Vittorio with the nationalist gastro-fascism of “Piazza Italia”, this may be just the beginning.