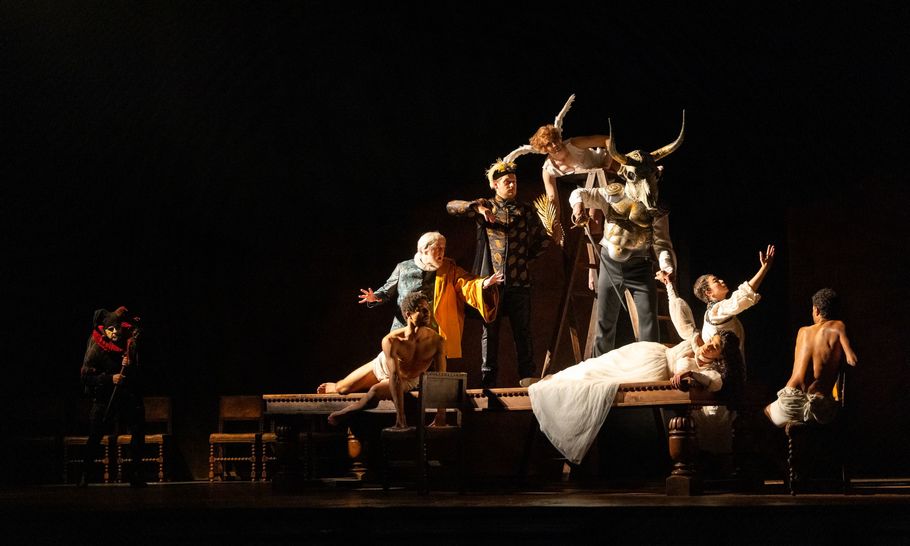 Fully reopening the Royal Opera House after the Covid lockdown is an event, and so was this excellent new production of Verdi’s Rigoletto by Oliver Mears. Mears is the Royal Opera’s Artistic Director and his first new production for the company since taking up his post in 2017 made a very welcome change from his hyperactive predecessor Kasper Holten, who couldn’t wait to do something startling. Here we see a deeper intelligence at work, and Oliver Mears hits the nail on the head.

Unlike the previous 1991 production by David McVicar, where the first scene of Act One displays outrageous sexual antics at the Duke’s court — which I always felt were perhaps more fun for the actors than the audience — this shows a context of sexual conquest and the exercise of power. Previous lovers appear carefully placed on stage near the start, moving in elegant unison, and Sir Antonio Pappano’s conducting exhibits more energy than I have heard in any other performance of Rigoletto. Remarkably, it’s been nearly 30 years since he last conducted this opera anywhere.

In Mears’s production the Duke is no mere libertine, but a powerful patron of the arts, well conveyed by paintings and a tableau at the start based on Caravaggio’s Martyrdom of St. Sebastian. Yet he is also a mafia-like figure, emphasised when he personally gouges out the eyes of Count Monterone — whose offence is to complain about the seduction and abandonment of his daughter, and lay a curse on both the Duke and his jester Rigoletto. After being blinded he is unceremoniously ejected through two large doors at the back of the stage, which have significance later, for example when they open in Act Two to reveal Rigoletto’s daughter Gilda, whom the courtiers have abducted, before the Duke leaves with her and shuts the doors behind him. Doors can hide and reveal, as when Rigoletto knocks on the door of the assassin Sparafucile’s house to collect the Duke’s dead body in a sack, only to find one of the nastiest surprises in all opera.

Vengeance is mine, saith the Lord, yet Rigoletto takes it on himself in his anger at the Duke, and the duet with Gilda that ends Act Two — he vowing vengeance, she asking forgiveness for the Duke — was sensational. After a tentative start, Carlos Álvarez made a terrific Rigoletto and Lisette Oropesa as Gilda was simply glorious, perhaps the finest coloratura soprano in the world today. The quartet was beautifully performed with the Armenian tenor Liparit Avetisyan as a determinedly callous Duke, albeit temporarily moved to softness by Gilda, on a bed upstairs with Ramona Zaharia as a sexually alluring Maddalena, as Rigoletto has brought his daughter to the street outside to witness reality. After Gilda has sacrificed herself and the devilishly dark Sparafucile of Brindley Sherratt has done the deed, the building moves to one side and as Rigoletto opens the sack containing the dying corpse of his daughter we see the river in the background, a timeless reminder of human folly.

A tremendous opening of the new season, with a full house that clearly appreciated being back and witnessing a superb performance.