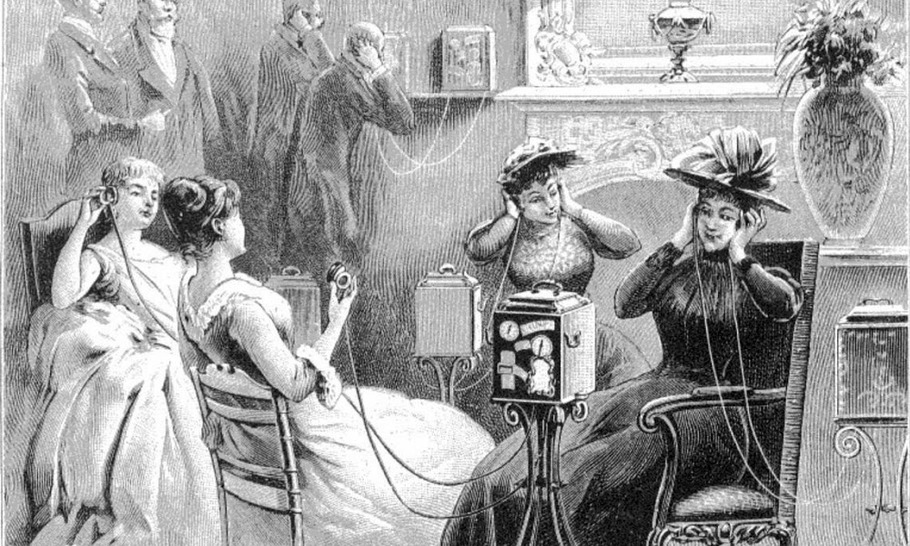 Surely, broadcasting news must come from a central point and be radiated out in all directions. To try to broadcast news by telephone is bound to lead to financial disaster. No subscriber would ever be willing (I am talking about the time before the advent of mobile phones) to rely on telephones to deliver news. Or would they?

As it happened, the idea of broadcasting appeared not long after telephone lines were set up in several European countries. Apparently the first one was in France where visitors to the 1881 World Exhibition could listen on telephones to an operatic performance straight from the Opera House some distance away. The Electrophone Company founded in London in 1893 also had some success in broadcasting plays and sermons, and attempts were made in some other European capitals as well. Most of them never really took off, but two of them survived a good 30 years and had to close business only later when radio broadcasting appeared.

There was only one telephone broadcasting system that was really successful, The Telefon Hirmondo. It operated in Budapest, and was the brainchild of Tivadar Puskas, the inventor of the telephone exchange. It started as a ‘news only’ service with the news repeated at the beginning of each hour, but by 1896 it had a full programme.

After the end of the performance general news and Stock Exchange reports were broadcast, followed by gypsy and military music until midnight. On Sunday afternoon there was a grand concert directly from the studio.

The Telefon Hirmondo was only one responsible for one lawsuit. An apparently criminal act was committed by a Mr Kapus, as reported in one of the newspapers. It was the usual problem that progress in technology brings in its wake new legal problems. He connected a wire to the Telefon Hirmondo line passing under his window and listened illicitly to the programme. The legal problems were connected partly with property rights (who owns the space under the window) and partly whether sound can be stolen. According to the newspaper report, the trial was adjourned because the judge wanted further legal advice. Regrettably, I could not find any further reports on Mr Kapus’s subsequent fate.

The Telefon Hirmondo employed about 150 people and by 1896 had over 6000 subscribers, a number which fluctuated a little (reaching a peak 7629 in 1899) but remained fairly steady until the beginning of the First World War. During the revolutions of 1918 and the subsequent occupation of Budapest by Romanian troops, the wires were mostly destroyed. Broadcasting restarted in 1924, and a year later the Telefon Hirmondo generously allowed the new upstart, Radio Hirmondo, to use their studio. Interestingly, the two media companies were never in competition. After a while they agreed to broadcast the same programme. The number of subscribers who preferred to listen to the telephone did actually increase to over 10000 during the ‘20s and ‘30s. The final demise of the Telefon Hirmondo came in 1944. It was not resurrected after the Second World War.

Why was the Telefon Hirmondo a success in Budapest and nowhere else? First of all its success was due to its inventor. He saw the need, offered an elegant technical solution and raised the necessary capital. Who were the subscribers? Those who were interested in the prices of stocks and shares were certainly among them. Who else? The Prime Minister and every member of his Cabinet, the mayor of Budapest, Mor Jokai, the doyen of Hungarian writers and everybody who was anybody. The Telephone Hirmondo also became a permanent feature in coffee houses, hospitals and hotels, lawyer’s offices, in the waiting rooms of doctors and dentists and was even available in the better barber shops.

So what were the reasons for its success? They were partly economic. It was a time of great economic progress. Budapest could boast both of an urbanised aristocracy and of a prosperous middle class. There was no shortage of people who could afford the subscription (36 korona, see advertisement) fee. The cultural reasons were perhaps just as important. The same people who could pay the subscription were also interested in listening to the opera. And indeed, in the publicity material the Opera was strongly emphasised. And finally, leisure time. The rat-race had not been invented yet-not in Hungary, anyway. The middle class had to work – but not too much. They had plenty of time for entertainment.