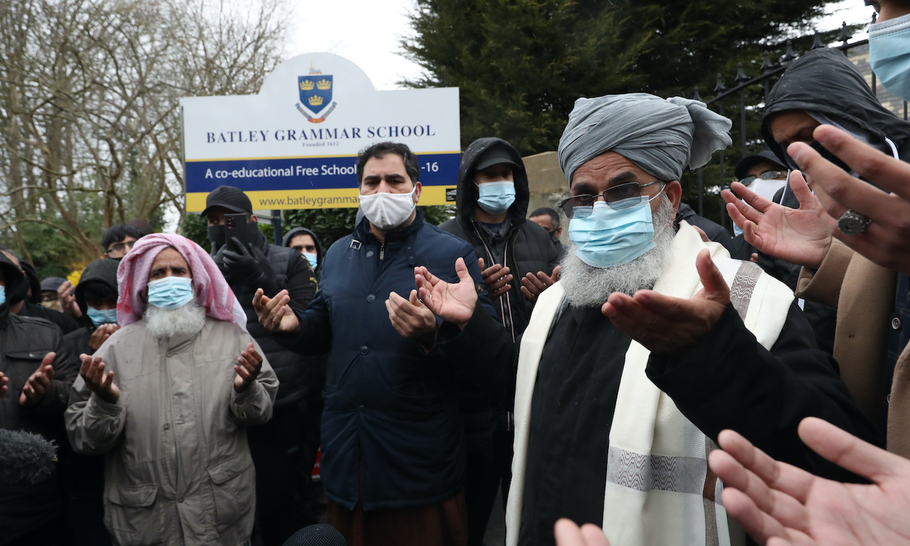 The Battle of Batley Grammar is about many things — the right to give or take offence, parents versus teachers, sharia law versus English common law. But on the central issue of freedom versus faith, the school has chosen the path of least resistance. The head has apologised “unequivocally” for the use of Mohammed cartoons and suspended the teacher who used them in a religious studies lesson. Whether this will placate the angry Muslims who protested outside the school yesterday is unclear, but in any case the confrontation has now escalated far beyond West Yorkshire.

The Education Secretary, Gavin Williamson, has condemned the protest as “completely unacceptable” and demanded that it be brought to an end. A spokesman for the Department for Education defended the school’s right to use “challenging or controversial” materials, “subject to their obligations to ensure political balance” and “the need to promote respect and tolerance between people of different faiths”. But the statement was clear that the parents had no right to ignore coronavirus restrictions in order to pressurise the school: “It is never acceptable to threaten or intimidate teachers.” Williamson is right to intervene and the Prime Minister should support his stand, but if his words are to mean anything there will have to be action too.

Meanwhile, Islamic organisations have lined up behind the protesters, who are demanding the sacking of the teacher and have named him online. The Muslim Council of Britain blamed the incident on Islamophobia and added: “We trust that the school will investigate and take the appropriate action needed.” Another group, the Ramadan Foundation, denounced the DfE’s statement which “just unnecessarily inflames the situation”. The Tory peer Baroness Warsi tweeted that the protesters should “calm down and go home”, while the suspended teacher “should not be named, nor hounded”. But the former minister did not call for his reinstatement; she also questioned whether “the issue of blasphemy could be taught in a better way”.

What Lady Warsi implies is that pupils should be taught about Islam without reference to the Charlie Hebdo cartoons and the massacres perpetrated by Islamists in France and elsewhere against anyone associated with them. They include last October’s beheading of Samuel Paty, a French schoolteacher, for the “offence” of showing his class the cartoons.

At the time of writing, nobody has been physically hurt in the Battle of Batley Grammar — yet. But that does not mean no harm has been done. The teacher at the centre of the conflict has had no public support from the head or staff at Batley. His future looks unimaginably grim. He has been named online by a local charity, The Purpose of Life, whose founder accused him of “sadistic behaviour”. (One might have thought that “sadistic” better described the violence unleashed in the name of Islam against those accused of blasphemy.) In the age of social media, it is impossible for a teacher targeted by religious fanatics to remain incognito in a small community. Even if he escapes unscathed, he will almost certainly have to leave his job and move far away. Whether his trade union will defend his rights better than his colleagues remains to be seen.

The damage to the school and all who teach there is less obvious but equally grave. The headmaster, Gary Kibble, was also threatened by the protesters. He saw no alternative but to cave in, apologising on behalf of the teacher as well as the school for the use of a “totally inappropriate resource”. He added: “We have withdrawn teaching on this part of the course and we are reviewing how we go forward with the support of all the communities represented in the school.”

In other words, the fundamentalist members of the Muslim community — who may not be representative of all the parents — now have a veto over anything that is taught at Batley Grammar. Three-quarters of the pupils are from ethnic minorities, mainly Muslim. The school is four centuries old and was originally a Christian foundation; despite its name it is non-selective. It proudly calls itself a free school, but its capitulation to intimidation is a defeat for learning and liberty. Batley Grammar will now be remembered as a shameful example of the renunciation of the freedom to teach and learn, the freedom of speech and expression.

The real victims of the Battle of Batley Grammar, ironically, are the next generation of Muslims. Regardless of how the battle plays out, few teachers will now take the risk of teaching Muslim pupils what they need to know in order to integrate and play a full part in British society. They need to understand that, while this is a tolerant society in which religious freedom is enshrined in law, this does not mean that they have a right not to be offended. There is a vital distinction between inciting hatred against Muslims, which is against the law, and satirising or criticising Islam, which is not. Nor is there a right to demand that what is taught in schools should be sharia-compliant. On the contrary: it is essential that Muslims, like everyone else, recognise their obligation to tolerate opinions or images that offend them. To educate these young people in an environment where they are never confronted with Western values is to confine them to a ghetto. Young British Muslims will be the losers — and so will the rest of us. To allow the protesters win the Battle of Batley Grammar is to perpetuate the problem.