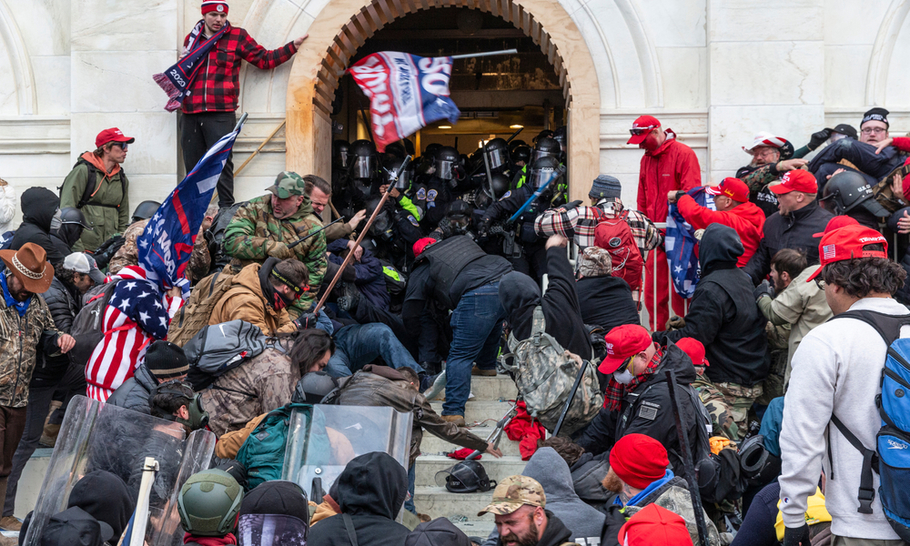 The storming of the United States Capitol last week was nothing short of a racist insurrection, ignited by Donald Trump, and carried out by a mob incensed that America is no longer a “white man’s country”– yet another battle in our never-ending civil war.

The South, which fought for white supremacy, technically surrendered at Appomattox in 1865. But that, it turns out, was merely a pause. I, like many Americans, optimistically hoped that perhaps the election of Barack Obama in 2008 signalled that the United States would finally become what we like to claim we are: a society dedicated to tolerance, equal opportunity, and equal justice under the law. That was naive: putting a Black man in the White House did not cure our 400-year-old disease. Instead, it perversely enabled millions of white folks to decide they are some kind of oppressed minority.

White grievance fuelled Donald Trump’s 2016 win. Last week Trump, an out and proud autocrat wannabe and white nationalist, stood before several thousand of his snarling, armed, racist fanboys and told them to “fight like hell”. Which they did – against their own country. Hundreds of domestic terrorists invaded the Capitol, smashing windows and looting congressional offices, vandalising the marble halls, damaging statues, defecating in the corridors, beating a police officer to death, and disrupting the democratic and constitutionally-mandated process of certifying Joe Biden as the next president.

They planted pipe bombs near the Republican and Democratic national headquarters. A guy from Alabama had a cooler of Molotov cocktails in Mason jars at the ready. Like vicious children taking over the primary school, one put his feet up on a desk in Speaker Nancy Pelosi’s office; others tried to pull pictures off the walls and chanted death threats to Vice President Mike Pence for refusing to stand up for “his” people and somehow declare Donald Trump president for another four years.

It was another battle in the forever war over who is a “real” American. Who gets to protest. Who gets to vote. What we saw Wednesday was not an American version of the sans-culottes storming the Bastille, rising up against oppressive elites. It was a coup attempt by the entitled, desperate to protect their hegemony from brown people, black people, immigrants and other undesirables.

While the South lost the war 156 years ago, white supremacist ideology hasn’t gone away. Indeed, it’s metastasised throughout the American body politic, as we see in Donald Trump’s barely-disguised racist rhetoric about “thugs” and the “destruction of the suburbs”. We see it in Republican efforts at voter suppression in North Carolina, Georgia, Wisconsin and Arizona, as well as the murders of black men by police in Minneapolis, Louisville, and Kinosha, Wisconsin.

The Capitol vandals blithely appropriated the old symbols, as if to signal to the country what they’re really about, erecting a gallows with a dangling noose outside the Capitol, sporting T-shirts proclaiming “January 6, 2021, MAGA Civil War”, and waving Confederate battle flags. And in case you don’t believe that white privilege is real, consider the Capitol police’s less-than-ferocious response to the people overrunning the building. While some cops resisted valiantly, trying to protect the elected representatives of the people, others accommodated the rioters. They retreated and let most of them just walk out of the building into the DC night; there’s even video of a cop and a rioter taking a selfie.

Imagine what would have happened if the insurgents sacking the temple of American democracy had been people of colour. In cities across the country – New York, Minneapolis, Philadelphia, Los Angeles – cops beat, kicked and handcuffed nonviolent marchers. Peaceful Black Lives Matter demonstrators were driven out of Lafayette Square in Washington DC by armed officers deploying tear gas – all so Trump could stage a photo op with an upside-down Bible.

Trump is, and always has been, President of White America, that neo-Confederacy of the mind that animates so many in the Republican Party. In his unhinged rant in front of the White House last Wednesday, he kept bringing up his executive order to “protect” monuments to slaveholders. He carried on about Wayne County in Michigan (where Detroit, a majority black city, is located) and raged about other urban areas where votes should not be counted because they weren’t cast by white people; and weren’t for him.

On either side of Trump, giant banners read “Save America March”. What are we saving America from, you ask? Not Caucasians with guns and pipe bombs; not his people. America – the real America, as Trump and his followers see it, the white America – must be rescued from those people: Black people. Brown people. Science-lovers. Book-readers. Elites. Journalists.

Rudy Giuliani, one of Trump’s warm-up acts, liked the look of that bunch of unmasked, “Don’t Tread on Me” flag-toting Caucasians so much he suggested the “question” of who actually won the presidential election be settled according to “trial by combat”: the Trumpist mob versus members of Congress. Donald Trump Jr warned the anti-Trumpists: “We’re coming for you.”

In their imagined neo-Confederacy, there’s simply no way in hell that Trump could have lost the presidential election, no way the Democrats took the Senate. So they holler about voter fraud, evidence be damned. You could see the stunned disbelief on the faces of Georgia Republican candidates Kelly Loeffler and David Perdue when they lost their Senatorial races to a Black preacher and a young Jewish documentary film producer, especially after the Trumpists resorted to some reliable white supremacist ploys. Loeffler ran Facebook ads in which Raphael Warnock’s skin was darkened – because we all know black Black people are extra scary. Perdue blessed a campaign spot with Jon Ossoff’s nose curiously enlarged.

It might have worked, save for Atlanta’s flowering of diversity, activist Stacey Abrams’ organising skills, and Donald Trump’s epic stupidity, assuring his white acolytes that the election was rigged. The state that gave us Gone with the Wind may have saved American democracy – at least in the short term.

Yet there’s not much to celebrate. Trump is unlikely to resign. Mike Pence is unlikely to rapidly grow a spine and invoke the 25th Amendment. Trump will be impeached, but probably not removed. Even though upwards of a hundred insurgents – many of them too dim to work out that posting selfies while committing a felony isn’t the smartest move – have been arrested, the painful fact remains that five people died because of their violence.

Meanwhile, although the man I hope is the last President of White America will be gone by then, sulking on a golf course somewhere, blaming everyone but himself, the white supremacists of the neo-Confederate militias are promising more of the same on 20 January – Inauguration Day.