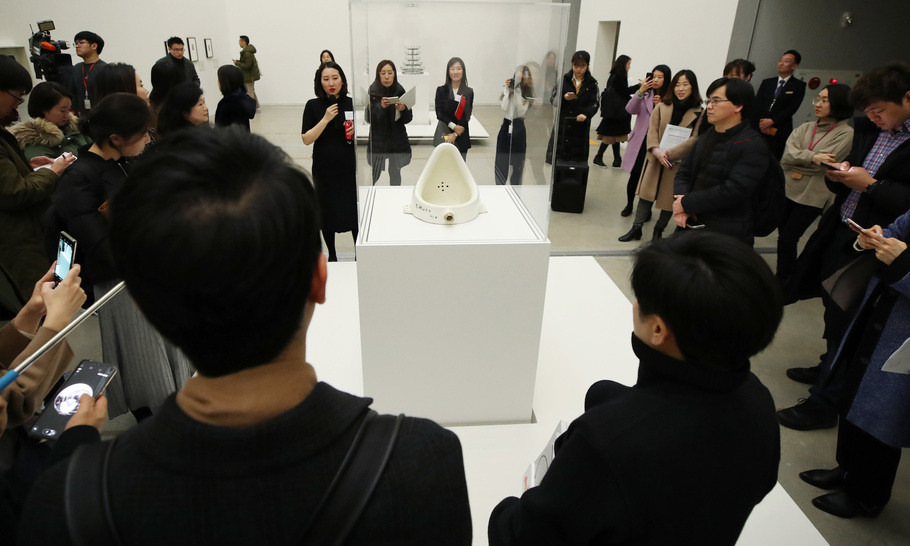 Marcel Duchamp was probably the most influential artist of the twentieth century. More so than Dali, more so even than Picasso. Virtually every modern artist is indebted to Duchamp and his liberation of art from the visual, in a way that eludes the grasp of his two fellow titans. I recall a German art professor once saying: “the dwarf Warhol stands on the shoulders of the giant Duchamp, while the dwarf Koons stands on the shoulders of  the dwarf Warhol”.

Everyone knows that Marcel Duchamp, apart from scandalising the art world with his urinal Fontaine, his love of chance, his moustachioed retouching of Leonardo’s Mona Lisa and his redefinition of the meaning of art with his readymades, also played chess. But how good was he?

“The most highly esteemed artist to play chess at Master level,” was the verdict of the Oxford Companion to Chess.

Two facts are popularly known about Marcel Duchamp and chess. One is that he gave up art for chess, and the other is that his first wife glued his chess pieces to his board in an act of desperation at the attention he was paying to them rather than to her.

This mythical aspect of Duchamp’s relationship with chess has tended to obscure the reality. That reality was sufficiently impressive for him to be awarded the Master Title by the French Chess Federation and for Duchamp to represent France in no fewer than four Chess Olympiads, (team championships).

Duchamp had been passionately attached to chess from his youth, as might be inferred from his paintings of 1910 and 1911, The Chessplayers and The Portrait of Chessplayers.

The renowned chess critic, Harry Golombek, in his Encyclopaedia of Chess, wrote of the latter work, that it gives a more complete picture of the process of chess-playing than many a stylised representational painting. Mark Kremer, writing in New In Chess International Magazine, added that the emphasis in these pictures is not on the idyllic nature of a game of chess, as seen by a possible observer but on its insular quality, its isolation vis-a-vis the outside world.

In 1923, Duchamp declared his crowning masterwork, The Large Glass, permanently unfinished and returned to France to make his passion for chess his second career. This was at the age of 36, a time when many contemporary chess Grandmasters are beginning to feel that they are gradually approaching near veteran status!

Although he was a late starter, Duchamp not only achieved the Master Title and represented France in the Olympiads, but also wrote one chess book, translated another, covered chess for Le Soir newspaper, became an official of the French Chess Federation and finally was active in the organisation of chess events and fund­raising for the game.

Indeed, one of his later art works was entitled “etant donnes” and Duchamp’s widow informed me that a linoleum chessboard is concealed beneath it. Not many people know that.

It was bad luck for Duchamp that his best-known game is a loss to Le Lionnais from Paris, 1932. This game happened to be annotated by the celebrated Franco-Polish Grandmaster, Xavielly Tartakower, in the authoritative Austrian magazine, Wiener Schachzeitung. This brought the game a certain prominence, but Le Lionnais himself was also not slow to trot it out, whenever he was asked about Duchamp and chess.

It should be added that Duchamp had drawn a game with Grandmaster Tartakower himself in 1928, and later, in the Chess Olympiad at Hamburg in 1930, he held the American World Championship contender, Frank Marshall, to a drawn result.

In 1929, Duchamp beat Koltanowsky, several times Belgian Champion and one-time world record holder for the greatest number of opponents faced in a blindfold simultaneous display. The tactical tricks Duchamp produced in that game, his evident love of paradoxical solutions, bowled over his distinguished opponent with extreme speed:

Much of the accepted wisdom about Duchamp as a chess player stems from that 1975 interview with Le Lionnais in Studio International. Le Lionnais stated:

“As for Duchamp’s style of play I saw no trace of a Dada or Anarchist style, though this is perfectly possible. To bring Dada ideas to chess one would have to be a chess genius rather than a Dada genius. In my opinion Nimzowitsch, a great chess player, was a dadaist before Dada.

“But Nimzowitsch knew nothing of Dada. He introduced an anticonformism of apparently stupid ideas, which won. For me that’s real Dada. I don’t see this Dada aspect in Duchamp’s style… Duchamp applied absolutely classic principles, he was strong on theory — he’d studied chess theory in books. He was very conformist which is an excellent way of playing. In chess, conformism is much better than anarchy unless you are Nimzowitsch, a genius. If one is Einstein, one says the opposite to Newton, of course; if one is Galileo, one contradicts everyone, but otherwise it’s safer to be a conformist.”

I suggest, however, that Le Lionnais was simply unaware of the degree to which Nimzowitsch, author of the influential book, My System, and a virtual candidate for the World Championship by 1927, had shaped Duchamp’s style. Even the opening of the oft-quoted game Duchamp lost with the white pieces to Le Lionnais (l c4 c5  2 Nc3 Nc6  3 g3 g6  4 Bg2 Bg7 5 d3 d6  6 e4) had been introduced by Nimzowitsch at Dresden, 1926.

Similar instances of Duchamp borrowing Nimzowitsch’s openings ideas proliferate throughout his games. See, for example, Duchamp’s win against Koltanowsky. One also detects philosophical resonances between Duchamp and Nimzowitsch in their attitudes to chess (in Nimzowitsch’s case) and to chess and art with Duchamp.

I have to declare insider knowledge here. While visiting his widow, Teeny Duchamp, in her villa at Fontainebleau outside Paris on one occasion, she invited me to inspect her chess cupboard. Out tumbled extracts from Nimzowitsch’s book Die Praxis meines Systems, neatly copied out in Duchamp’s own handwriting.

Take, also, the following statement by Duchamp: “Chess is a sport — a violent sport. This detracts from its most artistic connexions… If anything it is like a struggle”. And Nimzowitsch, apropos the international tournament at San Remo in 1930: “In its fascination and its rich variety chess is a mirror of the life struggle itself, but to a similar degree it is exhausting and full of pain”.

Further points of contact emerge from an examination of the reasons that may have attracted Duchamp to chess. Some writers have maintained that the symbol of the opposition of two hostile sides runs through Duchamp’s work, for example, the Bride’s domain and the Batchelors’ territory in The Large Glass.

The Times of June 14, 1966, speculated that Duchamp’s lifelong passion for chess might be thought an expression of his dislike for the trappings that cover purity of thought. Man Ray, Duchamp’s friend and designer of a chess set which Duchamp owned, said that chess is a game where the most intense activity leaves no trace. In essence, Duchamp and Nimzowitsch were both seeking criteria to determine the aesthetic, and they arrived at identical conclusions.

Kremer, writing in New In Chess, has said of Duchamp’s attraction to the game that he was interested in “cerebral art, in which there is an appeal to the viewer’s intelligence and imagination, more so than in the average sensuous offerings”.

To support this I now cite George Heard Hamilton’s, Inside the Green Box:

“… for Duchamp art is a mental act, a fact of consciousness. His life, a long one, and his career as a professional artist, so discon­certingly short, have been dedicated to the deliberate annihilation of what he calls ‘retinal painting’ that sort of art which appeals principally or only to the eye, which he believes began with Courbet and reached its greatest splendours and deceptions in our times with Picasso and Matisse.

“What he wanted, we might say, was not a painting of something, but painting as something, painting which should not only represent an object but be in itself an idea, even as the object represented might not be actual in the phenomenal sense, but rather a mental image. As he said in 1945 — I wanted to get away from the physical aspects of painting, I was interested in ideas — not merely in visual products. I wanted to put painting once again at the service of the mind.”

Chess is a marvelous field for this kind of operation, “for the beauty of a move in chess lies in the thought behind it, not in the move itself,” as Nimzowitsch wrote.

I never met Duchamp in person but I met Teeny, and got to know Duchamp’s close friend the avant garde composer John Cage. Cage used chess to create a relationship with Duchamp and it might be said that Cage’s controversial composition, four minutes thirty three seconds, an absolutely silent piece, represented the ultimate expression of thought over matter. By creating an entirely empty Thoughtspace, Cage invited the listener to fill that vacuum with infinite thoughts of one’s own.

Cage was not the only creative artist to have been impressed by Duchamp’s chess prowess. Many others began to incorporate chess in their works or even to design their own chess sets. It was as if chess conferred an intellectual imprimatur on their artistic endeavours. The Duchamp epigoni included Max Ernst, Meret Oppenheim, Man Ray, Alexander Calder, Francis Picabia and Paul Klee not to mention Surrealist Rene Clair in his short film Entr’acte (Paris 1924).

Duchamp’s most famous work was his 1917 piece Fontaine, an upside down urinal, an extreme example of his theory of the ready made. In 1991 I was invited with artist Barry Martin to design the opening ceremony for the world chess championship quarterfinals in Brussels, the sequence of matches that led to Nigel Short’s world title challenge against Kasparov in London two years later.

Barry Martin and I set out to create a homage to Duchamp. At the opening ceremony it is customary to draw lots for who plays black or white in the first game. Naturally we replicated la Fontaine and packed it with small, pristine porcelain black and white urinals which the grandmasters had to draw out as it were. Given Duchamp’s love of chance operations it might be said that “pot luck” determined the colours in round one of the championship!