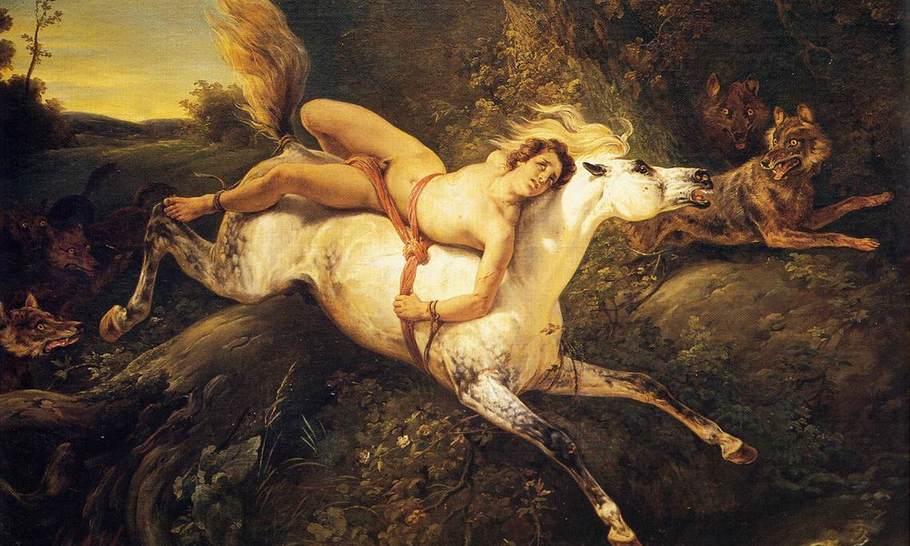 The war between Russia and the Ukraine is certainly rooted in the here and now, being fought with the latest technology in the ruins of once-prosperous cities. But behind the violence lie tales whose origins hail from myths of heroes buried in the fog of history. One such tale is that of Mazeppa, a Ukrainian hero (or anti-hero) whose exploits have been celebrated and demonised by not only poets, but painters and composers.

The only element of Mazeppa’s life on which all sides agree is that it was not uneventful. He came from a relatively humble background and rose to the highest office in his native Ukraine. At one point he even thought of turning Ukraine into a kingdom and placing himself on the throne. His story is one of high politics and illicit love. His personality and achievements have been a subject of bitter disagreement between Russians and Ukrainians ever since.

Mazeppa first achieved notoriety as a young page at the court of the King of Poland, when he committed the sin of seducing the wife of a Polish nobleman. He was caught. The punishment was swift and brutal. Mazeppa was tied naked to a wild horse which then carried him through forests dense and rivers wide back to the land of the Cossacks. His adventures caught the imagination of that romantic century. Many a painter, Delacroix among them, depicted the young man tied to a wild beast.  Poets, including Lord Byron, Victor Hugo and Alexander Pushkin, wrote epic poems about him. Tchaikovsky composed an opera about the story, while Franz Liszt named his Transcendental Etude No. 4 after Mazeppa.

Our hero was closely involved with Ukrainian politics at a crucial time. The second Northern War was fought between Russia’s Peter I and Sweden’s Charles XII. Peter wanted to make Russia a great power and he was indeed on the way to acquiring the epithet “the Great” himself. The Tsar thought the Cossacks were useful allies, but he found them altogether too independent and troublesome.

Mazeppa became controversial when, just before the Battle of Poltava, he changed sides. He fought with the Swedes against the Russians. Not unnaturally his personality and achievements have been a subject of bitter disagreement between Russians and Ukrainians ever since. The present-day battles between Ukraine and Russia are fought not only on land and sea and in the air but also in dusty University Libraries on the relative merits of various literary pieces.

Mazeppa was elected hetman (chief) of the Cossacks in 1687 and kept the job (a rare achievement among the unruly Cossacks) for 22 years. He had good relations with Peter at the beginning of his rule, but the friendship gradually withered away as Peter did his best to restrict the Cossacks’ autonomy and took away many of the privileges of their officers.

In 1708 Mazeppa made a secret alliance with Charles XII and a little later he openly switched sides. providing 5,000 Cossacks to the Swedish king to fight against Peter. Apparently 5,000 was not enough. The Swedes and their Cossack allies were defeated at Poltava. In fact, it was more than a defeat; it was a rout. King Charles and Mazeppa hardly escaped with their lives. All they could do was to seek protection in nearby Moldova,  which was at the time under Ottoman rule. At the start of Byron’s poem the King and Mazeppa are in a forest as darkness descends. They talk. The King eloquently praises Mazeppa’s valour in battle:

Of all our band,
Though firm of heart and strong of hand,
In skirmish, march, or forage, none
Can less have said or more have done
Than thee, Mazeppa!

The King cannot sleep. Mazeppa in order to help him fall asleep tells the King the story of how he was tied to a wild horse and how at the end he lost consciousness, and was found by a Cossack family

They found me senseless on the plain—
They bore me to the nearest hut—
Brought me into life again—
Me, one day o’er their realm to reign

Byron emphasised that the young man found tied to a horse became eventually hetman, leader of the Cossacks. Victor Hugo wrote in a similar vein.

The last line of his Mazeppa poem is
Il tombe et se releve roi.
He falls and rises as the King

Mazeppa did not quite become King but surely we can forgive the author of Les Miserables for a little exaggeration.

Now to Pushkin. He was well familiar with Byron’s poem. His avowed aim was to give a radically different account that, he claimed, was the true historical version. He gave to it the title ‘Poltava’. It is not clear whether he wrote it from conviction or to safeguard his position at the court just after he was allowed back to St.Petersburg. He was exiled for his earlier support of the Decembrists. It took great efforts from his friends and family to persuade Tsar Nicholas I to let him back to the court. Pushkin’s version is a celebration of the chivalry of Peter. He has all the power and glory. He is the nearest thing to God.

“He comes, his voice as if God had spoken,
His eyes aglow, his face fearsome
“Into battle,” he cries
His moves are swift,
A marvel he is,
A thunderstorm divine.”
(Translation by Ekaterina Shamonina and Laszlo Solymar)

Mazeppa, on the other hand is the villain of the piece, a traitor and a coward who runs away from the battle. Pushkin talks of his spite, deceitfulness and cunning. Not surprisingly, it is Pushkin’s version that holds sway in Russia.

The 300th anniversary of the battle of Poltava in 2009 was celebrated separately in Russia and in Ukraine. The festivities further confirmed that the controversy is as much alive today as it ever was.  The latest salvo in the ‘Mazeppa’ war was delivered by President Zelensky. On the 18th August 2022 he christened the first Milgem corvette of the Ukrainian Navy ‘Hetman Ivan Mazeppa’.