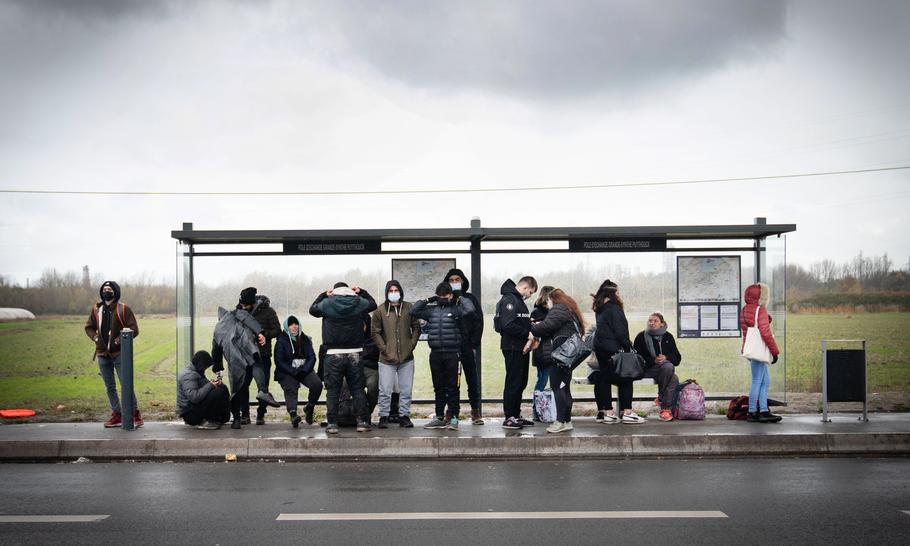 There was a curious moment on Radio 4’s Today programme on Thursday. Martha Kearney was interviewing Kevin Foster, the Minister for Safe and Legal Migration, about the deaths of almost thirty refugees in the English Channel the day before. He started to make a connection with the refugee crisis on the Polish border with Belarus and she promptly interrupted him, insisting that the real issue was about the deaths in the Channel.

She was wrong. The real issue has been the failure in the media’s coverage of the refugee crisis and their inability to make connections within Europe and across the world. Far more migrants and refugees have drowned in the Mediterranean, for example, than in the English Channel. Between 2014-21 more than 22,000 died trying to cross the Mediterranean, an average of almost 3,000 a year, compared to fewer than 300 asylum seekers who have died trying to cross the Channel to the UK, by vehicle, tunnel and over the water, in the past 20 years , according to research from the Institute of Race Relations.

British media coverage on the night 27 migrants drowned in the Channel was high on rhetoric and low on data or analysis. First, what are the causes of this migration crisis? I hardly saw any attempts at explanation at all. This is surprising, since it is widely known that the main causes are wars, persecution and human rights violations, climate change and economic hardship. In all the media coverage of COP26 there was surprisingly little on the connection between the environment and the number of refugees fleeing the effects of climate change.

Secondly, what is the scale of the global migration crisis? According to the UN High Commissioner for Refugees (UNHCR), in 2018 more than 70 million people had been forcibly displaced worldwide because of persecution, conflict, violence, or human rights violations. Of these, 6 million were in Europe, 11.6 million in South America and the Caribbean, 27 million in Africa and 28.5 million in Asia. Europe is not the centre of the international refugee crisis.

Fourth, why is there such a sense of crisis at the moment? The main reason is that in the last few years there has been a series of devastating conflicts, notably in Syria, Iraq and Afghanistan, generating enormous numbers of refugees. There has been much talk on the media about the number of Afghan refugees who were brought into Britain. What was rarely mentioned was how tiny these figures were compared to countries nearer Afghanistan. Pakistan took in 1.5 million Afghan refugees over the past twenty years and Iran took in almost 800,000. That is in addition to almost 6 million Afghan refugees who fled to Iran and Pakistan from the Soviet-Afghan war. Over the past twenty years, Germany took in 150,000 Afghan refugees, Austria 40,000 and France 30,000, compared to fewer than 10,000 who came to Britain.

The third major conflict which generated huge numbers of refugees was the Iraq war. Again, most fled to nearby countries: 95 per cent still live in the Middle East.

The contrast between the image produced by the British media, even the most balanced TV and newspaper coverage, and the statistics provided by the UNHRC and other international organisations is startling. Britain takes in far fewer migrants than other west and central European countries, especially Germany, Austria and France. Most refugees from Afghanistan, Syria and Iraq end up in being displaced within their own countries or flee to neighbouring countries, not Western Europe.

This matters because immigration has become such a huge political issue in Britain since Tony Blair’s premiership. It played a crucial role in Brexit, the rise of Ukip and the 2019 election. Successive Home Secretaries and Prime Ministers have promised (and failed) to “deal” with immigration. Few politicians have dared to try and put immigration figures into any kind of global context and none will dare say that the numbers who try and cross the Channel are far smaller than the numbers who try and cross the Mediterranean, cross from Turkey into Greece (by the end of 2015, 80 per cent of migrants coming into Europe came via Greece), or end up in camps in neighbouring countries in the Middle East or western Asia. If our TV news programmes and newspapers don’t try and offer calmer coverage, the migration crisis could lead to a political crisis.