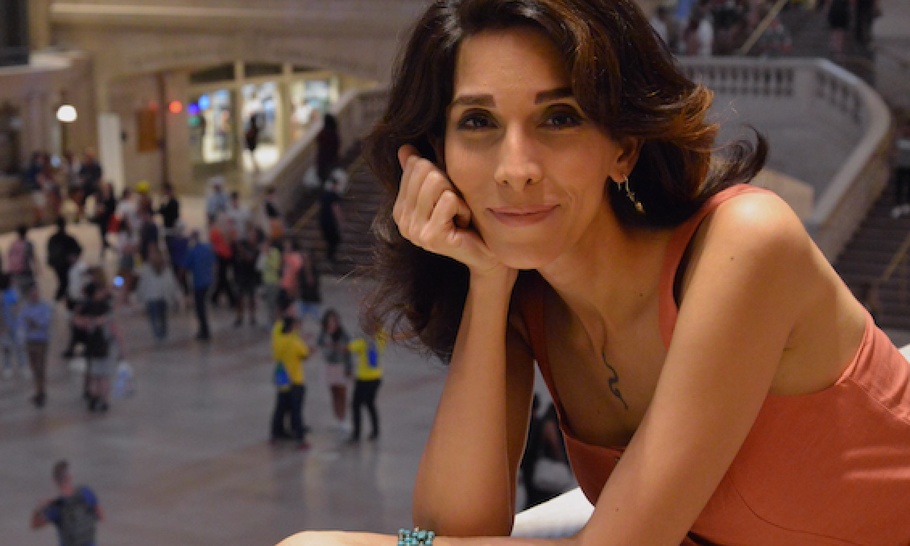 “I was quite religious when I was growing up. I even wanted to be a preacher at one point. In my early twenties, however, with constant thoughts of suicide, depression, and mixed feelings between faith and the struggle going on in my head, I decided to join the military to force myself to live in a world where I could learn to be a stronger man. At the age of 24, coming back from Afghanistan, I was a little less religious and decided life was short. I wanted to transition. I was discharged in 2009, at the age of 26, and started transitioning right away.” Erika Barker.

An award-winning photographer best known for his work in conflict zones has turned his lens on New York’s transgender community with stunning results.

In his new book, Trans New York: Photos and Stories of Transgender New Yorkers, Peter Bussian shares portraits of 50 people who identify as trans, genderqueer or gender nonbinary. It is a unique piece of work that not only offers a rare insight into the journey of transition, but one that celebrates the individual that emerges at the end — as well as the city that supported them throughout that journey.

Peter started shooting his book in August last year after a fit of “boredom” sent him off to the Pride parade. Only truly happy with one photo he took — which happened to be of a trans couple — he sent it to his publisher, who loved it. As they discussed the image, the idea of the book evolved and Peter got to work.

Having forged a career in humanitarian and international development roles — Peter lived and worked in Afghanistan for 15 years — he initially turned to Instagram for contacts. It was a slow burner due to trust issues, but once the results started coming in, the walls came down and the doors opened allowing him into a fascinating new world.

“Trans people are probably the most persecuted group of people in the US right now, as in many other countries, and tragically many of them die prematurely young. My viewpoint with the book was to help normalise the trans and non-binary experience in a way that didn’t demean them, fetishise them or show only the tragedies of their lives. I wanted to do a book that focused on them overcoming huge obstacles to lead rich and fulfilling lives.”

Despite having little prior knowledge of the transgender community, Peter said he found photographing them far easier than he could ever have anticipated.

“As a photographer of people, I feel it is my job to try and capture the soul of the person, to get beyond the surface and let their internal light shine through. I thought photographing trans people might be challenging in this regard since sometimes who they feel like they are on the inside is not necessarily who they look like on the outside, this is true of all people by the way.

“But capturing the physical representation of who they are inside was actually a lot easier than I thought, because most of the trans and gender nonconforming people I photographed are much more in tune with how they feel about themselves on the inside and also how they are perceived on the outside. In short, they are more self-aware than most people so photographing them was relatively easy. And it is amazing how the camera can reveal the mind of the person being photographed.”

Among the hugely inspiring individuals Peter photographed, he said there were a few in particular who had a profound effect on him, including a trans woman called Pooya (pictured) who came from Iran aged 19 and went on to become a hugely successful actress and advocate; Erika (quoted above), a former war photographer who is now a successful fashion and beauty photographer; and Grace, who spent four years in prison, studied law and now works as a leading trans advocate.

“This book has been one of the best and most interesting things I’ve done,” Peter said. “Everyone I photographed inspired me with their stories of strength and perseverance against great odds. They are people who have come from all over the world to pursue the same thing most people come to New York for — to actualise their potential and be free to be who they are.”

For Peter, finishing this book has not only had an impact on him professionally, but also personally. The father of five-year-old twin boys, he said it was interesting to note that they had not yet stuck to any particular gender role, instead choosing to engage in all the possibilities of their imaginations.

“One minute they’re super heroes, then they’re princesses, the next minute they’re short order cooks. Watching them has really made me question ‘what is gender’ in general.

“There is a huge generational leap that’s happened with gender, at least in the States, where younger people view gender very differently. Everyone is kind of defining themselves now and it’s no big deal, whereas my generation, unfortunately, is much more limited in their thinking even though gender really comes down to a few physical differences and hormones. Mostly, it’s about what people have in their minds. Sex and gender are more in the head than anywhere else.”

Peter Bussian is a New York based photographer, filmmaker and media consultant. His photographs have been widely published and exhibited in the US and abroad. His book Trans New York: Photos and Stories of Transgender New Yorkers (Apollo Publishers, www.apollopublishers.com) is released in May.