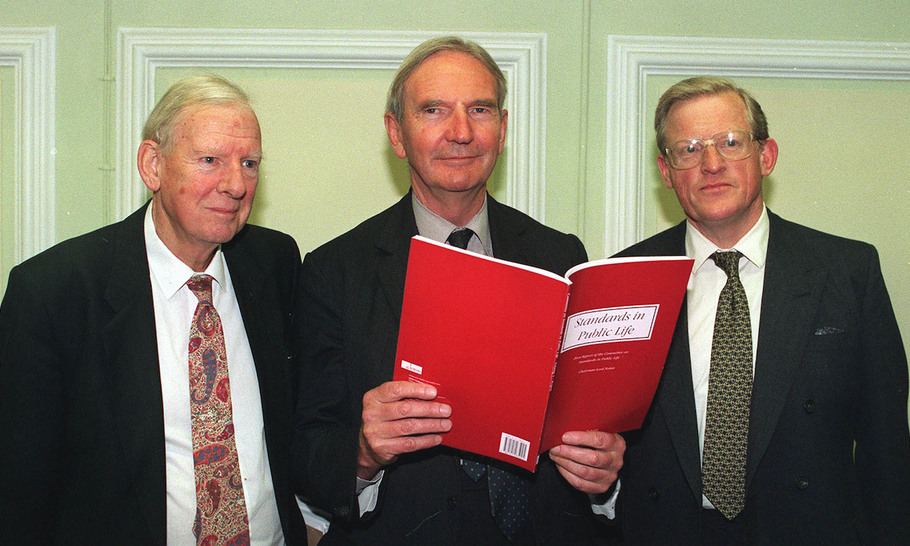 The Committee on Standards in Public Life (CSPL) has an open consultation on the future of standards regulation in the UK. Recently, the chair of the committee, Lord Evans, made a wide-ranging speech drawing attention to a series of worrying developments, from the process-free coronavirus procurements to the delays in publishing the report into the conduct of the Home Secretary. He asked if we were now in a “post-Nolan” age (under John Major, the Nolan Committee drew up principles for conduct in public office). The resignation of Boris Johnson’s independent adviser on standards, Sir Alex Allan, last week, following the Prime Minister’s failure to adopt Allan’s recommendation in respect of the Home Secretary is now set to be considered by the CSPL as part of its review.

The Nolan framework has been with us for 25 years. It is right that it should be reviewed. It is right that we should recognise where the principles still carry weight, informing the actions of public servants across the UK. But it is time to ensure that the Nolan machinery is strengthened, particularly when it comes to ethics in government.

It is unprecedented to have as Prime Minister someone who has been reprimanded by both the Advisory Committee on Business Appointments (ACOBA) and the Parliamentary Standards Commissioner. In July 2018, within a week of resigning as Foreign Secretary, Boris Johnson signed a contract with the Daily Telegraph to write a weekly column. He did not apply to ACOBA for permission until two weeks after signing the contract. The chair of ACOBA, Baroness Browning, wrote to Johnson on 8 August, saying: “The committee considers it unacceptable that you signed a contract with The Telegraph and your appointment was announced before you had sought and obtained advice from the Committee, as was incumbent upon you on leaving office under the Government’s Business Appointment Rules”. ACOBA refused to grant Johnson retrospective permission.

In December 2018 Johnson was told by the Commons Standards Committee to apologise for his ‘over‐casual’ failure to declare £52,000 worth of expenses in an incident which the Parliamentary Commissioner for Standards said was “a lack of attention to House requirements, rather than inadvertent error”.

Fast forward to 2020, and Prime Minister Johnson last week urged Conservative backbenchers to “form a square around the Prittster” as he rejected the advice of Sir Alex. The Prime Minister doesn’t respect rules or standards, for himself or for others in his Cabinet. The current system isn’t working. If respect and trust in government is to be restored, we need a new standards infrastructure.

First, there needs to be an Office of Government Ethics (OGE), which reports to Parliament rather than operating as an advisory body sponsored by the Cabinet Office, which is currently the position with ACOBA.

Second, the OGE needs to be properly staffed and resourced. It should take over the functions of ACOBA and the Prime Minister’s Independent Adviser on the Ministerial Code. It should have the power to investigate complaints against ministers, the Prime Minister, senior civil servants, and special advisers. Its conclusions should be made public. The Ministerial Code, Civil Service Code and Special Advisers’ Code should make it clear that if a finding of a serious breach of the Code is made by the OGE, then the Minister or official would be expected to resign.

Third, legislation should specify that certain breaches of the Code, such as the failure to take advice on appointments, should be regarded as an offence liable on conviction for a substantial fine under the Criminal Justice Act.

Fourth, there should be greater clarity around the question of misleading Parliament, particularly when it comes to commenting on the verdict of independent bodies such as the National Audit Office.

Currently there are no real sanctions available to ACOBA other than the threat of adverse publicity. The Public Administration and Constitutional Affairs Select Committee called it “toothless” in a report in 2017 and argued for it to be set up on a statutory basis.

The Ministerial Codes for the devolved administrations require departing ministers to comply with ACOBA’s rules. The First Ministers of Scotland and Wales have separately appointed independent advisers on their ministerial codes. Discussions should be taken forward with the devolved administrations as to whether they would be prepared to share sovereignty around a single Office of Government Ethics for the whole of the UK. There might be advantages to them in doing so, both in cost and reputational terms.

Informality has had its day. An Office of Government Ethics, set up on a statutory basis, with wide investigatory powers and legal sanctions for non-compliance, would be a powerful indication that 25 years after Nolan, standards in public life are being firmly asserted.