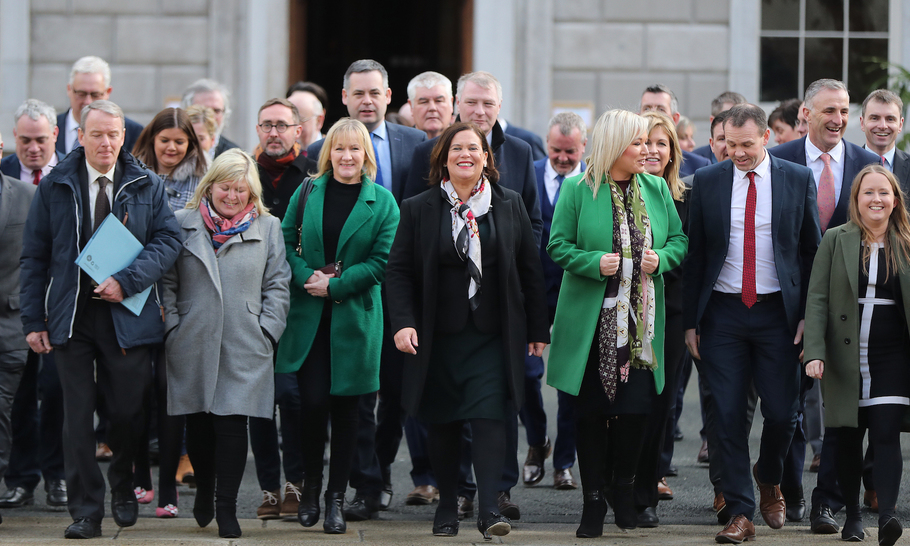 Irish politics has been in stasis since the recent general election in which Sinn Fein demolished Ireland’s political establishment. It secured the largest share of the popular vote while running far fewer candidates than its rivals. Its 37 seats are just one shy of Fianna Fail and ahead of the government party, Fine Gael.

What the outcome of the election means is that the process of cobbling together a new Irish government will be lengthy and at a time when the UK, its nearest neighbour and trading partner, is seeking to press ahead with the EU negotiations on post-Brexit trade arrangements. The form of any new government is problematic and, given the numbers, it will be fragile. Another general election cannot be ruled out, though no one wants it and a second vote would almost certainly give the same outcome.

The results of the election do not lend themselves to simplistic interpretations. This was no anti-austerity vote, though the roots of it are embedded in Ireland’s harsh post-crash economic experience. It is a very different kind of “populism” to that which has upended governments in other European countries. And while Sinn Fein projects itself as a stridently nationalist party, its leadership has tacked to the winds of European federalism — ironic for a party whose name translates as “Ourselves Alone”.

What is clear, however, is that the election was an epochal rejection of the established consensual political order in Ireland. This mirrors what has happened in a number of countries across the EU, including Germany, except that the dynamic in Ireland is very different.

Fine Gael, the once conservative and presently aggressively secular government party, misread the national mood. With all the resources of a seemingly robust economy available, it failed to deliver the “bread and butter” priorities of voters. Sinn Fein read the mood on the streets and the small towns only too well.

Fianna Fail, once the proud “Rule as of Right” custodian of national republicanism, were caught out by the militantly republican Sinn Fein. In fact, Sinn Fein and Independents flourished while the establishment, including the Irish Labour Party — the opportunistic remnant of a once proud socialist tradition — were humiliated. The exception was the performance of new party, Aontu, who leadership split with Sinn Fein on the issue of abortion and whose two per cent base belies its appeal and the national attention it has received. Not so long ago, Sinn Fein too had two per cent popular support. Importantly, the platform on which Aontu stood — a pro-family social economy — resonates strongly with the Unionist tradition in Northern Ireland. Hold on to that thought for a moment.

The Irish political landscape is now littered with broken moulds, shattered myths and bruised egos. It is infused with a kind of unease. Sinn Fein was the political wing of the Provisional IRA and maintains links with those who still reside in the “shadowlands”. In fact, it was precisely to prevent a return to violence, including a re-animated IRA, that EU/UK customs checks were moved offshore and into the Irish Sea, to the dismay of Unionists.

It’s not just the political establishment that is spooked. The markets —especially banks and rent-seeking institutional property investors — were also unnerved by the result. Many would argue, as Sinn Fein does, that the banks, empowered by the old political establishment, were getting their comeuppance for their self-centred agenda. They were the epicentre of Ireland’s economic crash and the country is still, albeit indirectly, hurting from that catastrophe, the subsequent bailout and erosion of Ireland’s sovereignty.

Ireland has, since independence, been governed, more or less in rotation, by Fianna Fail, which shoved Ireland over an economic cliff and Fine Gael which presided over the resulting austerity. Between them, they failed to deliver sufficient affordable homes, presided over rents which are at punitive levels for young couples and students, and allowed financial opportunists to buy failed mortgages and cheap property. This infuriated voters who turned to the seductively radical policies of Sinn Fein, even though they didn’t quite grasp the political and economic price tag of its agenda.

There’s the rub. The reluctance of both mainstream parties, even within the framework of the Good Friday Agreement, to enter a coalition with Sinn Fein is more than a little disingenuous. Or, put it this way — Ireland’s moral high ground is a bit crowded. The origins of both parties were intertwined in a vicious civil war. Michael Collins, the most illustrious son of Fine Gael’s political lineage, was assassinated by Republicans. Bad, and tragic, things happened.

The uncomfortable reality is that Sinn Fein now has a democratic mandate to do what Fine Gael and Fianna Fail, individually and collectively, failed to do; namely, respond to stresses in Ireland’s economy. These are caused by a lack of affordable housing, an overstretched health system and rural decline.

Exit polls showed voters had little regard for the Brexit “Deal” — supposedly Fine Gael’s trump card. Moreover, the aggressively secular “woke” Fine Gael fell flat on its face. The Taoiseach Leo Varadkar — who entered Parliament on a pro-life promise — pushed liberal abortion legislation through Parliament, ignoring the sensitivities of many voters, not only in the Republic, but also in Northern Ireland. Varadkar barely scraped home in his constituency; many of his political allies and activists, who had led the process were dumped by voters. More tellingly, perhaps, all of the TD’s who had opposed the government’s abortion legislation —facing the wrath of Party bosses — held their seats.

Here’s the point: in classic Marxist fashion, Sinn Fein largely stood to one side in the Republic while the established parties haemorrhaged large numbers of supporters. Most of these people were disaffected by a failure of the establishment to focus on what families talk about in their kitchen, as opposed to what ideologists push on social media.

Sinn Fein are determined long-term strategists, and the other parties face a tough choice as they assess how to engage with the party. Professor Antony Coughlin, formerly of Trinity College Dublin, and a founding member of the Northern Ireland’s Civil Rights Association, has long made the point that Republican Sinn Fein essentially hijacked a movement that had emerged before they were even formed and from which they claim political legitimacy.

They are chameleons and master strategists, hard men who, notwithstanding their now jubilant leader, will be driven by what’s in their revolutionary DNA. But, it cannot be denied that the party has hard-working and committed activists who know what’s happening on the streets.

The party’s objective is a border poll, which would, of course, require the consent of the Unionist majority in Northern Ireland. Sinn Fein’s narrative is already unfolding, thanks to the epic failure of the Irish political establishment and their radicalisation of young voters. In classic Marxist terms, the once-radical Irish establishment has now been superseded by an even more secular, and even more ruthless, Sinn Fein.

There is one way to cut through the treacherous fog that now pervades the Irish moral and political landscape. Mainstream parties must recover their foundational political values and reach out to the Unionist tradition in Northern Ireland. This will offer the people, North and South, an alternative to a prospective Marxist hegemony across the island.