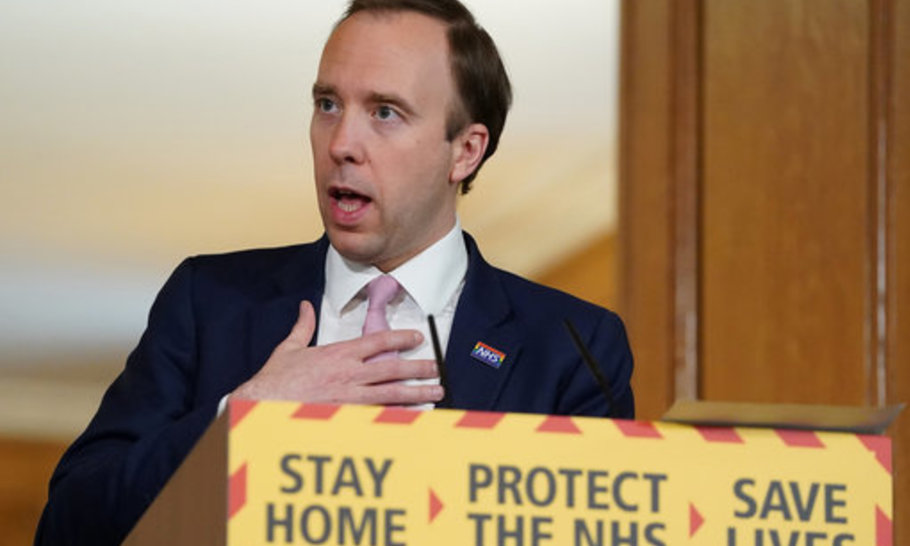 I’ll start by being nice. Of the various ministers fielded by the government to front their daily briefings, Matt Hancock has been about the best. This is admittedly a field which includes Alok Sharma, Gavin Williamson, Priti Patel and Robert Jenrick so we are not exactly talking competing with Messi and Ronaldo for the Coronacomms Ballon d’Or here.

However, for all the social media banter about “Hancock’s half hour”, and for occasional howlers like handing a question on dead nurses and doctors to the chief nurse, he seems more on top of detail than his colleagues, manages to mix seriousness and optimism in a way his boss Boris Johnson has never mastered, and has a tad more empathy than Dominic Raab.

But — you knew there was a “but” didn’t you? — he always gives the impression that he is expecting a round of applause and a pat on the back for all his straining of sinews and working night and day around the clock and moving heaven and earth to leave no stone unturned to carry out the Herculean challenge of catching up with the many countries that took this crisis more seriously at the start than we did, and therefore got ahead on testing, tracing, PPE-ing, ventilating and pretty much every -ing you can think of. Apart from wanting thanks.

I remind Mr Hancock and the Number 10 spin team of something Bill Clinton once said when I was groaning on about how the media treated me and my old boss Tony Blair towards the end of our second term when the honeymoon was well and truly over. “There is no blue ribbon for these jobs,” said a man who knew a thing or two about being kicked around by the media and his opponents. “The job is the blue ribbon.”

Matt Hancock was in full “clap me, clap me, pat me, pat me” mode on Friday as he announced that he had more than met (sic, I will return to this) his target of testing 100,000 daily by the end of April. He strung out the moment like the worst kind of awards acceptance speech.

The problem is that in straining so many sinews to get over the target, he strained credulity too. So, by the end of the day, as the figures unravelled under not very intense scrutiny, not just Hancock but the entirety of government and their many media outriders and social media bots and sock puppets seemed to join in complaints that the standing ovation was not going on long enough, and the showering of blue ribbons was a mild shower not the storm of adulation that they had marked down on the grid as the topline for the day.

BBC headlines like “the government has met its bold target of 100,000 tests a day” just were not good enough. Why could they not start with bulletin with “hallelujah” from Huw Edwards, or “thanks be to King Boris for he hath returned and the testing it hath grown”?

Sky and Channel 4 were even worse. Ok, they said the testing pledge had been met. But they also said almost 800 people had died on Friday, and they dared to mention fairly high up that the 122,347 figure announced by Mr Hancock at the awards ceremony included tests that had not yet been done. Other cynics took to social media to republish a letter that had gone out to Tory party members urging them to get online and order as many tests as they could afford in these straitened times.

Why, there were even some who suggested that despite the Hallelujah moment, we were still lagging behind countries like South Korea and Germany, not to mention, er, Albania and Greece.

George Osborne joined in the chorus of complaints that Matt’s Oscar moment was not being greeted with the fawning adulation he clearly so wanted. “Let’s imagine the howls, outcry and the calls for resignation if my friend Matt Hancock hadn’t hit 100,000 tests target — and now listen to the sullen silence as he succeeds,” said Mr Austerity.

Sullen silence? One, he shouted it from the rooftops when a bit of show not tell might have been better advised. Two, most of the broadcasters led on it despite the death toll going up again and the continuing problems over PPE, and of course most of yesterday’s papers, several of which might as well be edited in Tory HQ, hung blue ribbons all over the shop for his pal Matt.

As we are in “let’s imagine” mode, George, let’s imagine the government I worked for had still been in power, and the Labour health secretary had staked his future on a figure, and then to meet it had included many thousands of tests that may or may not have been done subject to the vagaries of the post, and the commitment of those who had ordered them.

I will tell you …

BONG: Success, claims Health Secretary Alan Milburn. But the figures show the government has included thousands of tests yet to be carried out.

BONG: Tory MPs are calling on Tony Blair to make a statement to Parliament as the controversy deepens. We have the latest.

By the morning, encouraged by front page headlines like “More spin, more lies, how low can they sink?” from the Mail; “Labour lies over failed tests” (Express); “Postie testing fiasco” (Sun) and “Double counting row floors Milburn testing claim” (Telegraph), the Today programme news bulletin would have started as follows:

“Downing Street has insisted the Health Secretary has Tony Blair’s full confidence despite admitting thousands of tests that were not done were included in the claims a controversial target was surpassed.”

Iain Duncan Smith or David Davis — for it is always they — would have had the 7:30 am slot to demand a Blair statement and to trot out past examples of so-called spin, and the 8:10 am slot would have gone to Jack Cunningham or Margaret Beckett to defend the government.

By World at One time, the lead story would be the news that the Public Administration Committee was summoning the government’s director of communications and strategy to give evidence after he admitted at the morning briefing having signed off Milburn’s statement.

By the afternoon, this being a government whose Prime Minister regularly attended the Commons, Mr Blair’s defence of Mr Milburn at the Despatch Box would be leading the news. “Blair forced to defend testing double counting” would make the last edition of the paper mow edited by Hancock cheerleader George Osborne.

Then the PM programme would take the story on, Labour backbenchers Jeremy Corbyn and Diane Abbott being interviewed and backing the Tory call for heads to roll.

The early evening news would reflect the growing meltdown with not just two bongs, but three.

By Channel 4 News time, there is a chance the director of communications and strategy would have had enough, to do a rare interview and this allowed the channel to say he had “stormed into the studio.”

Newsnight would lead with an interview with Margaret Thatcher’s press secretary Bernard Ingham, who would say “it wouldn’t have ‘appened in mah day’.” Then reports of the families of people who had died saying it was all spin and their son/daughter/father/mother would have lived if the government had got its act together earlier. And then there would be a report from Berlin in which a German scientist would explain why and how they had managed to do so many more tests than the leader of the European death league table, the UK. Finally Jeremy Paxman would show tomorrow’s front pages, wall-to-wall talk of scandal, fiasco, spin and lies.

So count yourself lucky Mr Hancock. The feral beast of which Tony Blair spoke is no more.

In truth, the Health Secretary did not need to overdo the numbers in the way he did. His argument that setting bold goals is a good way of galvanising the system is right. And I for one would have said fair play if he had said ok, we did not quite make the 100k today but we got damned close by forcing the pace in the way we did and we will be there in a matter of days.

Instead by yet again over-promising to under-deliver, and over-claiming the scale of success, he left himself open to criticism he could frankly have avoided.

But to him and his colleagues, I say they do not know how lucky they are to have such a tame media. Stop whining. Don’t worry about blue ribbons. Do the job.