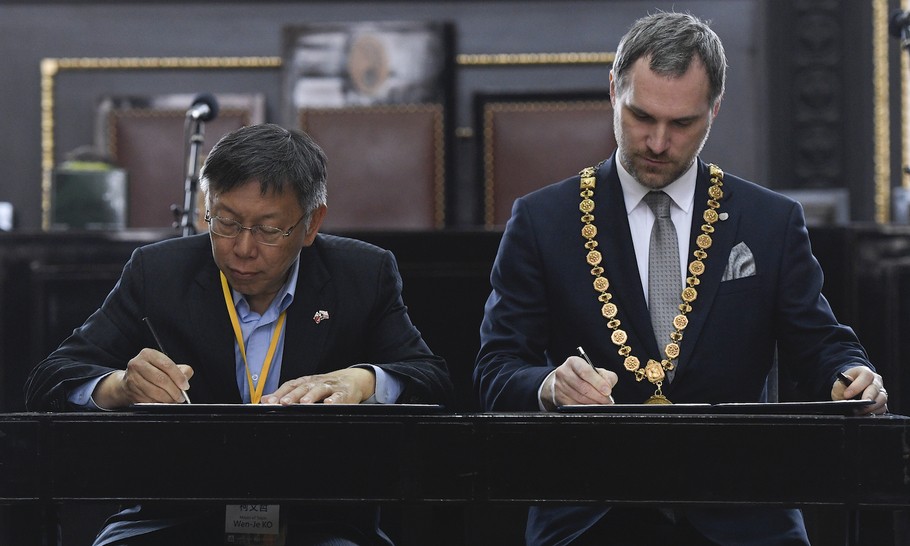 When, in late 2018, Zdenek Hrib was named the new mayor of Prague, few predicted that he would refashion Czech politics, and certainly not over the rather trivial issue of who is the capital city’s international sister city. As a politician from the anti-establishment Pirate Party, the third largest in the Czech Republic, Hrib had long been critical of China’s human rights record. After he became mayor, Tibetan flags flew across the capital, while he rebuked the national government for excluding Taiwanese diplomats from official meetings.

Then, in October, Hrib cancelled Prague’s sister city agreement with Beijing, ostensibly because of China’s insistence that the three-year-old deal includes references to the “one-China policy,” which states that Taiwan is part of Chinese territory, not an independent state. In retaliation, Beijing prevented some Czech organisations from entering China, including Prague’s Philharmonic Orchestra. Also, it appears, Beijing tried to sway public opinion covertly. The Czech-Chinese Centre at the Charles University, one of Europe’s oldest, had to close in November after staff received undisclosed payments from the Chinese embassy.

Hrib was unperturbed. Last month he signed a new deal (pictured) to make Taipei, Taiwan’s capital, Prague’s new sister city. According to Hrib, he is simply living up to the ideals of democracy, human rights and international solidarity that inspired the Velvet Revolution, the peaceful protests of 1989 that brought down the communist regime of what was then Czechoslovakia.

Amid this, the question of Chinese influence has become a minor cultural war. Some academics are hounded as being too pro-China, while newspapers have grown increasingly anti-China, even rebuking the country’s most famous ice hockey player, Jaromir Jagr, for becoming the unofficial “China Ice Hockey Ambassador”. A popular tabloid last month dedicated its first three pages to lambasting China’s influence on the country’s elites, who, many say, are the only people to have prospered from closer dealings with Beijing.

Events took an interesting turn recently when President Milos Zeman — who has been the loudest supporter of improved relations with Beijing — announced that he wouldn’t be attending this year’s gathering of leaders from China and 17 European states. According to Zeman, this is a protest over the minimal investments China has made into his country. His timing was suspect and, indeed, rather late in the day.

Some 57 per cent of Czechs surveyed by Pew Research in a study last year held unfavourable views of China, by far the most negative of all the Central and Eastern European countries surveyed, and on par with the generally anti-China views of Western Europeans. Only Swedes and the French hold more negative opinions of China than Czechs, according to the survey.

Last year, a report by the Prague-based Association for International Affairs argued that debate over China “seems to be returning to where it began after 1989 — to seeing China as a morally bad, authoritarian, dangerous actor whose policies and initiatives need to be opposed, rather than welcomed”.

This anti-China sentiment appears to have three motivating factors: The first is a genuine sense of disappointment about China’s minimal investment. Between 2005 and 2019, the Czech Republic received just $960 million in investment from China, compared to $4.8 billion for Hungary and $25.5 billion for Italy, according to the American Enterprise Institute’s China Global Investment Tracker.

Second, it has become a form of protest opinion amongst Czechs who feel Chinese investment and business dealings have further corrupted an already corrupt elite, while providing nothing for the public. The third reason is that the China question has now become intractably politicised, dividing the establishment and anti-establishment parties. Zeman’s decision last month to publicly rebuff China was, most probably, the result of him sensing a change in the political wind and shifting his position accordingly.

Nothing suggests clashes over China’s influence should remain confined to the Czech Republic. Another Pew Research survey from 2018, found only nine per cent of Hungarians and six per cent of Poles thought that China becoming the world’s leading power would be better for the world, the two lowest scores of the ten European countries surveyed.

Cassandra-types who say China will soon take over global affairs with its own tyrannical world order should look at Beijing’s frequently woeful foreign policy. In almost every country where China has built some influence there has been a public backlash, often forcing governments, even undemocratic ones, to tone down dealings with Beijing.

Anti-China feeling is growing in countries like Cambodia, Sri Lanka, Malaysia and Kazakhstan, where locals have witnessed the downsides of Chinese investment. Cambodians, for instance, are frustrated by how Chinese investment has reshaped their cities and driven up the cost of living. In Malaysia, anti-China sentiment was one reason an opposition coalition won the 2018 general election, the first change of government in the country’s history.

The Czech Republic is slightly different, though it does typify debates about Chinese influence in Europe. Here, China is criticised by some as having too much influence and, at the same time, by others as having too little influence. The Janus-faced nature of this criticism points to Beijing’s inability to affect the national conversation and win over more than just elite politicians. And its attempts to correct this covertly after the horse had already bolted, points to naivety, and perhaps even hubris, in Beijing’s approach to foreign relations.

If Beijing had been more sensible and experienced, perhaps, it wouldn’t have engaged with the Prague mayor’s diatribe — thus denying him the oxygen of publicity. Instead it might have quietly pumped a few hundred million euros into the economy to appease the national government. It did neither. So, instead, what essentially began as a symbolic protest by a rather powerless mayor has become a national political mêlée that seemingly knows no end.