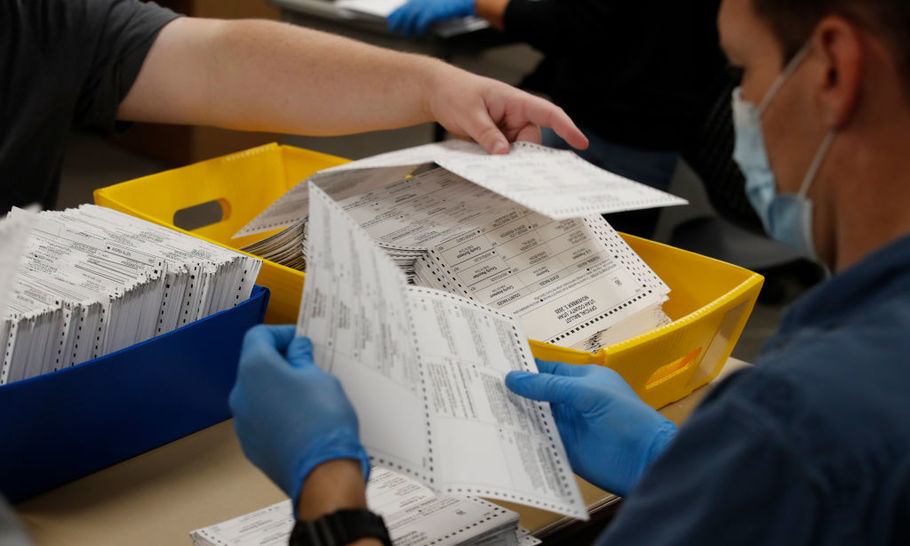 Blessed are the ballot counters. For they are the true defenders of democracy. Irrespective of political allegiance, dogged, quietly, patiently they are the heroes of this extraordinary US presidential election.

The race is approaching its dramatic climax. President Trump rages against the dying light. He will not go quietly. But power is slipping away from him and his clan. He knows it and so do his supporters. In the districts where he is losing they hammer on the closed doors of the counting halls shouting “Stop the count”. Where he is winning the chant is: “Count every vote”.

As the noise of battle swirls around them, across the nation ordinary citizens and local officials, Democrats, Republicans and agnostics, carry on counting the ballots that will hand the keys to the White House to the next president of the US. It’s the most magnificent, monotonous, mesmerising spectacle in the free world.

There are around 7,000 local election boards across America give or take. These are composed of citizens from their own communities. Their job, put simply, is to count the votes, every vote, and preserve the integrity of the election process. They are the nonpartisan guardians of democracy.

In the hair’s-breadth state of Georgia, the official supervising the count in Clayton County, a suburb of Atlanta, appears on CNN at 3am, a little the worse for wear. They have been counting night and day without pause. She has at her fingertips the number of votes counted, the numbers remaining and how many of those are postal ballots. She is unfazed by the gathering hysteria and conspiracy theories. “We’re getting on with the job”. She says what matters is the health of American democracy.

This election is likely to see the largest turnout in over 100 years. By early on election day, nearly 100 million people had already voted, about 70 per cent of the electorate. Oddly the highest ever turnout of eligible voters in a US presidential was in 1876 (82.6 per cent) when Republican Rutherford Hayes defeated Democrat Samuel Tilden. This was partly due to a very high turnout of recently-freed slaves.

But those rates fell with the end of Reconstruction, as federal officials withdrew from Southern states and Jim Crow laws barred newly enfranchised Black voters. By 1920, rates fell to less than 50 per cent. Turnout rates continued to fluctuate throughout the mid-20th century as women gained the right to vote, Congress passed the 1965 Voting Rights Act and the national voting age became 18 (the voting age had been 21 in most states).

The Trump election machine in anticipation of a tight finish has gerrymandered shamelessly. Hundreds of thousands of voters have been quietly disenfranchised, polling stations have been moved so they are less accessible to poorer Democratic districts.

Despite this, the electoral machine is holding up. The process is painstaking. One of the most striking developments is the huge increase in postal ballots. This has proved crucial as Covid-19 sweeps across the US. The Vote at Home Institute believes that by 2022 less than 50 per cent of ballots will be cast in person, a trend that favours Democratic candidates. Postal ballots may well propel Biden to the presidency

Trump has seized on this to make the wholly unfounded claim that it opens the door to massive electoral fraud. In August Trump sought to sabotage voting by mail by refusing to approve $25bn in emergency funding for the United States Postal Service. The cash-strapped federal agency is the conduit for citizens who want to vote by mail.

Rarely has bureaucracy been so fascinating and so important. For once a worm’s eye view is more interesting and more important than the big picture. In Utah (a Trump hold) official Ricky Hatch explained how it works: “The first thing we do is we make sure that that a voter is registered and that they’ve only voted once and that the ballot belongs to them. Next we look at their signature to make sure it matches the signature we have on file. All these pre-checks are done with the envelope closed. We can’t tell by looking at the envelope how they voted.

“When we slice open the envelope, we do it in a way where you can’t see the voter’s signature and the ballot at the same time. This is done around a table with multiple poll workers, election judges and observers. We unfold the ballot looking for tears, blood, sticky stuff that might get stuck in the machines. Then we place the ballots in batches. We then scan them.

“We pull the memory stick out of the machine and walk it over to our tabulation server. This is a locked separate area. Only a couple of people have access to. All this on CCTV.”

In the crucial state of Wisconsin a bleary-eyed official who has been up for 14 hours said: “We really value transparency. We want voters to know exactly what’s happening behind the scenes. We even have a podcast series about everything that’s taking place. If they don’t trust the result they won’t trust the president.”

It looks like Joe Biden is heading to the White House. But not by much. Biden will have a huge task in putting America back together again. If the Democrats do not gain a majority in the Senate this will take all the experience and ingenuity he has.

But one thing he will not have to worry about is the machine that delivers a democratic result. This remains healthy and impervious to abuse and intimidation. That should be a great comfort not just to America but to the rest of the world.