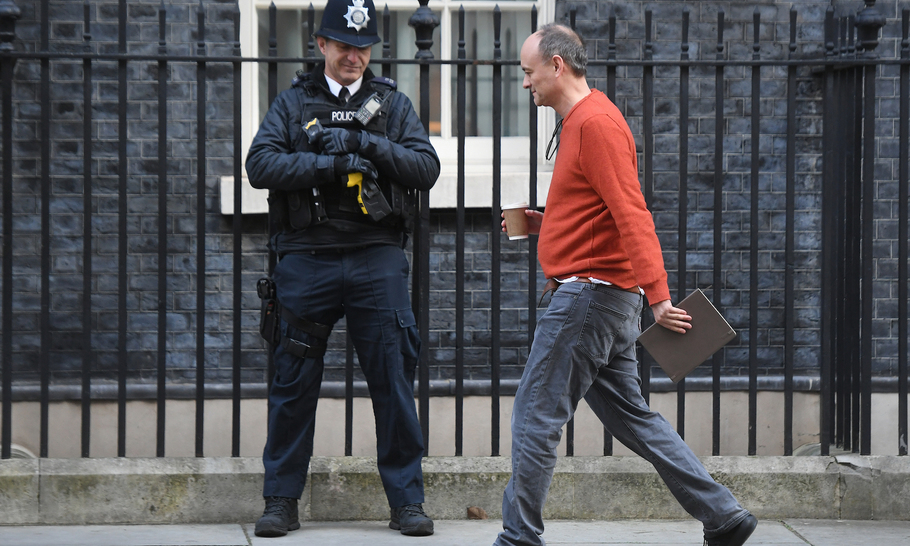 I’ve been trying hard to ignore the Dominic Cummings thing. Partly, this is because whenever Margaret Thatcher’s press secretary Bernard Ingham popped up on TV to slag me off when I was in Downing Street, I would say to my kids: “If that is ever me, doing that whole ‘wouldn’t have happened in my day’ thing, promise you will put me down.”

But when my own daughter starts to talk about Cummings in her stand-up comedy show, perhaps it is time to realise I am swimming against an impossible tide, that you cannot credibly talk about the workings of the Johnson government without trying to understand the wirings of Cummings’ mind.

You get the flavour of my daughter Grace’s show by its title, Why I am Never Going into Politics, suggesting that a life growing up in it — she was a young baby when I started working for Tony Blair in 1994 — has put her off following in parental footsteps.

She describes Cummings as “being to Boris Johnson what my Dad was to Tony Blair”. As for Cummings’ studied scruffiness, which screams out “please photograph me” every time he walks up Downing Street with his takeaway coffee and his arse hanging out of his trousers, Grace says he reminds her of posh kids at university who spend ages in front of the mirror working out how to dress in a way that disguises the fact that their parents are absolutely loaded.

Whatever similarities between then and now, me and Cummings — whom I barely know, so it is hard to judge — there are some very significant differences between Johnson and Blair. TB had a very clear agenda, knew what he wanted to do, and his team knew it too. Most of it flowed from the manifestos on which he was elected, and even when dealing with the unexpected, we were always trying to fit it all to the broader strategy of modernisation. With Johnson, it has long been clear what he wants to be — Prime Minister — but less clear what he wants to do. He is executive chairman, not CEO. That opens a gap for others to set an agenda including, dare I say, unelected advisers like Cummings.

Anyone who has read my diaries will know there were times I might have disagreed with TB, but on the broad agenda — his — I was totally signed up, and it was my job to help him communicate and deliver it, across government and in the eyes of the public.

The second big difference between Johnson and Blair is that TB was into detail. As with Bill Clinton, because they were both good communicators, who could explain complex things simply, often the media thought communication was their strong point. But they were both detail people, and with a work-rate to match. Johnson is intellectually lazy, glib, still in many ways more of a journalist than he is a politician and he skates over detail. This too opens the door to Cummings, assuming he does have an agenda separate from his boss.

The third big difference is that TB wanted strong characters around him, both in his inner circle and Cabinet, where I was but one of several who were encouraged — privately — to challenge, cajole and often criticise him. I am hardly breaking State secrets in saying that there were tensions between Number 10 and the Treasury in our time too, and Tony often toyed with the idea of sacking Gordon Brown. But when push came to shove, he saw the exceptional talent in GB, and knew the government as a whole would be weaker without it. John Prescott could be a nightmare. Robin Cook could be a nightmare. Mo Mowlam could be a nightmare. But they were big talents offering different qualities to the team that government has to be.

Sajid Javid is no Gordon Brown, but the circumstances of his removal as Chancellor, and replacement by Rishi Sunak, suggests Johnson wants ciphers, middle managers, not leaders of huge departments of state. The removal of Julian Smith from the Northern Ireland Office — the first Tory Secretary of State since 2010 to win the backing and respect of most local politicians, and who actually achieved something his predecessors had not in getting the political process moving again — underlined that Johnson’s Cabinet is no meritocracy. The juvenile chanting around the Cabinet table, of the lies he had told about new hospitals, nurses and police numbers during the election, underlined it further.

Campaigning is hard. Governing is harder. That Johnson and Cummings have earned their spurs as campaigners is beyond doubt. The 2016 referendum, and the 2019 general election, have seen to that, though in both cases they were hugely helped by their opponents. But slogans, whether written on the side of buses, or reduced to three words from a focus group, eventually get tested against broader economic and political realities. It is not happening yet. But it will.

Thanks to their campaigning skills, a broadly supine media and a largely absent Opposition, with its seemingly endless leadership election, have succeeded in getting “get Brexit done” done. By this I mean that Brexit continues to have the potential to damage both country and government, and it is not clear that either Johnson or Cummings has a plan to avoid it.

It also means that another, possibly more important slogan from the election campaign is going to become more central to the debate and to people’s lives. This one is just two words . . . “levelling up”.

It begs an awful lot of questions, none of which have yet begun to be given answers. The Budget, drafted by one multi-millionaire investment banker, now being rewritten to be presented by another, will need to provide some of them.

Successful slogans raise expectations. They will be dashed once it becomes clear how far we are from a trade deal with the EU and how we will need the extension that Johnson promised would never happen. The seats won over by the slogans in the North will be expecting to see a reversal of the public spending cuts to local government, health, education, social care and support for poorer families.

As the impact will not be felt for some time, the only way to judge them will be by comparison with better off regions of the UK. But even the best off regions have huge levels of poverty, and are struggling with the fallout from a decade of austerity. Can they level up without levelling down? Given that they have promised not to raise the main taxes, that growth forecasts are pretty dismal, the fiscal position is weak, productivity remains a problem, and even their own assessments are showing that Brexit will leave a hole that will not be easily filled, Sunak is going to have to find not just a magic money tree, but a whole forest of them.

When he doesn’t, Johnson and Cummings are going to need friends beyond those newspapers that have turned themselves into fanzines. They will discover that real change and reform require a strong centre which empowers strong ministers, and strong leaders in public services. The centre can lead, organise and strategise. But it cannot deliver without goodwill across the civil service and beyond. Which is why it strikes me as profoundly stupid constantly to communicate a message that most people in the civil service, the NHS, schools and the police, are useless, and that they need to be shaken up by weirdos and misfits with a penchant for racism and eugenics.

As Kenneth Clarke reminded Johnson shortly before, ludicrously, he was kicked out of the Tory Party, he has finally got a serious job. It is time he started doing it, and understanding that as well as coming up with snazzy one-liners, it means helping people whose homes are flooded; it means being part of events like the Munich Security Conference when all the big players of security and diplomacy are present; it means inspiring, not abusing, those who work for you; it means getting a grip of the people who represent you to others, and it means making sure they understand that it is all very well to make enemies, but there will come a time when a government and a Prime Minister need friends.