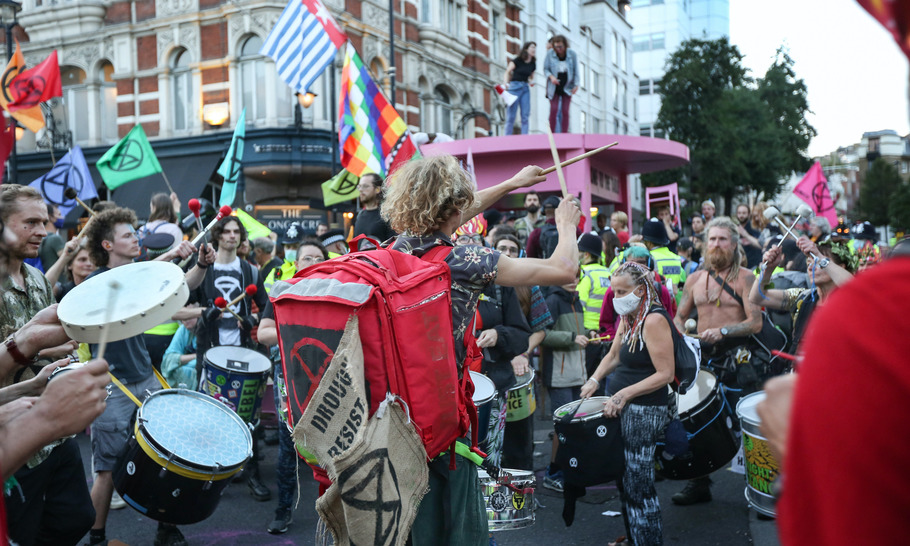 Londoners are used to protests. Barely a weekend goes by without some kind of march or demonstration in Trafalgar Square, Parliament Square or outside any number of embassies, corporations or other symbolic places. Since Victorian times, Speaker’s Corner in Hyde Park has been one of the sights of the capital. Freedom of speech and conscience require freedom of assembly to be fully effective. There are times when only a public protest can give expression to strong feelings about genuine grievances. It’s a free country, after all.

So London is braced for a promised fortnight of disruption by Extinction Rebellion. We know the form. Ordinary people may find their journeys to work delayed or even made impossible. Those going about their lawful business may be prevented from earning a living, serving customers or simply enjoying the last few days of summer because a small group of activists have decided to take over the streets to make their point. Last year, Extinction Rebellion cost the taxpayer more than £50 million, not counting the damage to livelihoods caused by their obstructive stunts.

The police are bound to be wary of intervention after the Supreme Court ruled that such disruption can be a legitimate form of protest. In what has become known as the Ziegler judgement, the right to protest may now constitute a “lawful excuse” to obstruct the highway. Ziegler is a dubious piece of judge-made law, if only because it leaves the unfortunate police unclear as to what they may do in order to keep the Queen’s highways open.

Protesters have already set up camp at Leicester Square, blocking the busy intersection of Charing Cross Road and Shaftesbury Avenue. Staff at the shops and theatres of the West End, only just getting back to normal after 18 months of pandemic, must now watch helplessly as their trades are yet again interrupted by well-heeled protesters who claim to have no other way of signalling their virtue. That great Londoner Dr Samuel Johnson once declared: “Why, Sir, Fleet Street has a very animated appearance, but I think the full tide of human existence is at Charing Cross.” Not for the next fortnight, it isn’t.

A mile or two away at Grays Inn Road, a stone’s throw from Fleet Street, anti-vaccine and anti-Covid passport protesters were meanwhile invading the headquarters of ITN. Jon Snow, the veteran presenter of Channel Four News, was accosted in the street and pursued by aggressive and abusive activists, who falsely accused him of being a paedophile. The police were again cautious, fearing accusations of “heavy-handed” tactics, so protesters were able to remain in the building for hours, demanding to see named broadcasters who had attracted their ire, before moving on to the nearby offices of Google and Facebook. Journalists are now used to being called “terrorists” by those who belong to what one might call the provisional wing of lockdown scepticism.

Two weeks ago, many of the same people had attempted to storm the former BBC Television Centre at Shepherds Bush, apparently unaware that the building had long since been converted into flats. Only a strong police presence prevented serious violence and damage to property. Earlier in the summer an illegal camp set up by the anti-lockdown and anti-vaccine movement on Shepherds Bush Green was finally removed, leaving behind so much filth and destruction that the area was closed for weeks while the council cleaned up the mess.

One consequence of these particular protests has been the targeting of GPs and other medical staff by those who see vaccination or any other measures against Covid as an infringement of their rights. Some of the most extreme anti-vaxxers call doctors and nurses “war criminals”. Evidence is growing that abuse of medical and administrative staff has grown exponentially in recent months, with London practices in particular suffering constant threats and even violence from angry patients.

The right to protest is not an absolute one, because it must always be balanced against the rights of those on the receiving end, not to mention innocent bystanders. We have known at least since John Stuart Mill that each individual’s liberty is conditional on not causing harm to others. The rule of law is fundamental to a free society — but it protects everyone, not just those who feel aggrieved enough to go out and protest. The principle established by Magna Carta, that even the state not above the law, cuts both ways. The state cannot arbitrarily remove or suspend the protection of the law from the majority of citizens merely to appease a vociferous minority of protesters. Nor is it legitimate for protesters to disobey the law merely because they disagree with it, or wish to draw attention to their cause.

Last week a group of anti-lockdown protesters tried to storm Edinburgh Castle in the name of Magna Carta and “the common law”. Quite apart from the fact that Scotland was not subject to English law in 1215 and has never been a common law jurisdiction, the protesters have a very peculiar notion of what these medieval principles entail. Online conspiracy theorists may claim that Magna Carta or the common law confer on them a right to ignore laws they consider unjust, such as those concerned with preventing the spread of the pandemic. But the common law recognises no such right, nor is there anything of the sort in the charter signed by King John to appease his barons. The most that can be said is that our legal tradition guarantees equality before the law and a fair trial for those accused of breaking it.

These principles apply to protesters too, of course. That is why it would be the height of folly for the police, the courts or the authorities to treat protesters as though they were somehow above the law. That would imply that some people — the strongly opinionated — are more equal than others. It is true that a great judge, Sir Edward Coke, once defied Charles I with the words: “Magna Carta is such a fellow that he will have no sovereign.” But Coke was protesting against a king who behaved as if he were above the law. The danger now is that some protesters have the idea that the law does not apply to them. The sooner they are disabused of this delusion, the better.

What the public expects is that protests should be policed with due regard both for the protesters and for the rest of us. It should never be permissible for protesters to target journalists who report on their activities, either by hateful abuse in their workplaces or by preventing the distribution of newspapers.

As for occupying the streets: a sense of proportion is surely necessary. You can make your point in a public place, provided you do it in an orderly way without intimidation or unnecessary disruption. But bringing London (or anywhere else) to a halt for weeks on end? Don’t even think about it. If the Metropolitan Police Commissioner, the Mayor and the Home Secretary don’t pull their fingers out to keep the heart of the capital beating, you can be sure that ordinary Londoners will make their feelings known at the ballot box — if not indeed much sooner than that.