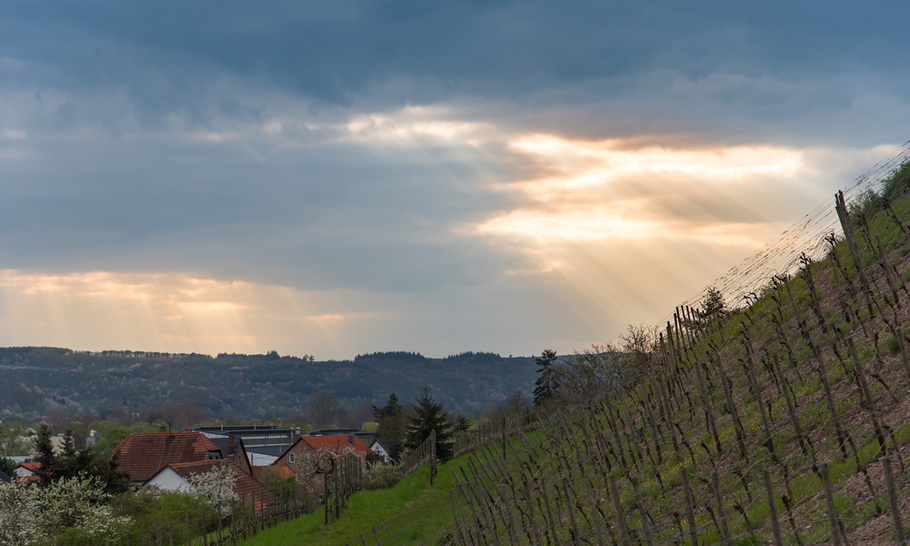 The River Nahe is a tributary of the Rhine that joins the mighty flood at Bingen, sometime home to Hildegard and the controversial poet Stefan George. It gives its name to a small wine region that makes some of the best white wines in Germany. It is warmer than the Rheingau, which faces it across the Rhine to the north, making wines that are sometimes bigger and more alcoholic — a fact noted by no lesser luminary than Goethe; but the true reason for its greatness is the variety of its primary rich soils.

The Nahe boasts red sandstone soils and those variegated slates that contribute so greatly to the character of German Riesling, but it adds another factor: once upon a time volcanoes spewed up great rocks along the banks of the river and its tributaries. Driving around the region, you still come face to face with impressive boulders that might put you in mind of a film set for the Flintstones. The region is also rich in mineral deposits, which has brought it to the attention of the ever diligent Prussians who began scouting about when the region was split between them and Bavaria after the Napoleonic Wars. The demarcation line between the two German states runs straight through the winery. The Prussians established a copper mine at Schlossböckelheim, hence the “Kupfergrube” vineyard site.

In 1901, the copper mine stopped digging and the land became one of a handful Prussian state-owned wine estates as the Staatliche Weinbaudomäne Niederhausen-Schlossböckelheim. Convicts were brought in for the arduous task of cutting terraces in the rocks and the estate produced its first vintage in 1907. Labels from the domaine must have been the most long-winded in Germany (and that is not said lightly). I have memories of scrawling down some of the most ponderous versions at tastings, such as Staatliche Weinbaudomäne Niederhausen-Schlossböckelheim, Schlossböckelheimer Kupfergrube Riesling Trockenbeerenauslese. When the new owners Jens Reidel and Christine Dinse acquired the estate eleven years ago, they renamed it Gut (or “estate”) Hermannsberg, which has spared our wrists and a fair amount of ink, although something in me still regrets the passing of those cumbersome titles.

I have been there at least twice. The first time our charabanc was too big for the narrow passes between the rocks above the Nahe, and we all had to be decanted into cars sent out from the vineyard to rescue us. The place hadn’t changed that much then: there was still an old German feeling about the public spaces. A few years ago I went out again when the weather was fully 38C in the last week in August. Now the winery boasted a swishy modern restaurant and seven guest rooms, each named after a grand cru site, not to mention a brand new press house and tasting room. We explored the different vineyards sites with the winemaker Karsten Peter before tasting the latest wines.

Nowadays almost all top German wines are bone-dry. Sweet wines, like that Trockenbeerenauslese I mentioned, are made only when the autumn continues dry and provides the right sort of weather. A few off dry or semi-sweet wines are made by top estates, very largely to please good customers in the UK. The top wines these days are the “Grosses Gewächs”, or GGs, which correspond to the grands crus of Burgundy. They are the expressions of small sites which have been known to produce great wine for decades if not centuries. There are seven at Gut Hermannsberg: Hermannsberg, Kupfergrube, Felsenberg, Steinberg, Bastei, Rotenberg and Rossel. A simple Riesling wine culled from all over the domaine is called Just Riesling, while 7 Terroirs is a blend from all seven GG sites. In addition to these there is vom Schiefer (Slate) — a second wine from Hermannsberg, and vom Vulkan, (Volcano) — number two from Kupfergrube.

With some suitable images of the Nahe in my head, I tasted these last three wines at home in London last week. 7 Terroirs is made with natural yeast and spontaneous fermentation. The first wine was released in 2019. The wine was very young and there was a boisterous whiff of sulphur which will pass with age, as well as some spritz from CO2; there was, however, that Riesling-identifying peach aroma and a lovely creaminess and a hugely impressive cooling finish.

The 2019 Vom Vulkan also had a little gas but above all the aroma of juicy yellow peaches. It was quite gorgeous, but still very much a baby. Its stablemate is the 2019 Vom Schiefer (as yet not available in the UK). This wonderfully different to the volcanic wine: the dominant fruit here was apricots, and of a delicacy that was not so fully defined in its partner. Above all it was the structure of the wine that kept giving and giving. Once the bottle had been open a while the redolence of apricots was accompanied increasingly by the aromas of limes.

It is sadly the case that Gut Hermannsberg can be hard to find in Britain but the excellent Winery in London’s Maida Vale has a list of the wines including some of the more expensive — but sensational — GGs.