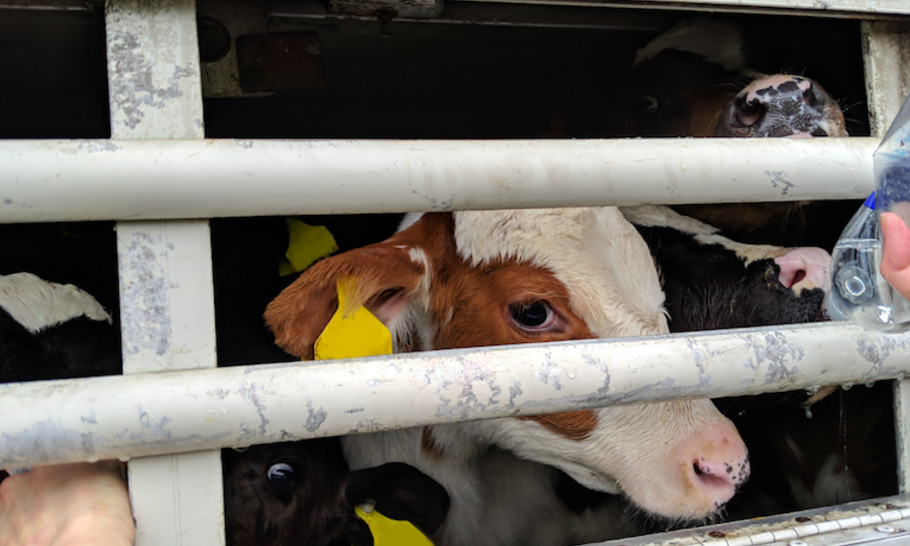 Facebook has a depressing habit of turning up photos from previous years, particularly depressing when it shows you yourself doing exactly the same thing, year in and year out.

Like awkwardly holding a banner at a Stop Live Transport rally in Parliament Square, for example, as I have done over the past few years. Today — 14th June — is Ban Live Exports International Awareness Day. A few years ago it seemed that there really was a chance that by escaping the shackles of the EU, Britain might be the first European country to call a halt to the disgusting trade in live farm animals.

Yet that dream slips away every year. Back in 2016, we were told by Leave campaigners that leaving the EU would mean the UK could make its own rules on animal transport; but the Bill which would have achieved this stalled in Parliament last November.

Thanks to this particular broken Brexit promise, animals born in the UK will be among the millions of farm animals still on hell-like journeys to be slaughtered at their destination — slaughtered, that is, if they have avoided dying of thirst, being cooked alive, trampled to death or drowned in faeces during the days and weeks of their horrific journey.

I voted for Brexit not, as my friends seem to think, because I’m an ignorant racist, but because I am sick of the hypocrisy in the EU over the natural environment and animal welfare. The CAP has ruined the English countryside; meanwhile the EU technically recognises animals as sentient… but in reality it allows bullfighting and foie gras production as “local customs”.

This week, another promise to non-human life was broken. The landscape recovery scheme, which would have turned less productive land into forests, wetlands and meadows is to be slashed from subsidies to farmers worth up to £800 million a year to a mere £50 million over three years.

Ditching a magnificent rewilding programme which would have seen many square miles of indifferent farmland become a rich, diverse habitat, in favour of a bit of token tree-planting, is clearly seen in Whitehall as being much more in tune with the grassroots Tory voter.

This is the mythical voter, beloved of cartoonists, for whom the only car is a Jag, and the only acceptable green space is dotted with 18 holes and flags. (Cravat and red face optional.)

The same mythical beast has a hysterical reaction to the idea of anyone choosing not to eat meat every day, as though daily meat consumption were a public duty; indeed it has to be petted and comforted by George Eustice, the environment secretary, who has pledged that ministers will “not lecture” people to eat less meat — presumably to avoid upsetting their delicate sensibilities. (Actually we are eating more meat than ever before, according to author Rob Percival).

You know the joke about how you know someone’s a vegan, because they tell you? Vegans have their own version:

Meat-eater: “Why aren’t you eating the steak?”
Vegan: “I don’t eat meat”
Meat-eater: “Really? But why?”
Vegan: “Well, since you ask, intensive animal farming is environmentally very damaging as well as cruel, and I just don’t want to be part of it…”
Meat-eater (clutching hands over ears): “ARRGH!! Stop forcing your extremist views on me!”

The rabidly anti-vegan Tory is an invention of the media. Most Conservatives I’ve ever met are kind and open-minded people with consciences, who are open to new ideas, and intrigued by the prospect of new markets. We are not all like those fragile farmers who fear “consumers will be misled” by plant-based products being labelled as milk, cheese or sausages (they never seem bothered about peanut butter not being butter) because guess what — most people really can tell the difference.

If you mention, as gently as possible, that 60% of mother pigs in the UK, and nearly all the pigs in the world, have to bear and suckle their young in barren cages in which they cannot turn around, or even touch their babies — and that they only see sunlight briefly through the slats of the transport lorry on the way to the abattoir — then most reasonable people, including most Tories, usually will listen. And they might even listen when you point out that pigs are just as intelligent, sensitive and affectionate as dogs.

Yet this floundering Government is caricaturing their own voters as as John Bulls, bent on plundering nature and eating themselves to death with red meat, brushing aside the huge body of evidence of where this lifestyle is leading as “green crap”. It’s really quite insulting.

Most absurd of all, ministers are touting the goal of “food security” as though our little island has ever been genuinely self-sufficient in food in the past 100 years. This is dramatically contradictory to George Eustice’s promise not to “lecture” the public to eat less meat. Food sufficiency, with the way we eat now, would surely mean digging up every inch of space, every back garden, every cricket pitch, even Wimbledon — and of course, golf courses. George Eustice’s mythical Tory voter won’t like that one bit.

However, it has been calculated that globally, if nobody ate meat, the nutritional needs of the world’s population could be met using about two thirds of the arable land now in use. Maybe even less if we supplemented our protein needs by cultivating beautiful, waving seaweed farms on the seabeds ravaged by bottom trawling.

So here is a modest proposal. To become genuinely “food secure”, therefore, the entire population of the UK could consider becoming totally vegan over the next five years. Allow animals and poultry now alive to come to the end of their lives without being forced to produce endless progeny.

We could move towards using all of our arable land to feed ourselves, and see far less waste from the food we do import. At the moment, for every 100 grams of protein we feed animals, only 43 grams gets to the humans who eat the animals; for every 100 calories, the humans only get about 30. There might even be a little land left over for nature, without digging up any golf courses.

So how about it, George? Here’s your new slogan: for food security, go vegan!