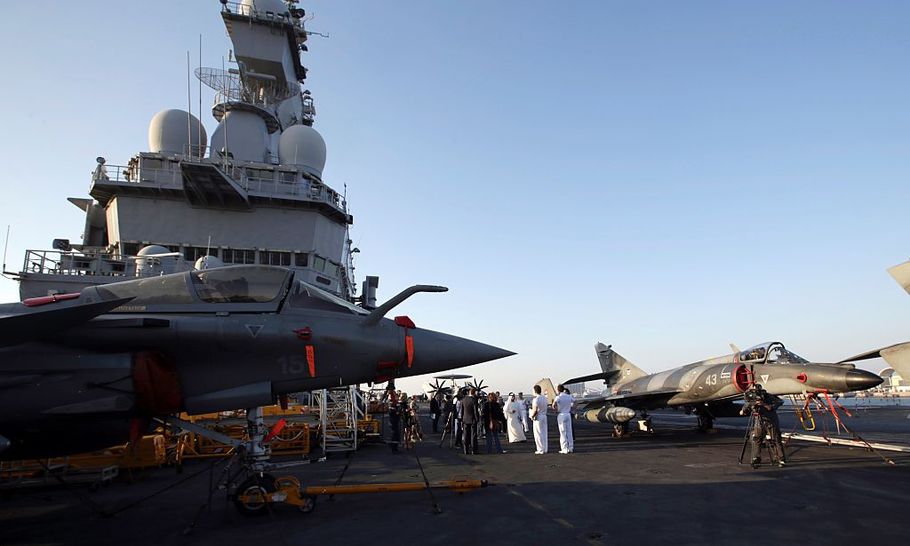 Is the world sleepwalking into yet another Middle East conflagration? Tensions have risen at the stirring sight of the mighty USS Abraham Lincoln heading towards the Gulf, where the aircraft carrier will be joined by the USS Arlington, an amphibious assault ship carrying US Marines and a Patriot missile battery, plus a bomber task force.

This concentration of American firepower is intended to deter Iran from attacks on the 54,000 US troops already stationed in the region, most of them in Gulf states or Iraq. Reports of “credible” threats to these forces have been attributed to Israeli intelligence.

The show of force is also designed to counter Iranian threats to oil tankers in the Straits of Hormuz. Four tankers, two of them Saudi, were damaged this week by bombs. Despite official denials, Iran is almost certainly behind these acts of sabotage. Iran is also backing the Houthi insurgency in Yemen, which is now mounting drone attacks on Saudi Arabia. One such attack has closed the oil pipeline that crosses the Arabian peninsula.

In Washington, meanwhile, President Trump responded to a New York Times report that the Pentagon last week revealed contingency plans to deploy up to 120,000 troops to the region. “Now why would I do that? Absolutely. But we have no plans for that,” he reassured reporters, dismissing the New York Times story as “fake news”. More ominously, he added: “Hopefully we are not going to have to plan for that. And if we did that we would send a hell of a lot more [troops] than that.”

According to the New York Times story, the man behind the Pentagon plan is John Bolton, the National Security Adviser. In the absence of a Defence Secretary (Patrick Shanahan, who serves in an acting capacity, has yet to be confirmed by Congress), Bolton has played a more dominant role and the administration is now stepping up the pressure on Iran and its European trading partners by tightening sanctions. Inside the Pentagon, officials resent White House influence — hence the leak to an anti-Trump newspaper with a history of hostility to Bolton going back to the Bush administration, in which he served as UN ambassador.

It would be a mistake to believe the received wisdom that Bolton is a “hawk” who is dragging the US into a war with Iran. The Pentagon’s contingency plan for troop deployment, assuming it exists, is just that — a plan. The despatch of a carrier strike force to the Gulf is not intended to start a war, but to deter it. Indeed, Mike Pompeo, the Secretary of State who is seen as Bolton’s closest ally, has declared unequivocally: “We fundamentally do not seek a war with Iran.” There is no reason to suppose that the President, who faces re-election next year, has suddenly abandoned his aversion to military interventions.

In any case, it would be irresponsible for the Pentagon not to prepare for a worst case scenario. One such scenario would be an Iranian attack, either directly or though its proxies, on US forces in the Gulf. Another such scenario would be an Iranian assault on Israel. Both these scenarios are unlikely, because Iran would lose. The only scenario that would provoke pre-emptive strikes would be a credible Iranian nuclear capacity: both the United States and Israel are committed to preventing such a threat from emerging. Iran’s Supreme Leader, Ayatollah Khamenei, insists that “there will not be any war with the United States”. Yet he regularly threatens to annihilate “the Zionist entity” and the regime’s belligerent rhetoric is matched by the presence of the Iranian Revolutionary Guard in Syria and attempts to destabilise Saudi Arabia by stoking the civil war in Yemen.

Europe is growing increasingly nervous at the spectacle of a crisis in the Gulf. The Spanish government has pulled its frigate out of the strike group led by the USS Abraham Lincoln. So far, the Trump administration has shown no sign of demanding Nato assistance to preserve peace in the region, but transatlantic divisions persist over the 2015 nuclear deal with Iran, from which the US withdrew two years ago.

Britain’s role is by no means peripheral in the dangerous world we now live in. This week Jeremy Hunt called for defence spending above the 2 per cent Nato benchmark. It was discourteous of the Foreign Secretary not to have given Penny Mordaunt, his new colleague at Defence, advance notice of his speech. The Prime Minister yesterday reminded Cabinet ministers of their duty to observe collective responsibility, in what was seen as an implied rebuke to ambitious leadership candidates.

In substance, though, Hunt is right. This week’s rumours of war in the Gulf are reminder never to let down our guard. As the Roman adage has it: Si vis pacem, para bellum. If you want peace, prepare for war.