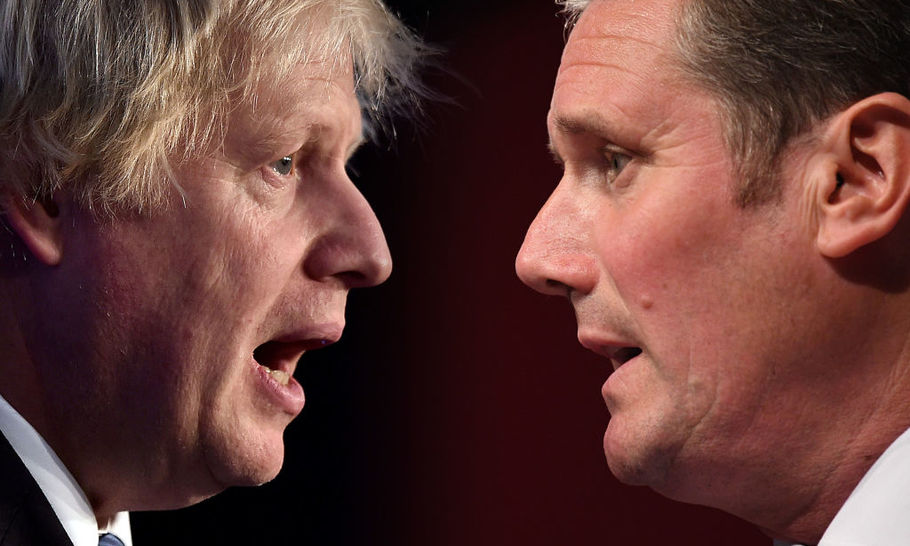 Two weeks ago I argued here that the government’s handling of Covid-19 had converted a positional problem into a valence crisis. That is, voters were no longer just worried about Boris Johnson’s policies; in growing numbers they felt that he and his ministers were dishonest, incompetent and out of touch. Dominic Cummings’s actions crystallised these valence judgements in the minds of millions of voters.

Fresh data from YouGov tells in vivid detail us what is happening. Every two months for the past year, and largely unnoticed, it has been testing the valence “brands” of the two main parties. The latest, this week, show how much trouble the Conservatives are in.

The main figures are below. On four of the six valence indicators tested by YouGov, Labour is now ahead — most notably on caring for “ordinary people” rather than “the select few”, and on “doing the right thing” rather than “serving their own interests”. 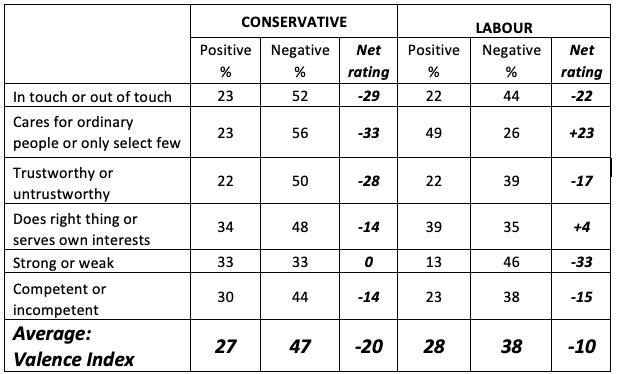 On competence, the two parties are now close together. (For months, the Tories were well ahead.) On only one issue do the Conservatives hold a commanding lead. Voters divide evenly on whether they are strong or weak, while Labour is seen as weak rather than strong by more than three-to-one (46-13%). That’s a big plus for the Tories; but it stands alone.

To make sense of all these data together, I have created a composite score, averaging the individual responses to each question. Welcome to the Valence Index. As the table shows, the Tories’ positive scores average 27 per cent, compared with 47 per cent for the negatives. This produces a net rating of minus 20. This is the party’s Valence Index. Labour’s sore, calculated the same way, is minus ten. Both parties are in negative territory, the Tories more deeply than Labour.

I have calculated the Valence Index for both parties going back to when YouGov started this series a year ago. They are shown in the chart below, and provide a new perspective of the party battle over the past 12 months. 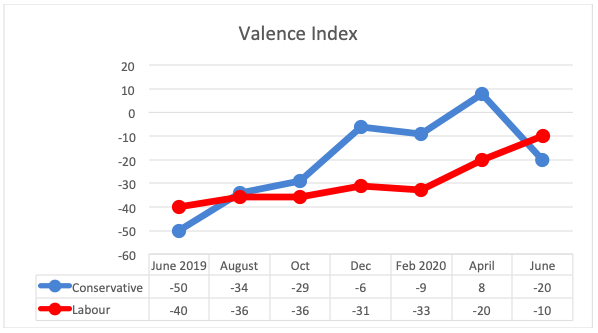 Last June, both parties had terrible ratings. No wonder that between them they won only 22% in the European Parliament elections in late May. Labour was slightly less unpopular than the Tories, both in those elections and in their valence reputations.

By August, Johnson had become Prime Minister. His party’s Valence Index had climbed by 16 points, but at minus 34 the party was still untrusted by many voters as it struggled to sort out Brexit. October saw a small improvement in the Tories’ fortunes. The big jump in their score came when Johnson managed to “get Brexit done” and fought a successful election campaign. While Labour languished, the Conservatives’ Valence Index jumped 23 points.

Not much changed in the weeks after the election. The February figures, just after Brexit took place, were similar to December’s. Then came the pandemic and, separately, Keir Starmer’s election as Labour’s new leader. Through those weeks, voting intention figures seemed to say that public opinion didn’t change. The Valence Index tells a different story. The reputations of both parties improved significantly. Starmer’s arrival helped Labour significantly — but this was offset by strong public backing for the government as it set out its plans for lockdown.

This week’s figures bring the story up-to-date; and it’s quite a story. The Tories’ Valence Index has tumbled by 28 points, from plus eight in April to minus 20 now. In contrast, Labour has continued its upward trajectory, from minus 33 in February, to minus 20 in April, to minus ten this week.

These figures help to explain why the Tories’ big lead in voting intention has crumbled in recent weeks. But why isn’t Labour now ahead, as its Valence Score suggests it should be? Two other findings suggest that the party has started to win voters round, but hasn’t yet sealed the deal. First, YouGov asked whether “Keir Starmer looks like a Prime Minister in waiting” — 40 per cent say he does, while 32 per cent say he does not. That net score of plus eight compares with minus one in April.

However, when the same people were asked whether “the Labour Party is ready for government”, only 20 per cent said it is, while 57 per cent said it isn’t. This net rating of minus 37 is not as bad as the minus 57 it scored under Corbyn in January, but it is still far too low for a party wanting to return to government.

These figures echo what happened in the run-up to the 1979 election. James Callaghan, Labour’s Prime Minister, was more popular than Margaret Thatcher — but voters still wanted to punish Labour for the public sector strikes in the “winter of discontent”. The Tories won and stayed in power for the next 18 years.

The current improvement in Labour’s Valence Index is largely down to Starmer himself. The legacy of the Corbyn years will take time for the party as a whole to shake off. If and when it does, its Valence Index is likely to climb into positive territory, and it can expect to overtake the Conservatives in voting intention.

Whether it can keep that lead is, of course, another matter. The next election is probably four years away. But whatever happens, the Valence Index will help to explain why.