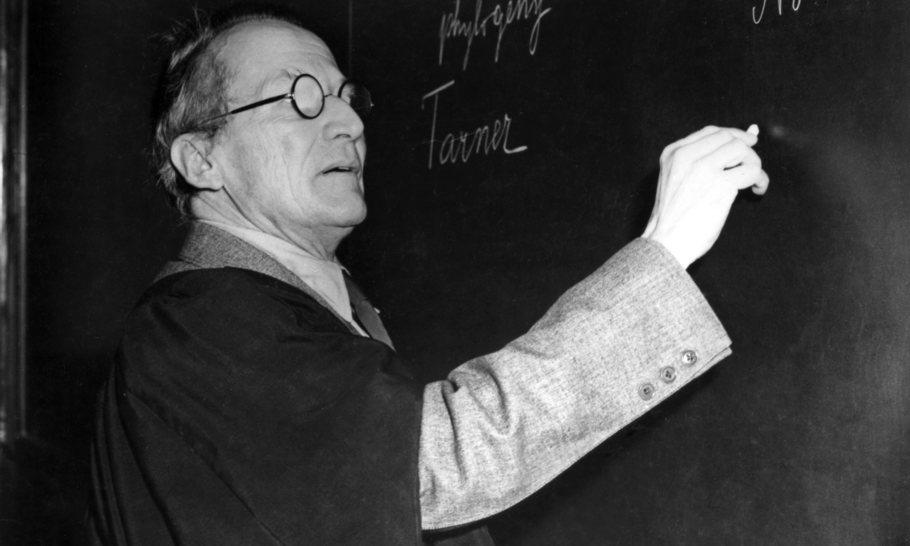 Schrödinger’s Cat is a famous emissary from Quantum Theory. The Austrian physicist Erwin Schrödinger thought up the idea to display the enigma of a quantum particle being simultaneously in two different states. A cat is shut in a box containing a quantum system that either releases a poison and the cat dies; or does nothing and the cat lives. The interior of the box is disconnected from the world outside, but when opened the two states coalesce into one, and the cat is found either alive or dead.

In the meantime, sealed within the box it exists in a “superposition” of two states: cat-alive and cat-dead. Mathematically speaking, this quantum-superposition is expressed in terms of a wave that can interfere with itself, but when the box is opened, when we make an observation, the wave collapses into one state or the other.

The very fact that any observation we make disturbs the balance of the quantum world should be viewed with joy rather than frustration. We are not aloof from the universe we inhabit. In Einstein’s Theory of Relativity “observers” are passive, and the old concept of simultaneity vanishes. If two events cannot be separated by a ray of light from the future of one to the past of the other, then it makes no sense to say which came first. Using conventional measuring standards, two observers may disagree on which one precedes the other, making for a curious  world that we comprehend in terms of a space-time continuum rather than just space on its  own, with time as separate concept.

The quantum world is altogether different, and as Carlo Rovelli expresses it in his charmingly idiosyncratic book Helgoland, “is more tenuous than the one imagined by the old physics; it is made up of happenings, discontinuous events, without permanence. It is a world with a fine  texture, intricate and fragile as Venetian lace”. Rovelli is the author of previous short books such as Seven Lessons in Physics and The Order of Time, showing himself to be perhaps the finest author now writing on physics and the quantum world. He draws on philosophy, such as Heraclitus’s assertion that everything is in a state of flux, and on literature, notably  Shakespeare’s Tempest, quoting at length from Prospero’s speech in Act IV about “the  baseless fabric of this vision” having faded and left “not a rack behind”.

The Helgoland of the title is the German name for Heligoland, the sacred (“heilig”) island in the North Sea, where in 1925 Werner Heisenberg, one of the progenitors of quantum theory, found inspiration for his bold ideas. These were quite different from the wave formulation of Schrödinger. For him, and for Rovelli, the heart  of the matter is the treatment of the position X and momentum P of a particle in terms of  matrices rather than simply numbers, expressed in the formal simplicity of an equation  showing that X times P is not the same as P times X. The difference is expressed using Planck’s constant, a measure of how small things have to get before the fabric of space-time  fractures.

Quantum theory has always been difficult to grasp, and as the famously eloquent physicist Richard Feynman said, “If you think you understand quantum mechanics, you don’t understand quantum mechanics”. How does Rovelli fare in explaining it? He doesn’t shy away from puzzling things like entanglement, where two particles A and B in different places can apparently be in a dance with one another. If you find A in a blue state (to use his colourful  terminology) you find the same for B, if A appears red, so does B. The states (blue and red) are in superposition and only reveal a particular colour at the moment of observation. How is  this possible? It sounds nonsense because the two particles can be separated so that no  message can reach from one to the other even at the speed of light. There is no conceivable connection, yet they seem to dance together with not the slightest communication between them. Rovelli explains it in terms of relative information available to you, the observer, and calls it “a dance for three”.

Information is key, and he encapsulates the distinction from classical physics in two facts, or postulates:

At first sight these seem to contradict one another. If something is finite how can you always  acquire more of it? But the key word is “relevant”!— information that counts in predicting future behaviour. My own imperfect analogy is the back-up disc for my computer. It only takes a finite amount of information, but I can always add more. It simply deletes back-ups that are no longer relevant. Rovelli returns to this point towards the end of the book when he  discusses human vision. “When we look around ourselves, we are not truly ‘observing’: we are instead dreaming an image of the world based on what we know (including bias and  misconception) and unconsciously scrutinising the world to reveal any discrepancies which, if necessary, we will try to correct”.

As for “observing” the quantum world, we inevitably interact with it, and this takes us back to the error we make in assuming an observer can be aloof from what is happening. The fact that there is no such observer is a crucial difference between Relativity and Quantum Theory. In a sense it answers a question I had as a teenager, seeing the space-time continuum as a whole, combining past and future in an embrace of all space-time. As Rovelli writes, “If we  imagine the totality of things, we are imagining being outside the universe, looking at it from out there. But there is no ‘outside’ to the totality of things. The external point of view is a point of view that does not exist.”

As well as such philosophical assertions, Rovelli is also poet, “For a moment even these  sensations melt. I close my eyes and see bright lakes of vivid colour parting like curtains,  through which I feel I am falling. Is this also reality? Violet and orange shapes are dancing,  and I am no longer there. I take a sip of tea. Stoke the fire. Smile.”

As for quantum superposition collapsing the instant we observe it, as with Schrödinger’s Cat when we open the box, Rovelli suggests that the poison be replaced by a mere sleeping draught. Rather than cat-alive and cat-dead, one then has cat-awake and cat-asleep. This is less clearly defined than the point Schrödinger was making, but then the great man himself was perfectly happy to be in two states at the same time, and when he applied for residence in Ireland in 1938 he requested a visa for his wife and another woman with whom he had been in a ménage à trois for many years.