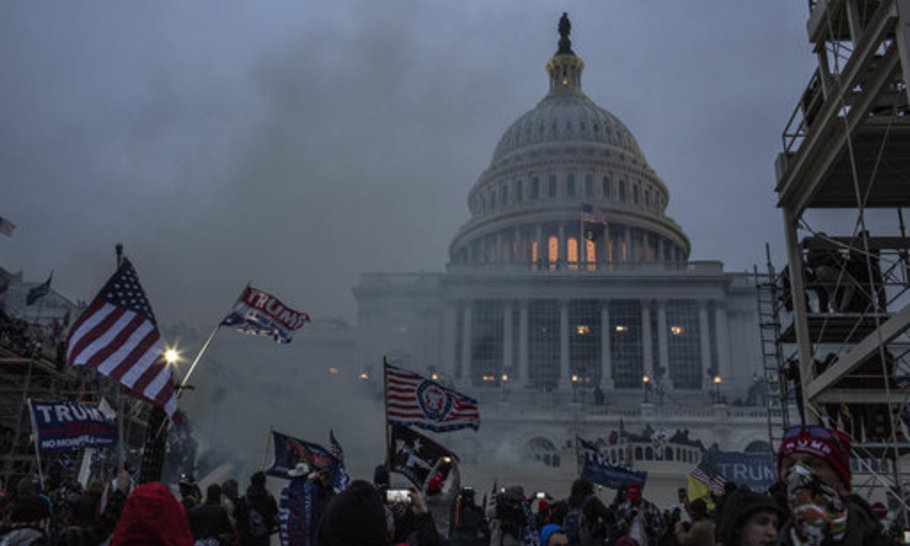 This week’s shameful scenes in Washington DC, witnessed by a disbelieving world, bring the Trump presidency to a calamitous close. Images of the mob invading the Capitol, desecrating that temple of democracy, will live in infamy. For once, those overfamiliar lines from “The Second Coming” by WB Yeats really are apposite:

Mere anarchy is loosed upon the world,

The blood-dimmed tide is loosed, and everywhere

The ceremony of innocence is drowned;

The best lack all conviction, while the worst

Are full of passionate intensity.

The fact that this disgraceful spectacle did not end in a full-scale bloodbath is the only consolation for the majority of us in the West who admire and cherish the United States and all that it stands for. A woman protestor was shot dead in the chamber after she ignored warnings by police and secret servicemen; another three people are reported to have died from “medical emergencies” during the chaotic occupation. In general, however, the security forces showed remarkable restraint, despite the fact that some of the Trump supporters were armed. Elsewhere, such a dangerous insurrection would not have been suppressed without even uglier bloodshed.

There is little doubt where responsibility lies for this “stain on our democracy”, which as the Republican leader in the Senate Mitch McConnell lamented, will “not so easily be washed away”. This time, President Trump cannot escape the blame with the prevarications, obfuscations and outright lies to which Americans have become accustomed over the past four years. Nobody now listens to the conspiracy theories outside his alternative universe. That shadowy world is inhabited mainly by far-Right extremists, the most fanatical votaries of what has become a cult of The Donald.

Yet enough of them had gathered in the National Mall on Wednesday for him to incite them to march on the Capitol. It was the President who encouraged them in the delusion that they could stop Congress from certifying the results of last November’s elections. It was the President who denounced fellow Republicans — including his own Vice President, Mike Pence — for failing to halt the democratic process. It was the President who unleashed the mob, who refused to restrain them until it was too late, who failed in his duty to uphold law and order. The guilt for all this lies squarely at the door of the White House.

In a few days’ time, the present incumbent will no longer be President — just plain old Donald R Trump. His successor, Joe Biden, used solemn language in his rebuke. He called it “an assault on the most sacred of American undertakings: the doing of the people’s business”. The storming of the Capitol “borders on sedition”. The President-elect called on the President “to fulfill his oath and defend the Constitution and demand an end to this siege”. This was not protest, he declared: “It is insurrection.” He concluded with a paean to the best traditions of American democracy. “And this God-awful display today is bringing home to every Republican, Democrat and Independent in the nation that we must step up. This is the United States of America. President Trump, step up.”

And he did, after a fashion. Belatedly, Trump tweeted his supporters to go home. Congress was allowed to continue its work of affirming Biden’s victory, which it has duly done this morning. As I write, the outgoing President has yet to make amends for his incitement. He never apologises, never explains. But the damage he has done is not merely to his own reputation — he has dragged his office through the mire.

Once Biden is installed in that office, there will have to be a reckoning. Sooner or later, President Biden will have to decide whether to pardon former President Trump. Will he do so? These columns have raised this question before, but Trump’s conduct since his defeat has been incomparably worse than anything he did before it. It is no longer just a matter of possible varieties of misconduct, but of flagrant defiance of the spirit and, almost certainly, the letter of the Constitution. By refusing to accept a defeat which, as Senator McConnell acknowledged yesterday, “wasn’t even close”, Trump has put his country’s political system in jeopardy.

The only historical comparison is Watergate. The damage there was largely done by the cover-up. Unlike Nixon’s dirty election campaign, Trump’s outrageous attempt to subvert the democratic process in the last two months has been done in broad daylight. His are high crimes and misdemeanours of a different order.

Nixon was pardoned by his own former Vice President, Gerald Ford. In normal times, party should make no difference. But these are not normal times. Biden will have to weigh carefully the question of whether he is obliged by prudence or precedent to pardon Trump for anything he did in office. His instinct should tell him that a man who debauched the Constitution should face the consequences of his actions. As against that, many will say that the office of President would be damaged still further by the trial and imprisonment of Trump. It would seem to many of the 74 million Americans who voted for him that this was victor’s justice — the revenge of the elites. That is as may be. In Israel, both a prime minister and a president have been jailed, respectively for corruption and rape. Neither office was damaged by justice being seen to be done. In the American case, the Supreme Court would doubtless have the final say. It has a conservative majority and includes three justices appointed by Trump himself. If such a court confirmed any verdict and sentence handed down to a former President, both domestic and international opinion would surely accept it.

The question of a pardon for Trump may well be Biden’s first big decision in office. He must already have pondered it. Justice must always be tempered with mercy. Trump himself has shown nobody any mercy. If he is fortunate enough to receive it, he should do the decent thing: retire to his golf course in Scotland and live out his life in penitence and obscurity.