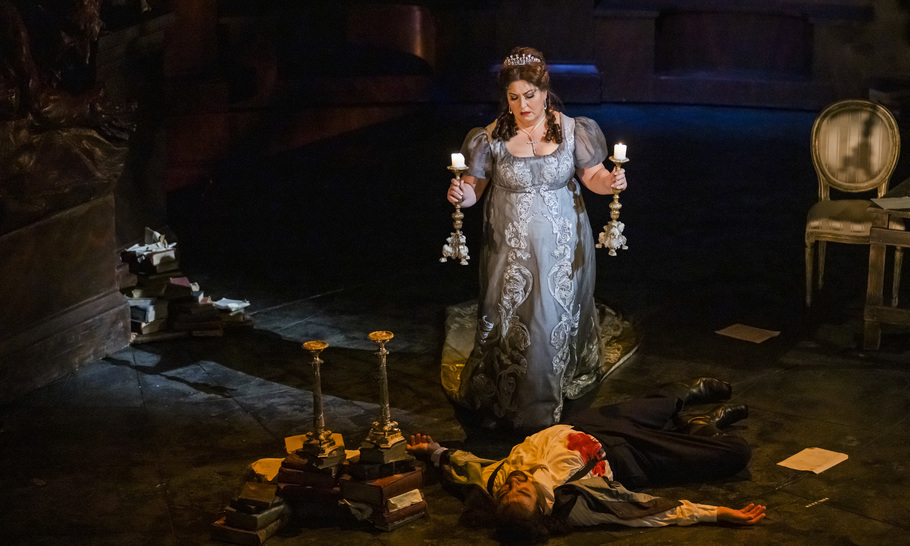 There may be problems with the libretto of Puccini’s Tosca, as Ernest Newman explains in his excellent book More Opera Nights, but the performance by the Royal Opera’s “B Cast”: Anna Pirozzi (Tosca), Freddie de Tommaso (Cavaradossi) and Claudio Sgura (Scarpia) knocked such concerns right out of the ball park. This was singing at its finest, characterisation at its most convincing, and musical performance at its greatest intensity under the baton of Ukrainian conductor Oksana Lyniv.

The Italian soprano Ms Pirozzi recently showed her colours at Covent Garden with a stunning performance as Lady Macbeth in Verdi’s first Shakespeare opera, and the youthful presence and ringing tones of 27-year old Freddie de Tommaso, son of an Italian father and British mother, gave Tosca’s lover, the painter Cavaradossi, a hugely attractive quality, a fine contrast to the usual more mature tenors who often perform that role at the world’s top opera houses. His recondita armonia (hidden harmony) in early Act I, comparing the beauty of his beloved Tosca with that of the woman whose face he has been painting on the mural, elicited spontaneous applause and the performance only got better as we were propelled forward by the power and stage presence of Claudio Sgura as Scarpia, the handsome but sinister chief of police.

In Jonathan Kent’s excellent production the vitality of life, exhibited in the way the choirboys fool around, is wonderfully contrasted with an ominous feeling of death as Scarpia enters, searching for the escaped prisoner and former consul of the Roman Republic, Angelotti (a small part wonderfully sung by Ukrainian baritone Yuriy Yurchuk).

The characters may be fictitious but the events are real enough and took place on the night of 17 June 1800. Puccini and his librettists did an excellent job of basing their three-act opera on a recent French play by Victorien Sardou, and the atmosphere is quintessentially Italian. Scarpia is a shrewd detective who can see how to use Tosca for his own ends in pressuring Cavaradossi, and revealing Angelotti’s hiding place, before taking her to emphasise his sexual dominance. Her kiss is a stab to the heart with a dagger, as any Italian woman of the time might have defended herself with the stiletto she used as a hair ornament.

The libretto may have its problems, including the “full moon” Tosca refers to when on the date in question it was in its final waning phase, and would not have risen until shortly before dawn, but such considerations are irrelevant to the success of the opera. Ms Pirozzi’s plaintive Vissi d’arte (“I have lived for art”) in Act II gently plucked at the heart strings, and De Tommaso’s E lucevan le stelle (“And the stars were shining”) in Act III emerged quietly as he knelt on stage before rising to sing that he has never loved life so much. It is a great moment before his supposedly “fake”, yet all too real, execution, and after Tosca escapes capture and jumps to her death over the battlements of the Castel de Sant’Angelo the audience rose to their feet to cheer. Cast B it may have been, but this Tosca was immaculately performed and utterly riveting.