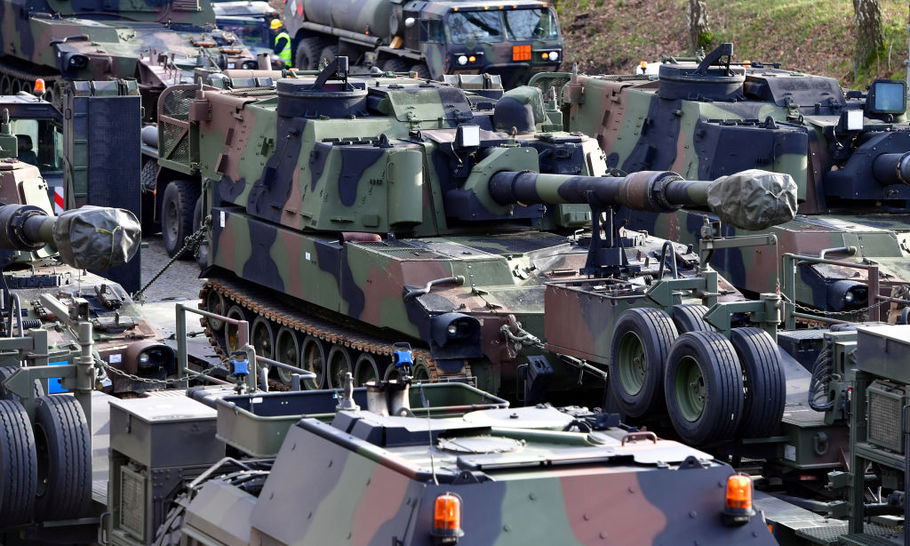 Some long-time observers of US strategic policy may think they are watching a replay of the Richard Nixon madman gambit, first played out in the negotiations to end the Vietnam War. Frustrated by American military failure and the intransigence of the North Vietnamese, Nixon instructed his lead negotiator, Henry Kissinger, to imply that the President of the United States existed on the very edge of rationality and could behave with reckless abandon if pushed too far. The only difference today is that Donald Trump is so much more convincing in the role and the announcement of a major drawdown of American troops in Europe joins a series of other military strategic decisions that may make sense within the unknowable recesses of the President’s mind but bear little scrutiny in the real world.

In fact, compared to, say, the precipitate withdrawal of US forces from Syria, the decision on troops in Europe is neither capricious nor arbitrary. America has borne the costs of two hot and one cold war in Europe and will simply no longer pick up an open-ended tab. In American eyes, this is not just about the material cost of military presence but also the moral decadence of European nations whose indulgent social provision comes at the opportunity cost of funding their own defence. Little surprise then, that freeloading and delinquent feature so prominently in the Presidential lexicon.

So he has a point, but nursing a grudge does not necessarily produce sound strategy. Europe’s problems hardly need re-stating: it is weak, ageing and indebted, caught between federalists and nationalists, neo-liberals and populists, a profligate south and a frugal north, Emmanuel Macron and Victor Orban. Add to all that the turmoil of Covid-19 and the withdrawal of American troops looks just plain dumb. It is an act that owes more to symbolism than substance but still threatens a rift in Western solidarity, the compromise of Nato and the encouragement of Europhile fantasy. At the level of grand gesture politics, it really matters.

But there’s another, more nuanced picture that we should look at. European security is almost entirely calibrated against the threat from Russia, so maybe the starting point should be the view from Moscow. A significant part of that view will be the residual bitterness at the scale of convulsive change in the 30 or so years since the end of the Cold War. In quick succession, the then Soviet Union became a spectator to the re-unification of Germany, the loss of its Warsaw Pact satellites and the complete dissolution of that alliance in January 1991. It stumbled through a series of Ruritanian attempts to retain wider influence but settled for a singular, reduced Russian national identity on 25 December 1991. Contrary to earlier Nato assurances, the western alliance soon reached Russian borders, an uncomfortable position for a country invaded four times in the preceding 150 years.

At home, life expectancy for Russian men fell by eight years, capital flight averaged $1.5 billion a month, productive capacity fell by a compound 8 per cent year on year from 1989 to 2001, the number of people living in poverty rose from 14 million in 1989 to 147 million in 1998, criminality became endemic and mortality rates reached levels only previously associated with general war. Finally, the cultural and spiritual entity defined by language, Slavic identity and orthodox religion — the foundational elements of Russian civilization — lost its sense of collective identity. Overall, it was a social, cultural and economic catastrophe without precedent in peacetime.

No surprise then that a Russia burning with resentment has sought to get even. But, as we’ve already observed, nursing a grudge does not necessarily produce sound strategy and the Russian dilemma has been how to re-establish its place in the world with such diminished levels of hard, military power. It got worse before it got better and the first Chechen War of 1994-96 was probably the nadir of Russian arms, when poorly trained conscripts were eviscerated by Chechen separatists.

Vladimir Putin assumed power on New Year’s Eve 1999 and even the most grudging observer would have to concede that, in terms of Russia’s military condition, he has played a bad hand well. The military reforms he initiated have had three strands: asymmetric, conventional and nuclear.

The asymmetric strand is most closely associated with General Valeriy Gerasimov, chief of the Russian General Staff and author of the eponymous doctrine. Gerasimov’s published work sees a roughly 4:1 ratio between non-military and military measures in the escalation to something recognisable as conflict. Non-military measures include links to organised crime, state and freelance hackers and what he describes as digital militias as well as more traditional instruments like political, economic and diplomatic manipulation. This leads to Russia surfing the boundary between subliminal effect — where operations go undetected — and what is becoming known as liminal warfare, where operations are detected but sufficiently ambiguous to be deniable. If caught with their fingers in the till, Russian practice has been to resort to bare faced lying, as the shooting down of Malaysian Airways flight MH-17, the Litvinenko and Skripal poisonings and the Estonian and Georgian cyber-attacks attest.

The core Gerasimov contention is that, if these pre-conflict moves are conducted well enough, then eventual recourse to naked military power simply acts to confirm the pre-existing condition established by shaping operations: the enemy is defeated before he even knows he’s at war. The Gerasimov doctrine is about finding a way around Russia’s military weakness, relative to western — primarily US — power. Making the best of a bad job is not an ideal premise, but the track record of success in the Baltic states, Georgia and Ukraine demands that we pay attention.

In conventional operations, the traditional Russian reliance upon mass is no longer available and more novel solutions to improve military efficiency have been required. The process was led by defence minister Anatoly Serdyukov in the “New Look” programme, which ran from 2008 to 2014. In what amounted to the most radical set of reforms since the creation of the Red Army in 1917, Russian forces were streamlined and professionalised to produce a structure led by high readiness forces able to deploy into battle with minimal warning. Cyber and Special Operations Commands have been created and an emphasis placed on the large scale use of precision munitions, special forces and robotic operations, with barely a main battle tank in sight.

But it is in nuclear operations that perhaps the most startling changes have occurred. Russian doctrine has always seen nuclear weapons as available for battlefield use and not maintained for primarily deterrent purposes. This principle has been developed with singular focus to produce highly accurate warheads with an explosive power as low as 300 tons of TNT and minimal long term contamination. Again, this is designed to address structural weakness, but in Russian eyes nuclear weapons are not unusable superweapons but large calibre field artillery. In turn, this has allowed the development of the principle of “interchangeability of fire and forces” which means that a given number of troops has an equivalent effect to a defined volume of massed firepower. Weight of fire (nuclear, conventional, cyber or electronic) can therefore compensate for a lack of physical mass.

So how would all this work in practice? The first thing to say is that there would be a seamless connection between the manipulation of social media and nuclear release. Unlike the west which is obsessed with conventional force levels, has never developed a sophisticated doctrine of subliminal and liminal manoeuvre and regards nuclear operations as a separate realm, Russian military thought sees the entire continuum as unbroken and indivisible.

In a worked example in, say, the Baltic states, shaping operations are taking place now and constantly exploring the subliminal/liminal boundary. These might create the conditions for an opportunistic land grab by high readiness conventional forces able to move more quickly and decisively than their Nato equivalent. Faced with an eventual Nato response, Russia might then “escalate to de-escalate” by threatening to use battlefield nuclear weapons. Would an American president risk an inter-continental exchange in response to the threat of the single loud bang of a tailored battlefield nuclear device? Probably not.

Necessity has been the mother of invention for Russia, and, faced with the implosion of both its military forces and every conventional wisdom about how they would be used, it has returned to first principles to produce a force structure and a doctrine for its use that looks subtle, agile and fit for contemporary purpose. The requirement for Nato is to fully comprehend these innovations and respond accordingly. Taken against this imperative challenge to the western military imagination, the physical presence of a few thousand American troops is neither here nor there.